I break the velvet silence between us with what I believe must be mundane questions, such as “How are you?” and so on. But Miss Rojas always finds a meditative and introspective way to answer, capturing in her special way, BIG emotions on a small scale, with a poetic concentration that only an artist with her particularly powerful calibre can. Her answers are short, spoken intimately as if for me alone. Yet there is nothing hermetic about her approach at all. Gently, insistently, quietly, she draws me into her world – which is all melody and wonderfully chordal – and the effect is always thoroughly absorbing. I ask her if her gorgeous auburn hair has grown back again (after the virulent chemotherapy that she had recently been through) and first she laughs disarmingly, with a bright child-like giggle, then she sings a short line in praise of God and it is as if a whole Barcarolle has unfolded, its rhythms exploding like a box of rioting crayons, the echo of which beams its dynamic melody across the stratospheric miles that separate us: “By the grace of God…” (She breathes into the telephone). “He is a mighty God, and he is good,” she says.

The disc in my player runs out and I switch it back to the beginning. Felicidade begins to play, and Berta Rojas’ fingers make the song shimmy out of the speakers like a diaphanous gown unfurling. Song after song plays and I live each moment in the present, looking ahead and trying to fix my mind’s eye onto some distant point from where it appears safe to look back. Throughout, I feel as if I am in the presence of the finest of 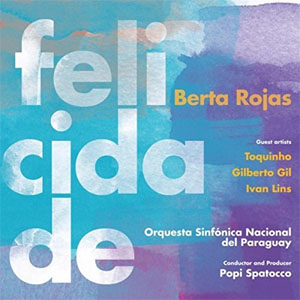 tour guides as Miss Rojas ushers me into secret spaces in of her choosing in a Brasil I am ever-grateful to discover. As Pliny once said, albeit in a different context, I feel that I am “choking with gold”. The history of Brasilian, in the spirit of the music, is gently unfolding as I follow Miss Rojas, walking past the long, long sleep of kings: Vinicius de Moraes, Antonio Carlos “Tom” Jobim, Ernesto Nazareth, Baden Powell de Aquino, Heitor Villa-Lobos, Dilermando Dos Santos Reis… Their great names echo with legends of valour and epic stories, their waking and sleeping marked by iconic songs emerging from effervescent pens overflowing notes to sing in songs that will last forever. Miss Rojas makes each song a magnificent votive offering as if in a cathedral, joined here by three great Brasilians: Gilberto Gil, Toquinho, Ivan Lins. “A distinct honour,” was how she described the experience.

Berta Rojas is on song. Her music is coming from the springtime of her being. Her guitar is a small orchestra. It is polyphonic. Every string is a different colour, a different voice. She is playing softly now; then a little louder as the strings of Orquesta Sinfónica Nacional del Paraguay begin to argue with her. She finds her voice and begins to illuminate the melody of “Homenaje a Baden Powell” a rare composition by her and her guitar opens like a great tome from Jorge-Luis Borges’ mythical library Tlön, Uqbar, or Orbis Tertius. Miss Rojas then proceeds to reveal the guitar’s huge vocabulary of sounds and effects – song after song – that combine to make it sound as big as an ensemble, but which have always needed her insight to deploy effectively. Her sounds range from harmonics and pizzicato to technique exotica, such as ‘nut-side’, ‘nail sizzle’ and ‘bi-tone tapping’ (plus) she suddenly unleashes a battery of percussion possibilities (on Paulo Bellinati’s “Jongo”, for instance) as if her guitar has come with a drum set attached.