I am astounded by her technique and find, when I ask her about it, that she practices incessantly. She used to practice a lot more before her troubles, I find out. But now she is much more relaxed and makes time for many other things in life, such as events dedicated to women, women musicians and women who have come through breast-cancer, and to children – especially those who are severely underprivileged: For instance, she was joined by La Orquesta de Instrumentos Reciclados de Cateura (literally the Recycled Instruments Orchestra of Cateura) played by children on instruments recycled from rubbish that they (the children) mine on the Cateura landfill on the outskirts of Asunción, haunted by these very children to eke out a meager existence. The song was Edin Solis’ “Tambito Josefino” and the album was Salsa Roja (ON Music, 2013) from which she began a Latin-American journey, albeit kick-started by an earlier encounter in Paraguay with Paquito D’Rivera, a recording entitled Día y Medio (ON Music, 2012). Those efforts resulted in a musical adventure in Argentina, Historia del Tango (ON Music, 2015) where Berta Rojas and Camerata Bariloche undertook to re-discover and re-imagine the work of Mariano Mores, Aníbal Troilo, Ástor Piazzolla, Virgilio Expósito, Julián Plaza and Anselmo Aieta. Here Miss Rojas was joined by Carlos Franzetti, whose magnificent arrangements animate the record like glimmering gems. It is also here where the guitarist came to work with Popi Spatocco, who conducted the Camerata Bariloche, and returned again later to (produce and) conduct the Orquesta Sinfónica Nacional del Paraguay, on Felicidade.

By then the die was cast. “I have a dream,” Berta Rojas tells me when we speak, “Of travelling throughout the length and breadth of South America to bring the great traditions to life from everywhere I go.” “What a wonderful idea!” I find myself saying to her. “And what a tiring journey that will be by the end of it all,” I add, thinking of how much of a strain it will be on her spry body as it recovers from the exhaustion of her two-year sorjourn to bring Felicidade to fruition from the day it took birth as she (Miss Rojas) began to feel the urge to glorify the unique (in all of South America and, indeed, the world) and extraordinary guitar music tradition of Brasil. The very thought of Berta Rojas 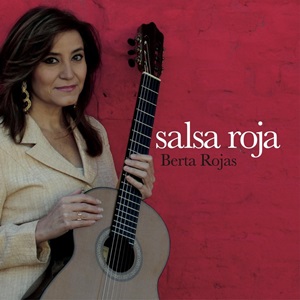 making circling North and South America, and even branching out to Europe to promote Felicidade exhausts me. I ask her how she thinks she will feel doing all the legwork. “It is a labour of love,” she shoots back. “For me the enigma of arrival at my destination is so exciting, it fills me with energy,” she says. “No time to feel the melancholy of departure,” I tell her, as images of the pre-surrealist paintings of Giorgio de Chirico flash by. “Besides the feeling of being alive in the music is a beautiful way to begin each day,” she adds, as if icing a delicious marble cake before my eyes. “There is nothing more beautiful than to be sustained by music, from the word ‘hello’ to the word ‘goodbye’… what else is there in the world, after all, but ‘hello’ and ‘goodbye’” she says to me. I struggle to hold back the tears that suddenly fill my eyes; then run down my cheeks to my trembling lips. Are they tears of joy? Or sorrow? I cannot tell. But they taste bittersweet.

(I would be remiss if I did not thank Diane Blackman, Miss Rojas’ publicist, for putting up with me and my requests; and offer a cornucopia of gratitude to Berta Rojas for making time to speak with me)