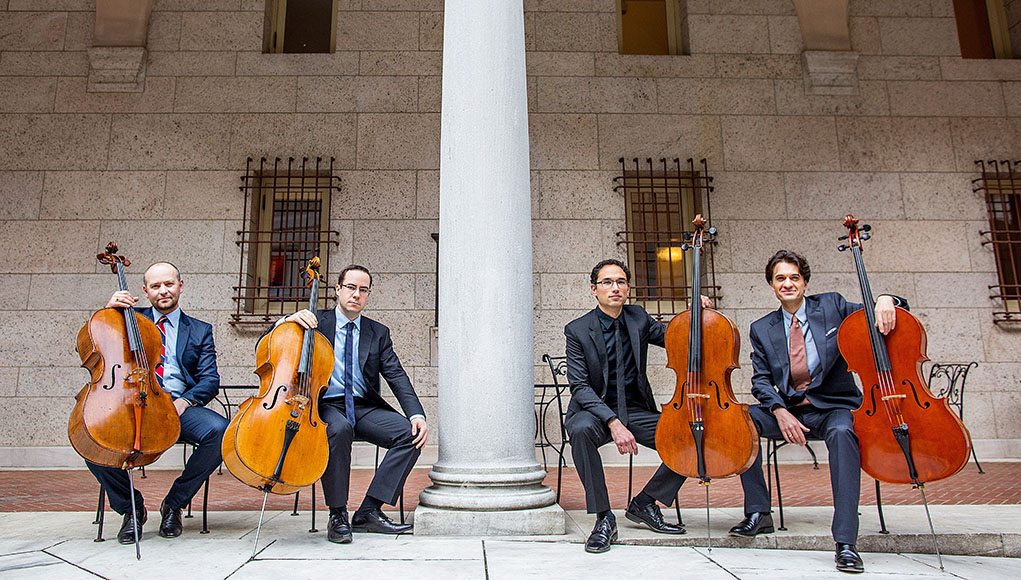 The first of its kind in the history of the Boston Symphony Orchestra, the Boston Cello Quartet was founded in 2010 by the Boston Symphony Orchestra cellists Blaise Dejardin, Adam Esbensen, Mihail Jojatu and Alexandre Lecarme. Since its acclaimed debut concert, the BCQ has quickly won the hearts of music lovers through their own arrangements of staples of the classical music repertoire, as well as jazz, contemporary works, and even comic medleys, all which showcases the limitless possibilities of the instrument they love. Favorites of the Tanglewood audience, the quartet opened for the Grammy Award-winning rock band Train at the Koussevitzky Music Shed in 2011 and two years later was featured as a solo group for Tanglewood on Parade, performing the James Bond Concertino with the Boston Pops and Keith Lockhart.

Arranged by Grammy-nominated composer Chris Walden, this unique concerto for cello quartet and orchestra was specifically commissioned for the Boston Cello Quartet by the Boston Pops. The premier took place at Symphony Hall in May 2013. In September 2013, the Boston Cello Quartet became the first chamber music group to be featured on ESPN and MLB.com, performing the National Anthem and Metallica’s song Enter Sandman at Fenway Park, in honor of baseball legend Mariano Rivera. Their first album, Pictures, was released in February 2013 and quickly rose to the Top 50 Classical Music Albums on iTunes. The Boston Cello Quartet also recorded Olivier Deriviere’s soundtrack for the videogame Of Orcs and Men, released in 2012 on Xbox 360, PS3, and PC.

Breaking barriers would be a likely aphorism for the Boston Cello Quartet. This might seem like a cliché but it is far from that. Boston Cello Quartet, or BCQ, as they are called has braved inclement musical weather to play almost everything from the American National Anthem to Metallica, a video game soundtrack to iconic classical pieces with Yo-Yo Ma and music with the Boston Pops. The four members of the BCQ parley with the familiarity of old friends, yet their playing always retains that sense of gracious etiquette associated with the noble classical academies for which the core of their music was intended. Nothing is forced or exaggerated or overly mannered in their playing. Tempos, ensemble and balance – all seem effortlessly and intuitively right. The string sound is lucid and the cellists take turns adding warmth to the continuo. 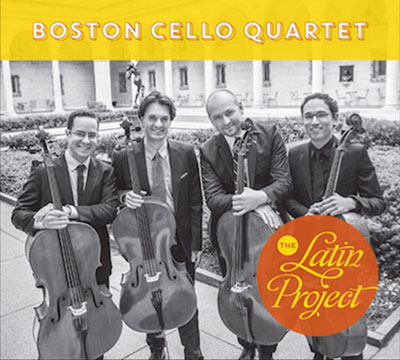 On this remarkable second recorded performance – The Latin Project – these qualities are highlighted in the diverse fare which is, in sum, sincere and poised accounts, fitting tributes to the chaste and faultless character of the composers and their music. So what is the most challenging repertoire for any artist to commit to disc? Bach’s Cello Quartets, Beethoven’s Violin Concerto, Mozart’s piano sonatas? No, it surely is the bon-bon record, which is essentially what its title – The Latin Project – suggests. Such a name could, in other hands, have seemed pretentious, or worse – cheesy, but not here, for these four cellists take us on a journey through life in the Latin world and Brasil that celebrates their 5-year musical friendship Where else to begin than with Piazzolla, via a tango whose vivid transformation into a cellist’s dream launches into everything from Chabrier and Albéniz and Barroso?

Highlights are many, and they skirt the dangers of slow-miniature overload deftly La Boda de Luis Alonso, Preludio followed by Chick Corea’s Spain is a hotspot, but such is the directness of the cellist’s tone, confiding, but never sentimental, that it makes a telling combination especially as the Granados is followed by Ary Barroso’s iconic Brasil. And while that is a fitting end to a magnificent disc, the full impact of the repertoire is sustained throughout, study after study and piece after piece. It’s not all slow and ethereal, though: the first part of Patrice Sciortino’s Imer-Amer, Trois Danses D’Amerique Latine – Tan.go.tan has real zest, while the rest of the suite, with its arching cello lines that soar above repeated note ensemble backdrop is warmly evocative.

Even a chart as hackneyed as Barroso’s Brasil comes up sounding fresh; such is the imagination of the four artists. Another inspired touch is the inclusion of a movement from Catbrier’s España, which is mesmerising in the Quartet’s hands. By the end of the performance you realise that the title of this disc is utterly apt: this is a meditation on Latin life, not a bag of pick-and-mix. The recording is wonderfully immediate, as is the conversations between the artists in their telepathic performance. Sparks fly and a special warmth ensues as the music burns with the bluest part of a flame, which is not unusual, coming from four excellent musicians that make up this iconic quartet.