The renowned British cellist, Natalie Clein once said: “I am a great believer in music that takes time to unfold.” She was, of course, speaking of composition, but she could very well also be describing the process of maturation. And while there is no fixed time for discovery and/or development clearly, for some the milestones come very early and the whole process of progress often proceeds at the speed of light. This might certainly be the case for Miss Lim. 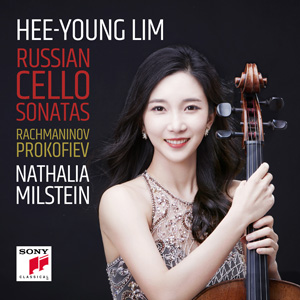 Listening to her second Sony Classical disc, a duo performance with pianist Nathalia Milstein; of Russian Cello Sonatas – Rachmaninov and Prokofiev I had a feeling of almost light-headed wonderment. How brave, I thought, for someone so young to attempt such difficult, late work by these two Great Russian composers. I understood that her unique genius might enable her to play these works, of course, but to be able to rise to the challenge of attempting such diabolically demanding music – and that too, in the case of the Prokofiev, at least – written for a famously uneven partnership between piano and cello… this was something almost unbelievable.

I couldn’t resist the question, so I asked her: “What made you think of these two works?” She thought for a brief moment and then replied calmly: “I knew it would be challenging. But I wanted to see how well I could approach works where the cello had so few notes to play… to see if I could still play those few notes given to me in a way that was meaningful.” Listening to the recording for a second time, after talking to her, I realise that the simplicity of her statement actually reveals the depth of thought of this young genius.

And not simply thought, or word, but deed, too: Miss Lim has used her art and craft as a cellist in a way that you might expect from Rachmaninov and Prokofiev – going for broke; going for beauty of tone and articulation and thinking of bowing and vibrato and all the fine qualities of this beautiful instrument. While I know that she has not, in fact, written these notes that she is playing, they are certainly speaking to her in a very special way. I hear all of the despair and hopes, the sorrows and joys of Rachmaninov and Prokofiev at the height of the Soviet-era ideological madness of Andrei Zhdnov’s “formalism”. I hear – especially in the Prokofiev – how the composer escaped from the terrors of being crushed by ignorance through the inextinguishable triumph of music.

“Is it possible,” I ask myself, “that someone so young and so far removed from that frightful and dangerous time, could understand and feel this music so empathetically and with such profundity?” The answer is not simple, but suffice it to say that in a child-like manner geniuses are often able to penetrate complex mysteries. They have inner ears and voices with which they listen and sing. This is what I am witnessing as I listen to Miss Lim’s Russian Cello Sonatas: music that is reborn through her.