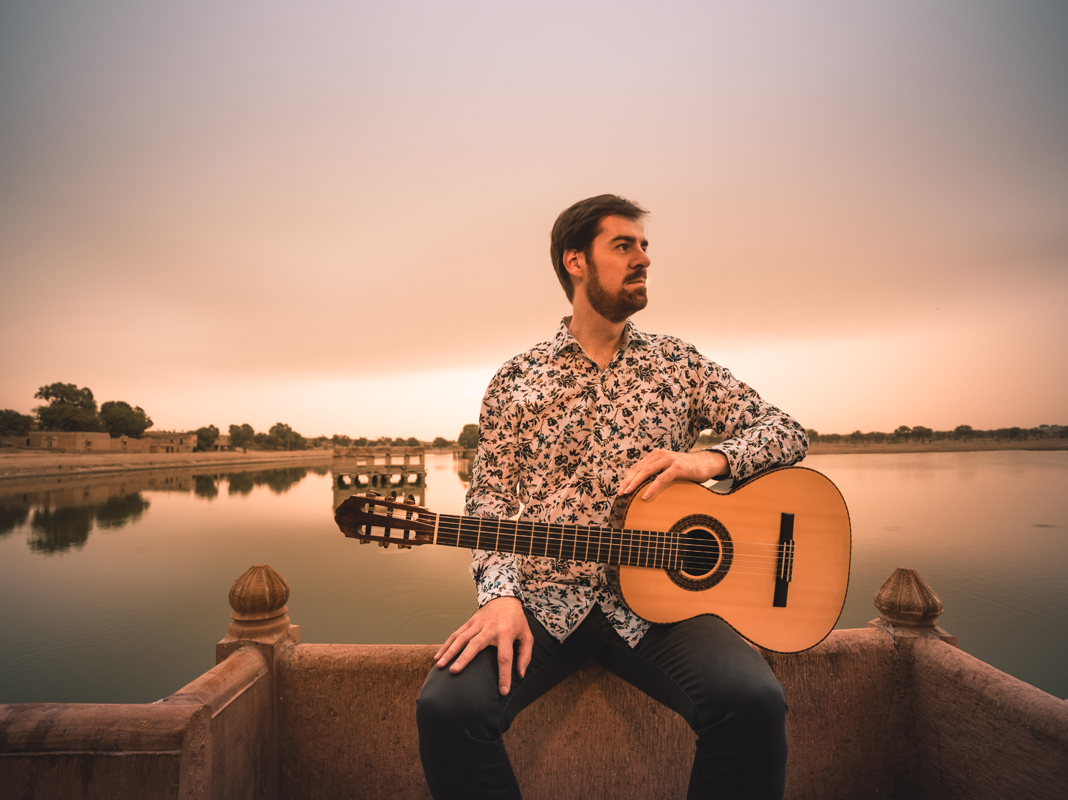 A preview of Simon Thacker’s World Premiere of Pashyanti on Guitar features special guest dancer Aishwarya Raut. I cannot think of a guitarist of our time who has done more to push the guitar [and the music for the guitar] beyond the limits for which the instrument has been designed to a greater degree than Simon Thacker. To be correct, of course Larry Coryell did some of that heavy lifting when he recorded Igor Stravinsky’s Le Sacre du Printemps [Philips, 1983] and I watched him as he performed that work on stage too. And then there is also Sharon Isbin, who recently released her world premiere of Strings for Peace, a ground-breaking collision of guitar and sarod performed by Miss Isbin and Amjad Ali Khan [ZOHO Records, 2020].

However, to listen to and – in this case – to watch Mr Thacker create a series of works for classical guitar, based on and incorporating Sanskrit shlokas; to infuse particular Sanskrit epithet with new meaning and to create works incorporating the age-old traditions of ancient India and its Hindustani music is altogether new. And to make the music and the narratives embodied in the works so much more evocative by incorporating a hybrid of tradition and improvised dance featuring a remarkable young dancer Aishwariya Raut speaks to Mr Thacker’s unique genius.

The four separate works were created for live performance at the Edinburgh Fringe Festival, as part of Made in Scotland, at Summerhall. This follows Mr Thacker’s mighty works captured on an album entitled Simon Thacker’s Svara-Kanti, an excursion in which he fused his classical musical roots into Hindustani [Northern Indian], Carnatic [Southern Indian] music together – most magically so – with the mystical music of the Bauls of Bengal [and Bangladesh]. With the release of that music Mr Thacker served notice not only of his genius, but that he had effectively blurred the boundaries [both technical and otherwise] that separate the music of the world. And now, there is Pasyanti on Guitar – the word Pasyanti means “the ordinary waking states and pure consciousness.”

With Pashyanti on Guitar Mr Thacker seems to have advanced his own cause to push his own creativity into that realm, and in fashioning a new music and dance with a seemingly invisible muse, done so with the brilliant dancer Aishwarya Raut standing in for whomever that muse is. Perhaps Miss Raut is that muse. This certainly seems so from the half hour film that has been shot at a castle and a quarry in the Highlands, as well as in a forest – all of this in Mr Thacker’s native Scotland. The film is the work of cinematographers Ruth Barrie [who also acts as editor] and Glenda Rowe; the sets are designed and lit by Sam Jones with Fraser Martin as his assistant; and the sound recording is by Mr Thacker himself.

The film is a work of art in itself – largely due to the team involved in making it. The lighting is ethereal and quite magnificent by any standards. [Expect nothing less from Scotsmen and women]. Of course, the magic is in the music and dance, all of which is introduced by Mr Thacker and Miss Raut. Through it all you will be left breathless, of course. But you may also be amazed by the depth of Mr Thacker’s immersion into the world of ancient India; his grasp of its ancient language – Sanskrit – and how Mr Thacker bends it and Indian culture seemingly to his Scottish will. I have, in the past, referred to Mr Thacker as a “musical alchemist”. Listening to this music will tell you why I firmly believe so.

But there is now something else: this is an audio-visual experience that you are likely to be haunted by for a very long time to come. This is because of Miss Raut’s interpretation of Mr Thacker’s music. Her improvised dance captures with great depth of feeling in her balletic movements the music’s emotions in all its tempestuousness, grace and fire. All of this adds to an experience that is quite breathtaking. And it will most certainly also seduce you into Mr Thacker’s world of art ornately adorned, and which is born of curvilinear shapes and a myriad of colours that bring to life narratives and emotions that you may never have experienced before – all of which is ensconced in musical architecture that brings to life things ancient, mystical and magical all over again. It’s all in the work of a musical alchemist after all.

Pashyanti on Guitar was premiered at the Edinburgh Festival Fringe and is available in digital form on demand player platform, until 29 August. Tickets are available here.