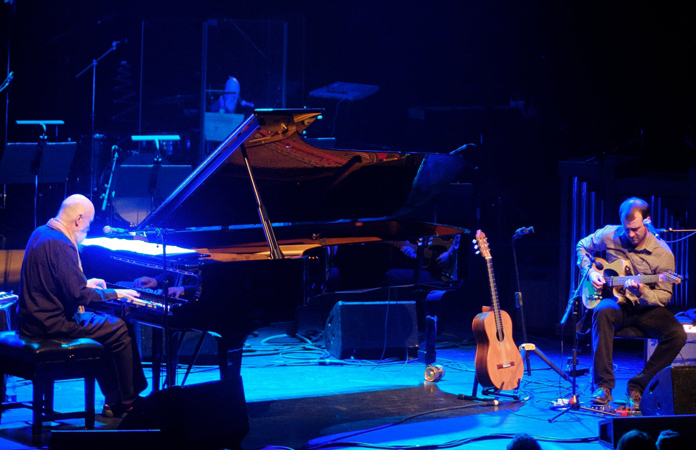 In the dying cinders of “The Afterglow”, that work’s final movement with which Mr Silverman ended his part in the proceedings he also introduced us to the protagonists of the main event: the eminent Terry Riley, accompanied as he is often today, by his son and virtuoso electric guitarist Gyan Riley. In programme notes Mr Riley describes the experience of composing and playing with his son: “Nothing I have done in this life has given me more satisfaction than improvising on these songs with Gyan.” And we were to have a delectable taste of some music from one of Mr Riley’s greatest works Salome Dances for Peace, which had one of its most celebrated performances with the legendary Kronos Quartet. That recording was then made on August 1988 at Skywalker Ranch in Nicasio, California and featured violinists David Harrington and John Sherba, violist Hank Dutt and the inimitable cellist Joan Jeanrenaud; then combining to form the original incarnation of the Kronos Quartet.

Mr Riley’s monumental work is probably one of the finest string quartets composed in the last half of the 20th century. Those who are only familiar with Riley’s employment of mesmeric, trance-like Hindustani drones to inflect his ingenious minimalist pianism (and electronic keyboards) were still in for a few surprises in the performance of these excerpts, played in duet with the younger, guitar-playing Riley. Breaking from pure minimalism on this piece the venerable Mr Riley clearly turned to other influences for inspiration. Much of Salome Dances for Peace is inspired by folk dance music as well as Indian kirtans and ragas. Bartok’s intense driving Hungarian dances were also referenced, as well as American William Grant Still’s rhythmic rustic blues-influenced string compositions. And in the gigantic crashing finale of “The Bull” we might have felt the heft of Mussorgsky too.

But at eighty-five years, Mr Riley had no need to organise his music after any European model. He had long since been at some distance away from his peers in the Minimalist movement that grew to eminence in the early 20th century. Men John Adams, Philip Glass and Steve Reich; even Giuseppe Chiari, who was once a master but never became a cultural icon; and his (Mr Riley’s) friend La Monte Young. The latter had befriended Ornette Coleman and Eric Dolphy while Mr Riley, following his spiritualist path found John Coltrane and – most importantly – his ultimate guru Pandit Pran Nath, an Indian classical singer and teacher of the Kirana gharana (singing style) much attracted to mysticism and like his own guru Abdul Wahid Khan, a Muslim, to Sufism as well. 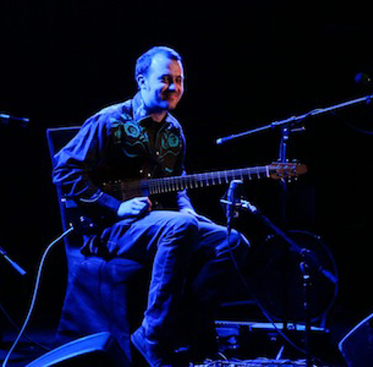 For Mr Riley, notation has never been just about reading. He expected his musicians to internalise his melodic modules to the extent that they could not only hear, but feel them. Mr Riley’s 1964 classic In C is a classic example. Here musicians took ownership from the composer building from their sensitive ensemble-listening as a network of overlapping conversations and triggering questions and answers. No one musician was ever allowed to dominate the floor to press their point of view too assertively. And everything we saw and heard on the night of January the 18th, 2018 between father and son was much the same. The music did flow from Mr Riley’s point of departure; his realisation that Indian music tempered by ‘Trane’s modally anchored Jazz, as stylistically distinct as they were, shared one common characteristic: cosmic rhythmic energy flowing over relatively static harmony.

Thus the element of drones – or droning – and Mr Riley made masterful work of it both with his mighty arpeggios, mincing dyads, gliding triads, and other leaps of right hand complemented by a thundering left hand augmented every once and a while with the reverence of a ululating melody, sung in a voice that echoed like and was evocative of the rustle of raw silk swishing in the air crushed by a dancer’s twirling and swirling movements. His mighty alaap that set up the final melody and miniature evocation of a raga was one of the highlights of the night.

Before that, of course, we heard the pulsating shimmer of Mr Riley’s “Mongolian Winds” and one of Gyan Riley’s own compositions, which was introduced simply as “Folk Song”. By instinct the younger Riley showed himself to be a distiller and simplifier – a minimalist who played perfect foil to the proto-minimalism of Terry Riley, who held court at Koerner Hall; a monarch of the enduring style all his own which has had no peer in all the decades since he created a fabled music. And in the grand finale both were joined on stage by Mr Silverman, who returned to the stage for a final jam, bringing with him the wailing expressivity of Jimi Hendrix on the violin to join in the drones, the leisurely repetitions and the shamanistic intensity of colliding patterns to bring to a close the phenomenal experience that was the raw and exhilarating trippiness of the music of one of the great composers of our era: Terry Riley…Namaste.