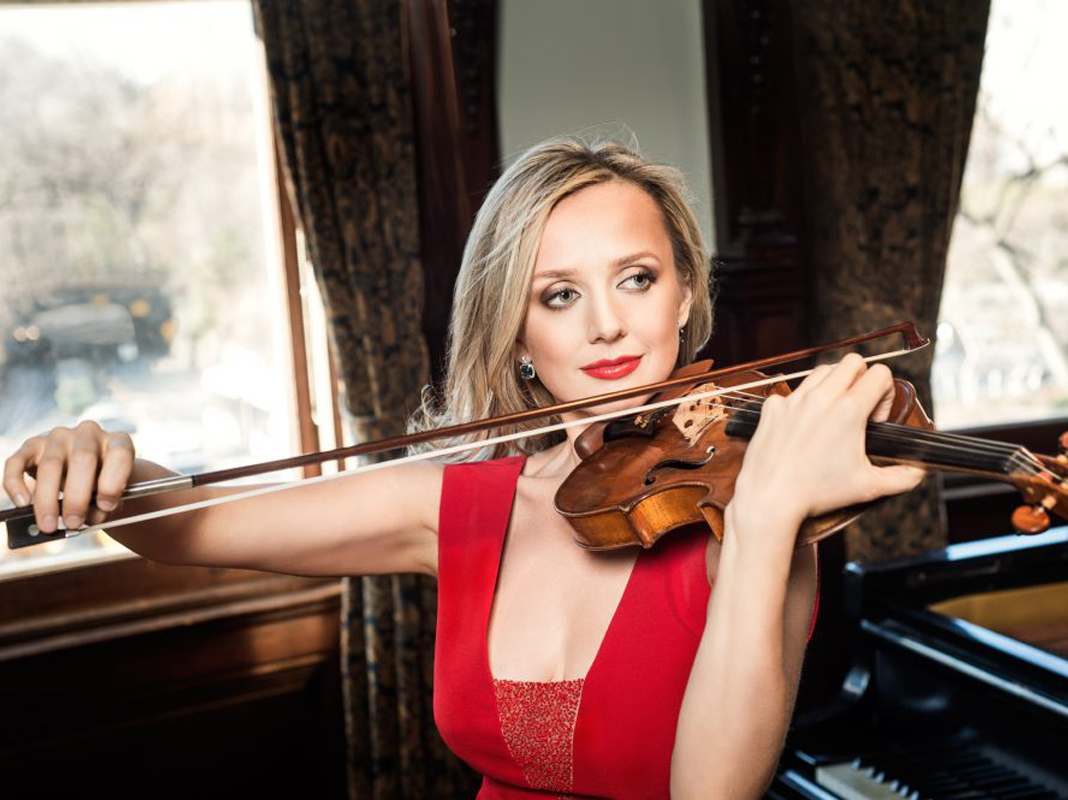 In an ideal world we would have no cause to refer to Solomiya Ivakhiv as a “Ukrainian” violinist and pedagogue, which she is. But she is first “an artist” of the first order with a certain genius for performance that translates the romance of music into something that fills your heart and your spirit to overflowing. Indeed, however, we live in extraordinary times, and Miss Ivakhiv is proud of her heritage as her music on Ukraine: Journey to Freedom indicates.

However, today this music has so much more urgency to it because of Russian President Vladimir Putin’s murderous – perhaps even genocidal – invasion of that sovereign country. And thus listening to this music fills one with existential sadness – even dread – for Ukrainian people. Prophetically, Miss Ivakhiv’s violin wails out for injustice; cries for freedom along with the National Orchestra of Ukraine, as it does too in an earlier recording, so portentously entitled Ukraine – Journey to Freedom, in a series of ephemeral duets with the pianist Angelina Gadeliya.

But Miss Ivakhiv is first an artist of inflammable brilliance. She doesn’t simply play music; she ignites it, as the two discs under consideration indicate. True, they are worlds apart. One glorifies music in the modern Ukrainian tradition, and the other dives into music of poetry and rhapsody. No matter what you may choose to listen to, though, Miss Ivakhiv’s playing will grow on you in the manner not unlike John Keats’ lyricism in Endymion – a poem that follows the wanderings of its eponymous shepherd-hero, whose love for the moon goddess Cynthia takes him through sylvan dreamscapes, underground chambers, and the ocean’s “hollow vast.” Thus Miss Ivakhiv’s music is like the Keats’ poetic adventure:

“A thing of beauty is joy forever
its loveliness increases; it will never
pass into nothingness; but will keep
a bower quiet for us, and a sleep
full of sweet dreams, and health, and quiet breathing.”

There is also the breadth of Miss Ivakhiv’s artistry that traverses the vast musical topography of Europe. In her most recent [February 2022] disc, Poems and Rhapsodies Miss Ivakhiv – together with the National Symphony Orchestra of Ukraine, the cellist Sophie Chao on Camille Saint-Saëns’ “La Muse et le poète Op. 132 – she brings to the music a bristling virtuosity, which raises the music [that she plays] to the divine. Of course the repertoire lends itself eloquence, but such eloquence as Miss Ivakhiv displays is uncommon.

Solomiya Ivakhiv: Poems and Rhapsodies Indeed Miss Ivakhiv’s performance throughout has the heat to make your blood run faster. I don’t mean heat of hard-driven percussive kind [that you may experience on Muzýka – Musician by Ivan Karabits [from the disc entitled Ukraine: The Journey to Freedom that is reviewed later in this feature]. On the contrary, on the six pieces in Poems and Rhapsodies, the flowing line is always respected, tempos most certainly vary and are up with the pace of the work being played. But her instrument [and the cello and the instruments of the orchestra] always speaks with great warmth and humanity.

Miss Ivakhiv is particularly sublime in Saint-Saëns’ “La Muse et le poète Op. 132” – and more especially in Ralph Vaughan William’s incredible work “The Lark Ascending” that describes the flight of the bird after George Meredith’s poem. Here there is plenty of detail, but it is natural and never fussy. Moreover, on both Kenneth Fuch’s “American Rhapsody” as well as Myroslav Skoryk’s brilliant “Carpathian Rhapsody”, the ornamentation grand, and always clever, sometimes humourous, often delightful. Add to that the technical excellence throughout the programme; the exactness with which violin and Miss Chao’s cello articulate their semiquaver groups in “La Muse et le poète Op. 132”, or the cutting precision of her violin alone on the scurrying cadenza in Fuch’s “American Rhapsody” – and a recorded balance that hits the perfect combination of blend and clarity, and you have the ingredients of something truly memorable.

What really shoots this recording up the pile, however, is the sheer joy of it, the spontaneity and the tireless surging musical energy of its sudden feints and sullies. How grippingly, for instance, the tension climbs in the otherwise polite music of Ernest Chausson’s “Poème symphonique”; how liltingly and off beat the music of “The Lark Ascending” by Vaughan Williams takes wing in the rarefied air of the listening room. And finally how invigoratingly the taught energy of Myroslav Storyk’s “Carpathian Rhapsody” builds from the glorious chain of suspensions at its beginning to the witty interplay of violin and orchestra as the rhapsody spills over into the final-note twiddle that is pure exuberance.

Solomiya Ivakhiv | Angelina Gadeliya: Ukraine – Journey to Freedom Before any assumption can be made regarding its title Virko Baley’s proclaims in his wonderfully historic and descriptive notes that the ‘Freedom’ of the title refers to setting free of Ukrainian artistry years of proscription and control Soviet era. Moreover, and this is particularly revealing, Ukraine was not officially recognised as a fully independent state until August 24, 1991. The feeling of ‘freedom’ thereafter must be regarded as having an immense impact on composers and music from the perspective of exercising complete independence of expression; to be who they really were and not whom it was convenient to be as composers.

To call Solomiya Ivakhiv’s and Angelina Gadeliya’s interpretation of these wonderful compositions heavy-laden would certainly be no exaggeration. But there is also a wonderful unreservedness to the recital as pianist and violinist abandon themselves to the spirit of the music. So spaciousness is not the most surprising aspect of the performance – after all, it would seem that few musicians would take the allegro molto moderato marking in the music face value without infusing it with the ghostly whispering of echoes and silences that characterise these fine works. Allied to the undoubted pianistic and violin mastery of Gadeliya and Ivakhiv, such unorthodoxy certainly commands attention, although none of this suggests attention-seeking at all.

The interdependence of piano and violin produces scintillating performances throughout. This is instrumental in bringing out the lyric nature of the works here and is heard to especially mesmerising effect in Viktor Kosenko’s ‘Two Pieces Op.4’. You feel part of the idiom deriving from the uniquely Ukrainian feeling of release from cultural imprisonment into a heady mix of alternating violence and tenderness, innocence and seduction. Mood-swings are extreme, telling you that many Ukrainians might admit that their temperament can reel from sadness (an inimitably ‘blue’ tint) to a dignified exuberance, with little in between. And even when someone like Skoryk or Kryvopust or any other of the composers whose work is performed here give you pieces with a somewhat close cultural likeness to another, you listen with a sense of renewal thanks to the performances of Ivakhiv and Gadeliya.

Both violinist and pianist have technique in spades and are blessed with expression of a superb sensitivity and zest, and imaginative scope, making them simply splendid together. Both are lucid and focused in the swirling patterns of the music, making you think of nougat and caramel being poured into chocolate. Such is the delectability and sensuality of each performance. The recorded sound of this disc is also outstanding but no praise could be high enough for the performances of Solomiya Ivakhiv and Angelina Gadeliya.

Today [the 22nd of March, 2022] then is as good a day as any to be listening deeply to these grand discs featuring Solomiya Ivakhiv among others – including the National Symphony of Ukraine conducted by Volodymyr Sirenko, and pianist Angelina Gadeliya. Yes, Antonio Vivaldi and – more so Nicolo Paganini – may have blazed an interstellar trail as two of the greatest violinists of any era. But the relatively nondescript four-stringed instrument [the direct descendent of Arabic rebab] has other great virtuoso as well, though not many who champion and perform modern repertoire quite like Solomiya Ivakhiv, as we may experience on these two discs, which are both equally to die for.

The review of Solomiya Ivakhiv | Angelina Gadeliya: Ukraine – Journey to Freedom was first published in JazzdaGama on the 2nd of May 2016. This reprint is intended to remember – and to pay tribute to – my dearest friend, the late, great musician, producer and polymath Heiner Stadler. Not many people know that – like what is happening to the Ukrainian diaspora thanks to the genocidal Vladimir Putin – Mr Stadler’s family was among those displaced from their homeland by the gathering storm of Nazism, in the 1930’s. A feature I wrote on to celebrate his artistry is here.

The prismatic sound of Hee-Young Lim