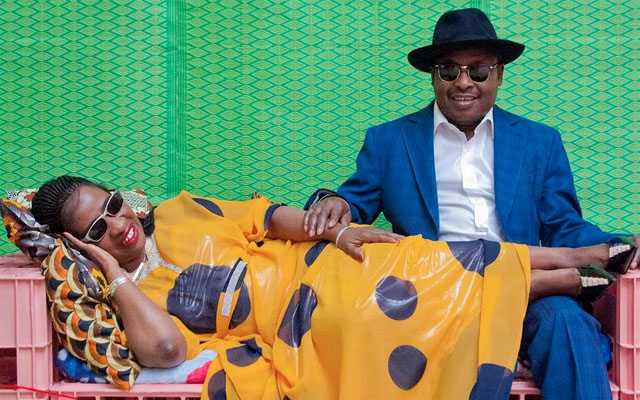 After achieving worldwide success with the song Dimanche à Bamako, Amadou & Mariam are back in Montréal to present their new album. Bofou Safou, the lead title, evokes the nickname given to “anyone who is holding a baobab and who likes dancing better than working.” And why not? Especially since the Afro-disco beats from this famous Malian couple, who have appeared on the world’s greatest stages for nearly 40 years, are irresistible for anyone with fun-loving hips. Not to be missed!

Amadou & Mariam are names that have become familiar even to people with only a limited knowledge of world music. Behind their worldwide success and the songs that skilfully blend tradition and modernity, Afrobeat, pop, rock and even electronic music, there has been a long journey and an extraordinary love story, along with perseverance and enormous passion.

Mariam Doumbia, born in Bamako, developed a remarkable talent as a singer at a very early age, memorizing songs from Malian and French stars she heard on the radio and singing at community events. At Bamako’s Institute for Blind Youth, this young lady, who lost her right at age five, taught song and dance to other pupils. Amadou Bagayoko also grew up in the Malian capital. As a child, he learned percussions, harmonica and flute before discovering his favourite instrument, the guitar. He also went blind, in his teenage years, though this did not stop him from taking part in various musical groups, including the Ambassadeurs du Motel, with which he achieved success and travelled abroad. At age 21, he entered the Institute for Blind Youth, where he met Mariam. Sparks flew between them, and it was the start of a great duo venture.

With the Institute, they took part in musical shows and organized awareness campaigns on the lives of blind people. In 1980, the year of their wedding, Amadou & Mariam gave their first concert as a duet at the Bobo Dioulasso stadium, in Burkina Faso. In 1981, Amadou became the head of Miriya, a group consisting of blind musicians. In the years that followed, Amadou and Mariam became increasingly well known in Mali. In 1986, they left for Côte d’Ivoire and, in the course of a few years, produced many cassettes that achieved huge success. As their fame grew across Africa, they gave a growing number of concerts.

In 1997, they recorded in France their first CD, Sou Ni Tilé (Night and Day), released the year after. The song “Mon amour, ma chérie” spread like wildfire. More CDs soon followed: Se Te Djon Ye the same year, then Tje Ni Mousso (Man and Woman) in 1999 and Wati (Time) in 2002. They began appearing at major international festivals: the Eurockéennes, Los Angeles, Montreux…. Their talent seduced French musician Manu Chao, and an album emerged from their collaboration: Dimanche à Bamako (Sunday in Bamako), which won the award for best world album at the Victoires de la musique in 2005.

Several albums later, Amadou & Mariam remain at the top of their game, participating in prestigious events such as the awarding of the Nobel Peace Prize to Barack Obama and the opening of the football World Cup in South Africa. Politically committed and always keen on solidarity, they are sought all over the world. Recently, they even appeared in a Québec film, Le cœur de Madame Sabali, by Ryan McKenna. In 2012, they recorded the energetic and captivating album Folila in Paris, New York and Bamako, bringing together artists from all backgrounds whom they have encountered during their career. This year, the anticipation surrounding the release of their new EP, La Confusion, confirms that Amadou & Mariam remain true masters!