World Music and Dance [WOMAD], the UK’s top global music+dance festival is back this year at Charlton Park from July 28th to 31st. Audiences can expect an amazing line-up at this year’s festival which celebrates 40 years of WOMAD.

The wonderful world of WOMAD embraces not only the superstars of the global music scene but also an eclectic range of rising starts such as Olcay Bayir, Vision Collective, Dudu Tassa and the Kuwaitis and London based 7-piece female mariachi band, Mariachi Las Adelitas.

Mariachi Las Adelitas are delighted to be performing at this year’s WOMAD UK 2022 which was made possible thanks to DJ Ritu from A World In London and Angie Lemon PR. Hailing from Mexico, Cuba, Colombia, Italy and the U.K, Mariachi Las Adelitas is Europe’s first all-female mariachi band and was formed in 2013 out of the desire to shatter stereotypes within the genre.

Each member of Mariachi Las Adelitas is a professional instrumentalist, with no less than three lead vocalists in the group. Mariachi classics are included in their repertoire, with original compositions and some beautiful arrangements of classics in English arranged in authentic mariachi style, making them truly versatile.

More information about WOMAD UK 2022 may be found here. 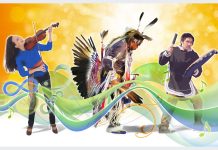