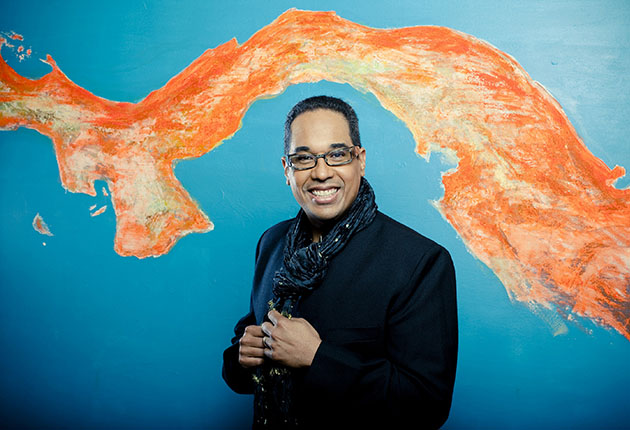 “This piece is based on my concept called three-dimensional music that combines jazz, Pan-American folklore, and classical music. It has melodic references to traditional Panamanian folklore mixed with North American blues and improvisations, fused with harmonic language from my background in classical music and jazz.” – Danilo Pérez –

On Saturday, May 4, 2013, at 8:00 pm, acclaimed Panamanian pianist, composer, Danilo Pérez brings to Koerner Hall his trio, featuring John Patitucci on bass and Brian Blade on drums. It will be the final concert of Koerner’s Hall TD Jazz Series: Devoted to Dizzy concert season at The Royal Conservatory in Toronto. Mr. Pérez and his trio will pay tribute to the great late jazz master Dizzy Gillespie. However, the highlight of the evening will be the world premiere of Camino de Cruces, performed by Danilo Pérez with one of Canada’s most celebrated young string quartets, the Cecilia String Quartet. Commissioned by The Banff Centre, Camino de Cruces will be a real treat for jazz and classical/chamber music lovers. This is a new piano quintet piece written by a master jazz artist, Danilo Pérez, for the grand prize winner of the 2010 Banff International String Quartet Competition, the Cecilia String Quartet.

In Pérez’s own words, “Panama first made an impact on modern world history in 1513 when Spanish explorer Vasco Núñez de Balboa crossed the Isthmus of Panama and discovered the Pacific Ocean. The Camino de Cruces Trail, which unites the Atlantic and the Pacific Oceans, is possibly one of the most important trails in Panama, as it was the site of many historical journeys.”

On the meaning of the new piece, Pérez explains: “Camino de Cruces tries to create a personal journey that captures the different challenges the Spaniards, native Indians, and slaves may have faced during their journey from the Atlantic to the Pacific during colonization. This piece is based on my concept called three-dimensional music that combines jazz, Pan-American folklore, and classical music. It has melodic references to traditional Panamanian folklore mixed with North American blues and improvisations, fused with harmonic language from my background in classical music and jazz. The main meter is written in 6/8, but felt in 2/3. At the base of the piece is folkloric counterpoint: native Indian, African, and European cultures blending their influences to create a hybrid form in order to represent Panama as a melting pot.”

A very interesting feature of this performance is well explained by Conrad Sweatman on a posting he wrote for The Banff Centre blog back in December 2012: “Pérez’s commissioned work draws upon the harmonic language of modern classical music, while it explores the rhythms of world folk and jazz music.” “… Pérez will join the quartet to perform his piece, and the quartet and the composer will improvise during selected passages. Improvisation is rare in the repertoire of chamber music, and lends a fresh dimension to these works. “Although cross-genre can be difficult to pull off, the improvisation aspect definitely attracted us,” says Caitlyn Boyle, violist in the Cecilia Quartet. “We have been predominantly classical focused, so we are very excited for the chance to work so closely with a jazz artist like Danilo.”

Camino de Cruces is a three-movement piece. The composer provides some insight on each movement.

“During the first movement, Spaniards start their journey into the new land (now called Darién). It is difficult to walk into the jungle and it is a struggle for all, but the sound of the strings is orchestrated in such a way that one can perceive the sunlight after the struggle through the Camino de Cruces. The violin and the cello are talking to each other in 6/8 and 5/8 meter, which shifts to 3/4 and 4/4. It is based on a lot of counterpoint, what I called “horizontal writing.” This creates interesting harmonies such as blues riffs against sonority of fourth, triadic chords, twelve-tone harmonies with jazz, and rhythm phrases that are juxtaposed against Panamanian rhythms and melodies. The strings are also challenged by using different sounds, imitating native Indians with pizzicatos, improvising, and using the string instruments as percussion instruments.

In the second movement, Indian flutes are heard through the pizzicato strings as the premonitions of the approach of the shamans. Many Indians are anxious.

The last movement foreshadows the final part of the Camino de Cruces, also predicting the discovery of the New World after Vasco Núñez reaches the Pacific Ocean. All sides succumb to history and the Indians move forward very cautiously, as they have seen a change already and predict what is coming. They are aware they have to forget, but never forgive. Camino de Cruces is a celebration of those indigenous people who helped Vasco Núñez to find his way.”

Buy your tickets online at: https://tickets.rcmusic.ca/public/hall.asp?event=735 Grammy Award winner Danilo Pérez has established himself as one of the most preeminent musicians of his generation and his distinctive blend of Pan-American jazz has attracted critical acclaim and loyal audiences all over the world. He started his musical studies at just three years of age with his father. By the age of 10, he was studying the European classical piano repertoire at the National Conservatory in Panama and, at 12, he started working as a professional musician. Since the late 1980s, he has toured and/or recorded with many jazz masters, and has been part of the Wayne Shorter Quartet for 12 years.

Mr. Pérez first attracted the spotlight as the youngest member of Dizzy Gillespie’s United Nation Orchestra in 1989. Since 1993, he has been recording with his own group, earning many awards, including the Grammy Awards and Jazz Journalists Association. He is also a prolific composer and has been commissioned by Carnegie Hall, Lincoln Center, and Chicago Jazz Festival, just to name a few.

Mr. Pérez has also received numerous awards for his social work in Panama, including the Orden Vasco Nuñez de Balboa, Key to the City of Panama, Smithsonian Legacy Award, ASICOM Award, The Most Influential Latinos of the Delaware Valley, and, in 2012, he was named Unesco Artist for Peace.

Currently, he directs the Berklee Global Jazz Institute located in Boston where he developed an innovative educational curriculum. He also presides the Danilo Pérez Foundation, which provides outreach music programs to underprivileged children in Panama, and serves as the Artistic Director for the Panama Jazz Festival. Taking their name from St. Cecilia, the patron saint of music, the Cecilia String Quartet continues to win praise following their 2010 First Prize at the Banff International String Quartet Competition.

The CSQ is currently in residence at the University of Toronto Faculty of Music, a position that has been made possible by a generous gift from BMO Financial Group and, until recently, they were Quartet Fellows at The Glenn Gould School of The Royal Conservatory. They have presented educational programs for elementary and high schools across Canada, the USA, Italy, and France. In 2009, they created BLiM (Breathing Life into Music), a month-long residency in France and in 2010 collaborated with the Afiara String Quartet in premiering and recording compositions by eight composers of the Common Sense Composers Collective at the Banff Centre.

Min-Jeong Koh plays on the ca. 1767 Joannes Baptista Guadagnini violin and Sarah Nematallah plays on the 1851 Jean Baptiste Vuillaume violin, both on loan from anonymous donors. Rachel Desoer recently won the use of the 1929 Carlo Giuseppe Oddone cello from the Canada Council for the Arts.

Mr. Pérez made his Royal Conservatory debut on March 27, 2010, during Koerner Hall’s inaugural season, and the Cecilia String Quartet made its Koerner Hall debut on May 15, 2012.