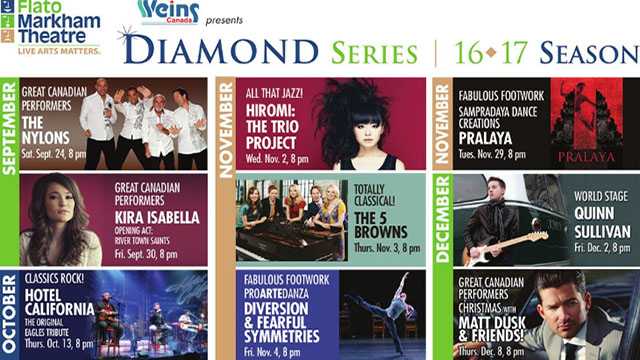 The 16-17 Diamond Series program features 49 productions and 65 performances. Multiple artists will make their Markham debut this season. Direct from China, the unbelievable Shanghai Acrobats perform Shanghai Nights, a jaw-dropping production full of gravity-defying tricks and contortions that will leave you speechless.  Sibling piano sensation The 5 Browns play classical like you’ve never heard it before, with five grand pianos on stage at the same time! A spectacle of Brazilian rhythm and movement, dance troupe Balé Folclórico da Bahia will pulsate through the Theatre with their colourful mixture of samba, capoeira and reggae beats. The Mike Stern Band will impress with their smooth guitar licks; and get ready to rock with Jeans ‘n’ Classics, a performance group with a full orchestra and vocalists singing the best of Earth, Wind, & Fire, and The King of Pop. Through a fusion of Chinese martial arts, acrobatics, and an all female percussion ensemble, Immortal Chi, directed by celebrity creator Erik Villeneuve, tells the story of a Tai Chi master and his ultimate challenge to regain his inner energy and life force.

Dance takes centre stage as the beautiful Russian National Ballet Theatre perform Tchaikovsky’s famous Swan Lake; the steamy Broadway smash, Luis Bravo’s Forever Tango will heat things up with its fiery choreography. A Tony-nominated production for “Best Choreography”, Forever Tango makes its first appearance in Markham with this performance. Modern ballet company ProArteDanza will present the World Premiere of their show Diversion & Fearful Symmetries, and internationally renowned Shanghai Dance Theatre will make their Canadian debut with a five-day artist residency with their show Fragrance. The residency will include education and outreach activities as well as two full performances.

The Theatre has programmed four Breakthrough Artists causing a buzz in the music scene. Teenage blues guitarist Quinn Sullivan has shared the stage with legends like Eric Clapton and BB King, and is a protégé and friend of the great Buddy Guy. Country rising star Kira Isabella’s earthy vocals and blend of rock and country have captured the hearts of music fans; Scott Helman’s hit song Bungalow was certified gold as a digital download and helped him receive a JUNO nomination in 2015 for “Breakthrough Artist of the Year” and “Pop Album of the Year”. All between the ages of five and 14, the members of Next Generation Leahy are pros at the fiddle, cello, voice, French accordion, piano, and French Canadian step-dancing. Celebrate the tradition of the East Coast and revel in the spirit of Celtic music and dance!

To celebrate Canada’s 150th anniversary, the Theatre has expanded its popular Great Canadian Performers series to ten incredible shows, including The Nylons who will open the season with their Farewell Tour, and alternative rock group Sloan’s One Chord to Another 20th Anniversary Tour.

The Theatre is proud to continue its work to engage the community through education programs and outreach initiatives under the umbrella of Discovery. The Discovery program offers exciting and interactive school matinees, including performances for students as part of Every Child, Every Year (ECEY) – an initiative that offers every student enrolled in a Markham school from grade one to three the opportunity to attend a matinee at the Theatre each year free of charge. ECEY performances include Québecois theatrical clowning group L’Aubergine’s Terzettto, contemporary dance company Sursaut with The Cicada & the Ant, and Celtic musical group The Next Generation Leahy. The Theatre programs additional shows for students as part of its School Matinees program. Performances include abridged versions of Shanghai Nights, Swan Lake, and Immortal Chi.

Introducing StudentsLive! a new pricing structure that offers all students and children tickets for only $15. Students will have dozens of shows to choose from as the majority of performances scheduled next year include this incredible price. Dedicated to developing young minds through exposure to live arts, the Theatre is proud to offer this new ticket program.