“The world is ready for this,” says Tina Turner. “The world is feeling this depression. The first thing we think of is prayer, something beyond presidents and preachers.”

Turner lends her voice to Awakening Beyond, a project that embraces spiritual insights from around the world. Women from six different backgrounds and traditions–the US, Israel, Syria, Nepal, Switzerland, and India–raise their voices, finding that unitary resonance meant to lift us out of our everyday trials, toward something greater. “When we pray, we’re all sending it in the same direction,” Turner reflects. “I believe that that fusion can help change the world.”

The project has its roots in an early morning ritual nearly a decade ago, when Swiss vocalist and co-founder of the Beyond Foundation Regula Curti had a flash of enlightenment as the sun rose, an intense sense of presence, of the glory of being alive. She longed to share this moment with everyone she could. “I wanted to bring music to the world, to help other people have that same experience,” she recounts, “the experience of being fully alive, of having the strength to change something in their lives. To feel fully connected to the world, with love and with acceptance.” This longing inspired Curti to create a series of projects that used music and recitation to transformative ends. The first album was blessed by the Dalai Lama. 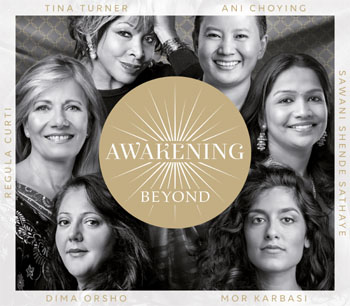 Awakening Beyond, the fourth album the Beyond Foundation has created, strives to spark this transformation by gathering women’s voices and supporting them with a lush orchestral score composed by Syrian-American composer Kareem Roustom, performed with exquisite feeling and precision by the Philharmonia London Orchestra. The palette is expanded by resonant traditional instruments from each region the vocalists represent, as well as thoughtfully employed electronics.

Yet the heart of the double album flows from the singers. Each vocalist brings something unique to Awakening, from an Arabic plea to God for rain in a time of desperate drought, a lullaby born in Spain but carried to Israel. The songs, poems, and prayers are deliberately chosen to reflect the healing and calming practices that vary yet harmonize across cultures. “The bigger picture was always to unite five important cultures,” explains Curti. “For several of the tracks, we focused on Asia and turned to [Nepali singer] Ani Choying’s healing voice. Of course, I knew we needed an Indian voice because of the healing quality of mantras and invited Sawani [Shende Sathaye], who learned mantras and songs from her grandmother.”

Many of the pieces are energetic and uplifting, yet the album’s conclusion, entwining the voices and languages into an expansive meditation, brings the listener into a place of contemplation and rest. The variety points to the many facets of music’s spiritual power. “Music can work wonders,” muses Sathaye. “It has meditative values and it can bring peace to those in trouble or in illness.”

The link between music, healing, and spiritual change is one Curti and Turner have been exploring for years. Curti, with her husband Beat, created the Beyond Foundation as a vehicle for promoting a more unified world, free from the dividing principles of culture, faith, and nation. This album is the latest in their ongoing efforts to increase dialogue, respect, and engagement via education and creative projects.

Turner feels equally strongly that it’s time for us to all move beyond the division, into greater spiritual connection and mutual recognition. She puts it in deeply personal terms: “I’ve had bad times, as we all have, though I hope it doesn’t show,” smiles Turner. “But now the good times are here and I’ve made the decision to go beyond and I would like to take as many people with me as possible.”

A Frequency of Her Own: Kiran Ahluwalia Synthesizes the Sonic World on 7 Billion