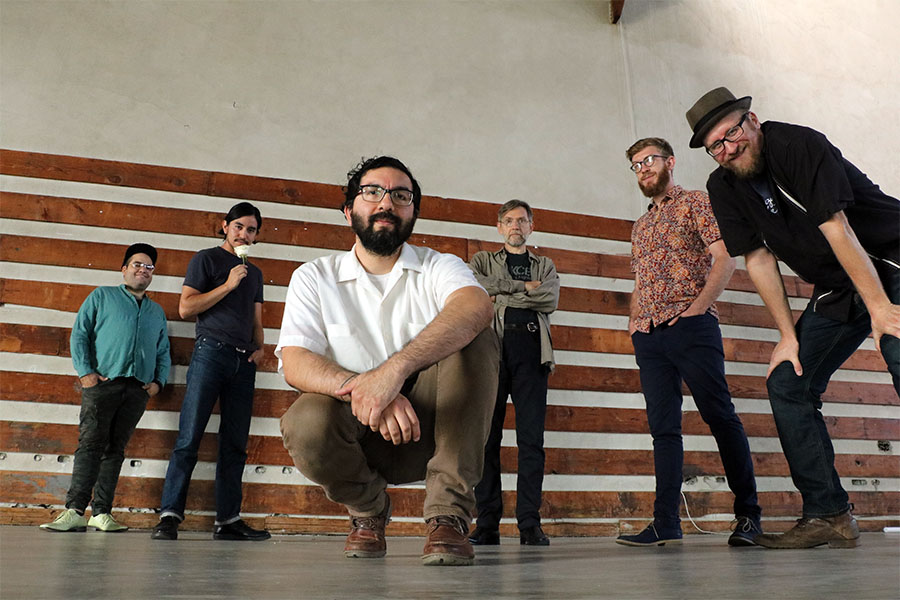 That sound comes of age with a literary panache to create an evocative tapestry of songs that transcend time and elicit lush imagery on Cuñao’s newest and second full-length concept album Rayuela (to be released April 10, 2020). Nearly four years in the making, Rayuela (which translates to Hopscotch) takes its inspiration from Argentine writer Julio Cortazar’s 1963 novel by the same name, a kind of choose-your-own-adventure story that could be read in different sequences of chapters to explore multiple endings and a never-ending search through unanswerable questions.

“The novel was our starting off point due to its loose and interesting use of form and chapter sequences,” reflects Julio Montero, the lead vocalist, guitarist, and founder of Cuñao. “Cuñao’s take on Rayuela is from our interweaving of different musical styles and rhythms, glued together through dreamy and introspective lyrical content dealing with death, love, doubt, and hope. These concepts make up the four parts of this album. Often, several themes, as well as musical styles, are explored within the same song.” 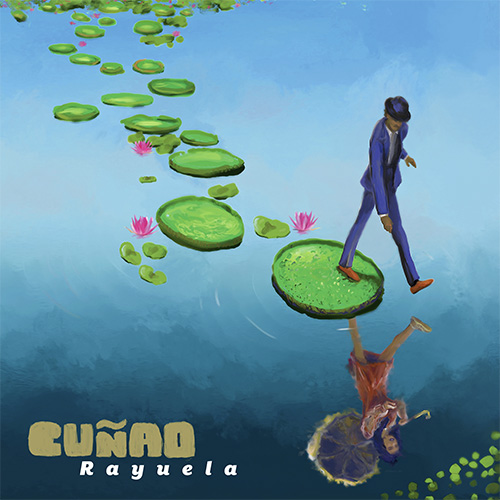 Rayuela is broken down into four chapters or ‘Episodios’:  1. Water, Life & Death, reflections on living and dying; 2. Things of the Heart, swooning love songs; 3. When?, songs about doubt; and 4. En Camino, compositions on the theme of hope.  Listeners are invited to experience the album from start to finish, but alternatively, each episode can be heard on its own as a freestanding EP of sorts.

Aside from the musical and lyrical contributions that each of the core band members made to each song, there are 5 instrumental interlude pieces, each composed solely by one of the band members as a sort of signature and a way to imprint each of their personalities within the musical work.

Offering an immediate glimpse of what is to come, the album opens up with “Las Herramientas de Ranyaya,” a playfully stark composition on the theme of death that is written and performed in its entirety by mandolin and violin player, electronics aficionado, and multi-instrumentalist Tom Moose.  Introducing the chapter on love is the album’s second instrumental piece “La Luna y la Ballena,” an emotional duet between a whale and the moon composed by lead vocalist and guitarist Julio Montero. Episode three, the chapter on doubt, starts us off with a sense of excitement and danger with “¿Que Qué?”, a solo piece composed and performed by Josel Cruz on bass, drum programming, lead guitar, and organ.

The final chapter on hope is kicked off by Craig Shields and his djembe and piano piece “Dáselo al Mar,” accompanied by Josel on bass. Episode 4 also contains a non-instrumental contribution called “El Camión,” featuring the adventurous Kerouac-esque lyrics of Gabriel Ramirez-Ortiz. While not an instrumental piece, the band felt this contribution on the theme of the promise of the open road fit really well into the chapter on hope.  The album then closes with an introspective piano piece by Severin Behen “A Media Tarde”.

The album’s first single “Quita La Mano,” released on Friday, March 13 is timed to coincide with a video premiere for the track. The song is a tale, loosely based on Montero’s own life experience, about two city youths going camping in the wilderness of the American West for the first time and encountering ghosts who are trying to communicate to them, though they are too afraid to listen. The song’s cautionary lyrics “Take your hand out of the fire, Take your hand out, And you won’t get burned” are set against the backdrop of Cuñao’s signature cinematic Latin folk-meets world-groove sound.

Another theme explored on the album, on the track “Fortunato,” is that of the immigrant loving their family from afar. This track is about someone who’s left their homeland behind to work abroad and send money home to feed his struggling family. In the song, he pleads to his distant loved ones not to forget him.

“Fortunato” was also part of Cancion Del Inmigrante, a multi-disciplinary Latin-Folk Opera written and performed by Cuñao that fuses puppetry, music, dance, poetry, and storytelling while using an operatic arc to portray the immigrant experience. Drawing from real-life experiences, it tackles themes such as children crossing the border alone, trying to find love in a new country, refugees escaping under the guise of darkness, to reflections of someone who has lost their connection to their homeland, but not feeling quite like a fit in their adopted home.

Such productions in collaboration with other performers connected to the Los Angeles fiber of artistic education are a regular occurrence for Cuñao. For example, the band is also currently working on a music video for the album’s second track “Lluvia” which will feature choreography by the theatrical L.A. based Cuerva Urban Folklorico group, with whom Cuñao often collaborate on live productions. And the band’s live shows often include accompaniment via puppetry from L.A. ‘s Beth Peterson and her One Grain of Sand Puppet Theater.

In another notable collaboration on the album, “El Compás” features guest artist  Alih Jey. Cuñao collaborated with Alih on her last album, a tribute album to her father, who was an iconic  Dominican singer in the 1960s. Cuñao performed the songs on her records and performed live with her on several occasions including the Latino Film Festival of Los Angeles in 2019 and SXSW 2019.

“Each song on this concept album deals with a different topic but there is a universality to it,” says Montero. “The stories are as diverse and multifaceted as the backgrounds and musical influences of the band itself, and the listener is free to hopscotch around and choose their own narrative. So there are different entities to this album that on the surface seemingly don’t fit together and yet here they are. I think this made for a really interesting collection.”