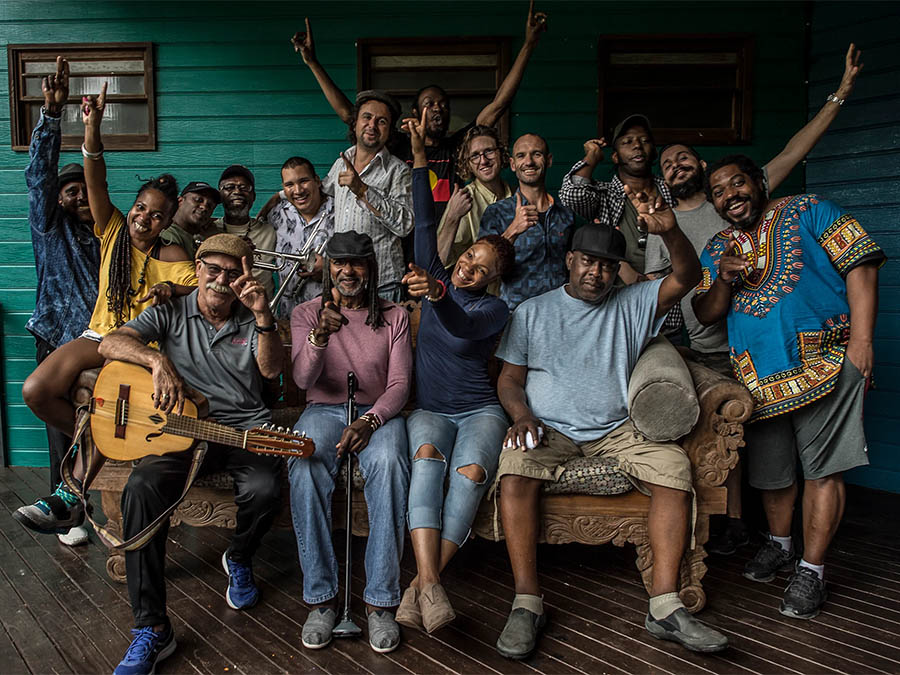 This Project unites the deep roots grooves of reggae, dancehall and rocksteady with the scorching soul of Cuban son, timba and salsa.

For generations, Cuba and Jamaica have been at the forefront of trends in music, art, fashion and food throughout the Americas. “Havana Meets Kingston” meshes these musical pathways, effortlessly blending Cuban rhythms and melodies with reggae’s rumbling basslines and hypnotic drums, resulting in an exceptional listening experience.

It took an Australian to bring these two musically rich cultures together. Melbourne producer and musician Jake Savona had already fallen in love with the music of Jamaica, having released a string of successful reggae and dub albums under his stage name Mista Savona since 2007. He first traveled to Cuba in 2014 and on his last day in Havana, he was struck with a vision: he could imagine the sounds of Cuban rumba mixed with Jamaican nyabinghi, the spiritual & folkloric styles unique to each island.

A year later, supported by a grant from the Australian Council, Savona returned to Cuba, joined by a quartet of Jamaican legends including Sly & Robbie (drummer Sly Dunbar and bassist Robbie Shakespeare), guitarist Winston “Bopee” Bowen (known for his work with Dennis Brown) and Studio One percussionist Bongo Herman. They spent the next ten days at the legendary EGREM studios recording with many of Cuba’s top musicians and vocalists. “It felt like a project that wanted to be born, and I was the one lucky enough to be in the right place at the right time,” recalls Savona.

More sessions followed, other guests were invited, and after years of painstaking effort, the first volume of Mista Savona Presents Havana Meets Kingston was released in 2017 to worldwide acclaim. By 2018 a live version of the project had performed three world tours, culminating in an incendiary show for the BBC Proms at The Royal Albert Hall in the summer of 2018.

“When I first visited Cuba in 2014, there was something in the air – it just seemed to be begging to happen”, said Jake Savona. “The album simmers with an energy, warmth and sincerity that seems increasingly hard to find in this digital age.”

Shortly thereafter Savona was back in the Caribbean to work on new recordings with a range of famous and rising stars in the Cuban and Jamaican music scenes. Much of this new record was also recorded at the famous EGREM Studio (Estudios Areito 101) in Havana, where the equipment and atmosphere has remained unchanged since the 1950s. This is the very same studio in which the famous Buena Vista Social Club album was recorded in 1996, and the Havana Meets Kingston albums share that unique sonic character and warm, woody room sound that EGREM is famous for. According to Savona “The Cubans told me an angel lives in the studio and that she blesses the music recorded there – and I believe it! Other studios we recorded at include Nelson’s Studio in Vedado, and Bob Marley’s Tuff Gong studio in Kingston, Jamaica.”

An epic set of 15 tracks, Havana Meets Kingston Part 2 unites the deep roots grooves of reggae, dancehall and rocksteady with the scorching soul of Cuban son, timba and salsa.

Savona first saw Cimafunk performing with the band Interactivo in 2015, years before he became a household name in Cuba. The music for “Beat Con Flow,” which Savona describes as “an old-school, funky, hip-hop and reggae jam,” was recorded at EGREM Studios by a top-notch band that included Sly Dunbar, Winston “Bopee” Bowen, as well as Cuban virtuoso bassist Gastón Joya and trumpeter Julito Padrón. Savona plays piano and Hammond organ and DJ Wasabi is on the turntables.

Cimafunk later recorded his vocals at a small, rundown Havana recording studio, bragging in Cuban slang about his talents as a singer and the infectious rhythm and vibe of the song. “I live at my own cool and easy tempo / And if is there are any problems / I solve them little by little / So go ahead, lose yourself to the beat / If being quiet is getting you down / Don’t worry, dance and sing / And you will see how it lifts your soul.” The song’s uplifting message and positive vibe is the perfect antidote for these challenging times.

“The Human Chain” is a powerful and uplifting rocksteady roots anthem about the looming threats to humanity. Clinton Fearon, an icon of Jamaican music who was the lead singer for the legendary band The Gladiators, sings in his trademark gravel-toned and soulful voice, “A chain is only as strong / As its weakest link / Greed and poverty / Weaken the chain / Now is the time to reflect / On what’s gone wrong / With the human chain.”

The single is accompanied by an epic music video filmed on the rooftop of a skyscraper in Fearon’s current home in Seattle interspersed with stirring clips of protest and conflict drawn straight from the headlines. The sixth single to be released so far from the upcoming Havana Meets Kingston Part 2 album, “The Human Chain” offers a stark warning and an uplifting message of hope that we can come together to strengthen the ties that bind us all.

“Guarachará,” featuring Cuban singer Dayán Carrera Fernández and a host of other stars from the island, is a scorching dance number that blends Cuban timba, salsa, flamenco and Afrobeat. The song opens with a touch of flamenco, then builds into a classic Cuban son before exploding into a high-energy salsa/timba groove that dancers will find impossible to ignore. As many parts of the world begin to open up, the lyrics to “Guarachará” couldn’t be timelier. Lead singer Dayán Carrera Fernández calls for all of his friends to join him at his home for a much-needed dance party. While the past year has seen most of us stuck in our homes longing for a social life, “Guarachará” invites people to get back together for a house party like no other. “A few days ago,” sings Fernández, “I had a feeling / My soul was hurting / And I didn’t know where my friends were / But we got together / In the end my people will get together / And we’re going to sing and dance.

The stunning music video for “Guarachará,” which was produced by Luis Toledo & Jake Savona, was filmed at an historic 1910 estate near the Havana airport. It begins with a 1940’s theme as old cars pull up to the house to deliver the musicians and flamenco dancers, who are meeting Dayán and guitarist Raynier Monserrat González in their living room. The song soon picks up into an old-school Cuban son and moves outside as salsa dancers dressed in colorful vintage clothes show off their best moves. Once the song has reached the second bridge we are transported to modern day Havana, with the party raging inside the house all through the day and night. As morning approaches and the sun begins to rise, Dayan closes the doors to his house and pianist Rolando Luna is left alone on the verandah playing the piano, for a beautiful outro to the song.

These are just a few of the many highlights on an album that will go down in history as groundbreaking masterpiece.

Mista Savona Presents Havana Meets Kingston Part 2 has been released by Baco Records in Europe, ABC Music in Australia and New Zealand and Cumbancha in the US, Canada, Latin America and the rest of the world. It is be available in deluxe CD and double LP packages filled with photos from the historic sessions and tours.