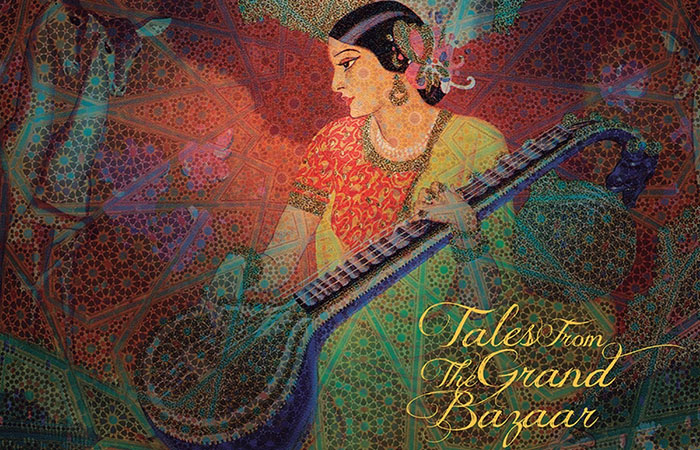 It is “Bombay” to artists from as far removed as London is from New York unabashedly referred to as such by an artist in the work of art, and not “Mumbai” as Indians have now been forced to call it. Perhaps it rings truer or perhaps it just rolls off the tongue more easily. And it would have been so utterly colonial, were it not for the ingenuousness of the artists colliding with a culture that is so eternally giving of itself. The Portuguese got there first—when in 1488, Bartolomeo Dias sailed round the Cape to find the first navigable route to India, but it was Vasco da Gama who arrived in 1497 thereby predating the Brits—who began to have relations with India through the East India Company from 1601—by almost two hundred years. However the Brits under Queen Elizabeth I were the strongest colonial power by the time the 17th Century rolled around and through royal decree for trade, political statecraft and by being just plain insidious, got the better of everyone, ultimately driving out the Dutch and the French and marginalising the Portuguese for good. Shifting Job Charnock’s capital of the East India Company from Calcutta to Bombay was a no-brainer. And while Goa became the Rome of the Orient once the Portuguese laid their hands on it, Bombay, sitting in a natural harbour smack dab in the heart of the Arabian Sea became India’s New Orleans. This despite the fact that the Emperor Jalal-ud-din Akbar and his court musician Mian Tansen had long set up shop considerably further north during the golden age of Indian music.

Why Bombay? Perhaps because Bollywood drew most musicians to Bombay after the Privy Purses were rescinded and royal patronage from India’s maharajas dried up. The various gharanas or schools of music gradually faded away—well, almost. And much as the jazz clubs and music halls of the 50’s and 60’s drew in musicians from Calcutta and the 70s had their Woodstock moments it was from the 80’s that the burgeoning industry of advertising with its commercial film makers and music directors who cohabitated with or even sometimes even doubled-up as the rather poorly paid musicians from Bollywood that sustained the art through India’s advertising industry until men like Ilyaraja and his protégée A.R. Rahman were ready to make their presence felt along with the advertising gurus such as Vaidyanathan, Louis Banks and a slew of other men and women of considerable repute, not to mention the brothers L Shankar, L Subramaniam and L Vaidyanathan, who played with John McLaughlin and Shakti, Stephane Grappelli among others, and Zakhir Hussein who has been on the leading edge of percussion since inheriting the helm of affairs from his father Ustad Alla Rakha, who was Pandit Ravi Shankar’s chosen tabalchi in the halcyon days, until his role was filled by Tanmoy Bose…

Bombay’s Jazz Yatra, now called the Jazz Utsav the biennial confluence of Jazz and Indian music held in Bombay (and now Delhi and Bangalore as well) continues to draw attention to the riches of Indian music and suddenly Bombay became India’s equivalent of Tin Pan Alley and 52nd Street and Bay Area all rolled into one. But now is the time of Anoushka Shankar and still the time of Zakhir Hussein and a whole new generation of artists from the innovative strings player, Nithin Sawhney to the percussionist, Ranjit Barot, pianist Tarun Balani and a host of other musicians. And that is only the Hindustani or North Indian music; there is much more south of the Deccan Plateau. In the South of India where the Dravidian musical anthropology flourished long before the Hindustani schools did from Tyagaraja to M. S. Subbalakshmi, Lalgudi Jairaman and M. Balamuralikrishna… not forgetting L. Shankar, L. Subramaniam and L. Vaidyanathan, three of the finest violin virtuosos in the firmament. And then there is the whole different film industry in the Tamil, Malayalam, Kannada, Telugu language film industries… Magically, no matter what the language, it’s all centred in Bombay—if not the production, then at least the post production of music in all its glory. Jump cut to London, and then New York and these two fine records: 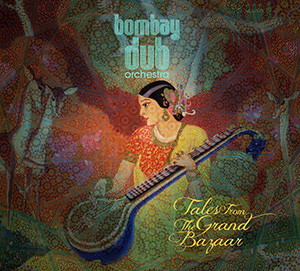 While this album does not directly anchor itself in Bombay, and while the name of the ensemble suggests that is from Bombay, it is more likely a romantic association with the heat and dust of Bombay that gives it its expansive title. The music is hypnotic and extremely suggestive of the dusty mesmerism that the city has on its visitors. But the fact is the musicians travelled to Turkey as well and as inspired as they were to write “Blue Mosaic” because of their love for the city of Bombay, they also pay homage to Jaipur in their “City of Amber” and to Turkey in “Sea of Marmara” a dense waterway that separates Turkey’s East from its West. And while the music may have been made in several cities including New York, London and Jamaica, it is the microcosm of India that is Bombay that appears to inspire the ensemble as well as the music of the record. Even “Sea of Marmara” features an exquisite vocal sung in Indian modes and seems to suggest an almost endless connection with a collision of East and West as it does in Turkey naturally as it does in Bombay, almost hypnotically and in all its spellbinding aspects.

The music on which drummer Sly Dunbar and bassist Robbie Shakespeare play is inspired and might have been the high point of the recording, its rhythm mimicking a camel of Rajasthan rather than cow off the streets of Bombay, but the violin and the wailing yowl of the vocalist more than compensates. Also, there is a subtle reference to Bollywood in the melody and the rhythm—and any homage to that cultural aspect of India must be a proverbial doffing of the hat to Bombay where East and West appears to collide as much as it is that microcosm of the great sub-continent.

About BDO: The Bombay Dub Orchestra (BDO) is an electronica/orchestral project of composers Garry Hughes and Andrew T. Mackay. From main-stage performances at the UK’s Big Chill Festival and Djing across the globe, the BDO has thrilled audiences with their music. They have also scored feature films and remixed world-renowned artists including Bob Marley for the Roots, Rock, Remixed Album, Nusrat Fateh Ali Khan, Azam Ali, Bebel Gilberto, Ceu, Dizzy Gillespie, Natasha Atlas, Juno Reactor. Their albums have reached the #1 spot on iTunes World Music charts around the globe as well as on leading US radio station KCRW. 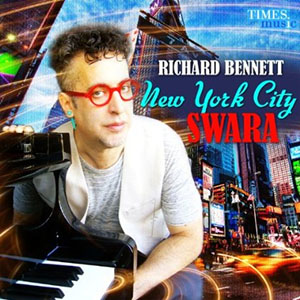 It is clear that pianist Richard Bennett fell into a time warp when he and his wife arrived in Bombay to study Indian music. Almost magically, however, the pianist discovered that he could recreate the magical melodic invention of the sitar by advancing every aspect of his right hand on the piano, while his left hand re-created the drone of the Indian veena which accompanies the sitar while playing an Indian raga. More magically he creates the sound of swans in one of the beautiful ragas in Hindustani music: “Hamsadwani”. The raga was actually borrowed or reinterpreted from the Carnatic (South Indian) raga and is unique in that it does not contain all the swaras or seven notes in the Indian scale, but rather has only five and is based, instead on the pentatonic scale. This lends itself more easily to the western instrument on which it is played and is as exquisite as it is unusual to hear, say the flute of the Indian flute maestro, Hariprasad Chaurasia, whose version is best known throughout the world.

Richard Bennett’s fascination with India brought him to Bombay, and here he discovered the great Indian tradition which unfolds as if it were the skin of an onion and as if it were myriad worlds that invariably inhabit the heart of Bombay.

Richard Bennett on the web: richardbennett.bandcamp.com

About Richard Bennett: Whether exuberant and percussive or lyrical and transcendent, Richard Bennett is a virtuoso at the piano. Bringing an array of world music and jazz influences to his music, he blends together a sound that is all his own. In New York his bands have performed at Lincoln Center Out of Doors, The Guggenheim Museum, The Rubin Museum, Brooklyn Museum of Art, and Central Park Summerstage. Internationally, he has toured over twenty countries as member of various jazz and blues ensembles. His compositions have been used forcefully for movies and dance, most notably “Fragments” for the Ailey II Dance Company and “Slope of Enlightenment” for Elisa Monte. In India he has headlined the Mumbai and Kalaghoda Festivals. His album “Raga and Blues” was released by “Mystica Music” in 2011. The follow-up CD “Rhapsody in Yaman” was released in 2012. His newest music “New York City Swara” was released by “Times Music” in October 2013.