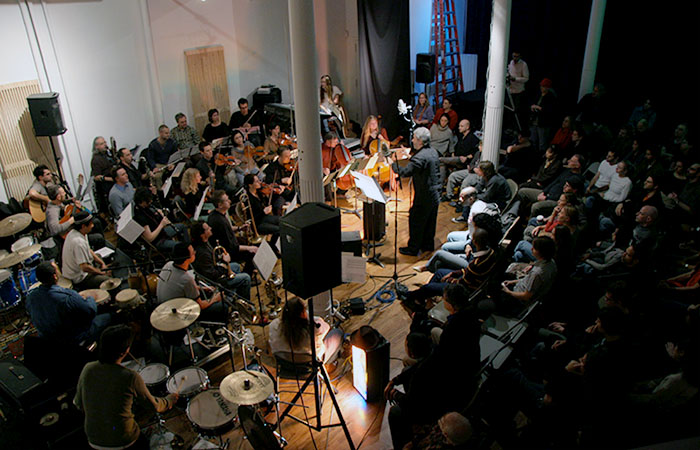 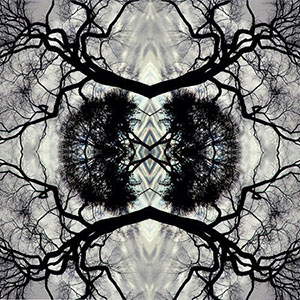 This recording of Adam Rudolph’s Sonic Mandala with the Go: Organic Orchestra is an iconic one. It is probably Adam Rudolph’s most important opus to date: symphonic in scope from its very micro aspects to its macro ones. In it Mr. Rudolph seeks to and successfully expands the textures and timbres of the instruments he writes for—which are strings, brass, reeds and winds and, of course, a hugely expanded rhythm section featuring voice percussion and percussion from continents and countries as far removed as Africa, India, Peru (and greater Latin America), Brasil, Japan and more. The through-composed work is Mr. Rudolph’s masterpiece; one that shows the percussion colourist and composer to be an important musical intellect and a major composer in addition to being a fine instrumentalist. But the music stands out as one that is an attempt to create and map a musical topography of the cosmos. Such abstractions may not be easy to locate to the landscape of earthbound music, whether it be in micro or macro states of being. But Mr. Rudolph is both canny and erudite. He chose the form (Indian) of a “Mandala”. This is a spiritual and ritual symbol in Hinduism and Buddhism, representing the Universe. The basic form of most mandalas is a square with four gates containing a circle with a centre point. Each gate is in the general shape of a “T”. Mandalas often exhibit radial balance. The term is of Hindu origin. It appears in the Rig Veda as the name of the sections of the work, but is also used in other Indian religions, particularly Buddhism.

In various spiritual traditions, mandalas may be employed for focusing attention of aspirants and adepts, as a spiritual teaching tool, for establishing a sacred space, and as an aid to meditation and trance induction. Also, in common use, the mandala has become a generic term for any plan, chart or geometric pattern that represents the cosmos metaphysically or symbolically; a microcosm of the universe. In this complex pattern of objects parallel, reflected and refracted, Mr. Rudolph moves the music with a spectacular series of percussion colour palettes that drive the music in a linear motion to form that proverbial square, frames by the fables gates to the outer cosmos depicted by the circular musical frame, created by resonant reeds, winds and brass; strings and the myriad echoes of breathtakingly radiant percussion. Looked at in another manner, this work brings together the math of Kurt Gödel, the mesmerising mathematical graphics of Maurits Escher and the counterpoint of Johann Sebastian Bach. However, Mr. Rudolph has expanded this spectacular braid into something exquisitely eternal. Many may have tried to express this relationship in the architecture of geometry, through abstract musical formulae as well as those anchored in the most beautiful concrete terms and imagery as expressed by renaissance and rococo contrapuntal music. But Mr. Rudolph does so here.

His composition is divided into twelve smaller sections, which begin by mapping out the mandala in a spectacular introduction. The subsequent sections expand each preceding section in ever-widening circles until the final circle depicting the universe as a kind of cosmic mother is performed. Percussion drives every aspect of the music as if a codified language were being established to call the cosmos into being. But the percussion might also be seen as a means to anchor one of the “T” gates of the mandala; the others being created by strings, winds and reeds, and brass respectively. When the entire orchestra comes together a great boom is heard comprising all the sections together and this is what becomes the rumble of bass and percussion followed by the strings reeds and winds, and brass that echo the might sound of this cosmic boom. It may appear that this is a score that is too linear and programmatic, but within the décor of the mandala lies a space for each instrument—from the smallest kanjira to the biggest frame drum; from the cornet to the bass clarinet; from the tiny bamboo flute to a gigantic one; the violin to the double bass—to create and innovate and improvise in the manner of anything from a florid cadenza to a space-filling free improvisation. “Part Ten” is a wonderful example of this musical spectacle. All this is in preparation for the impending audience with the Universal Mother, a tender musical caprice before the gentle fade of the music into the outer reaches of the mandala/cosmos as it were. This may be a huge and sometimes difficult work to sit through, but make no mistake it is an important one from a composer who will gain greater fame once this music is received by audiences who are looking to hear the works of the musicians and composers of the future, such as Anthony Braxton and Adam Rudolph.

Anoushka Shankar – Traces of You