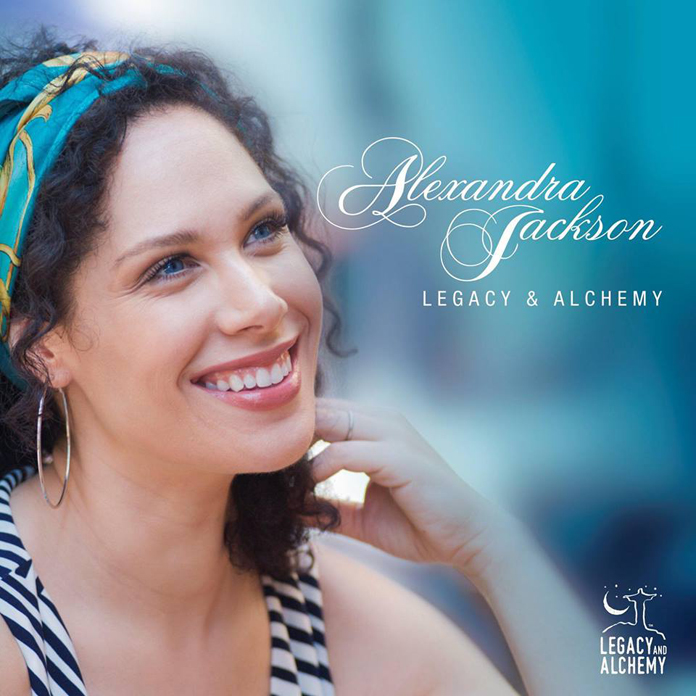 There are many ways for Americans to make Brasilian albums – many by singing in Brasilian-inflected Portuguese, sung phonetically, and not always convincingly – more so because the feeling of saudade and alegria is elusive to all except Brasilians. But every once and a while you come across a musician who, as if by magic, is able to reach into the heart of Brasil’s Deep Song. Alexandra Jackson is one of those artists who does just that. Listening to her sing on Legacy & Alchemy one gets a sense that her American heart has been replaced by a Brasilian one and now it is sangue brasileiro courses through her veins.

Not surprisingly, one of the main reasons for this is the fact that Miss Alexandra Jackson is African-American and as such has been born into the blues and jazz (as opposed to learning it by rote or second hand) and if anything the nightmare of colonialism of the Brasilian gave them the ability to cry a chorinho, etc… just as slavery gave the African American to cry the blues. And Miss Jackson now uses that unique heritage to inhabit both saudade and alegria to cry chorinho or sashaying her way through a samba, a baiao, heating up a frevo; whether she is singing in English or Portuguese as she brings to life the music of Tom Jobim or Chico Buarque, or Ivan Lins, Gilberto Gil or Caetano Veloso in inimitable and grand manner.

The remarkable aspect of this recording is the number of giants – both of Jazz and Brasilian music – who grace the recording, each in his or her self-effacing manner, from Miles Davis and Antonio Carlos Jobim on “Corcovado” and Hubert Laws on “Labirintos” to Dona Ivone Lara on “Sonho Meu” and “Força da Imaginação” and Oscar Castro-Neves with Al Jarreau on “All One”, Ivan Lins on “Anjo de Mim”, Rod Temperton and Siedah Garrett on “Our Time Now”. And these masters give of themselves generously as – like every other master musician on both discs of this two-disc set they defer to the young Miss Jackson. It is an event to be celebrated because in her raw-silken voice Miss Jackson creates aural sculptures and vocal arabesques that pay homage to the Brasilian tradition and indeed the human voice like few young vocalists.

In many respects this recording recalls the magic of Brazilian Love Affair (Epic, 1980) by George Duke as well as The Brasil Project Volumes 1 & 2 (Private Music, 1992-1993) by the inimitable Jean “Toots” Thielemans. Indeed not only for its sheer epic nature does Legacy & Alchemy rest on par with both those iconic recordings but also for the masterful nature of the music itself. It is a gargantuan project spread over many years whose time, it appears, has finally come. And just as well for with it Miss Jackson adds a monumental volume to the library of not simply Brasilian music, but music in general proving all at once that Miss Jackson is a musician with prodigious vocal musical gifts.

The release of Legacy & Alchemy (it could easily read the other way around) is a big deal in music and ought to be seen as such. It suggests the beginning of a legacy, which while it may never be the kind of landmark that her pioneering father achieved as the first Black Mayor of Atlanta Georgia, Maynard Jackson, it certainly suggests the distinct possibility of a great artistic career that is clearly hers for the asking, should she choose to continue following her dream en route to her musical Holy Grail.