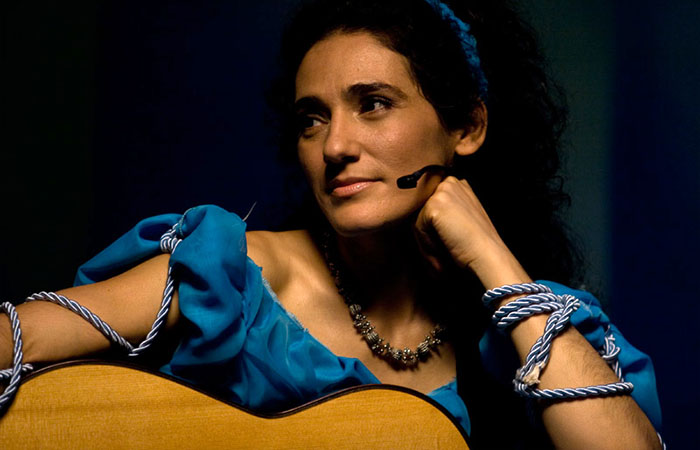 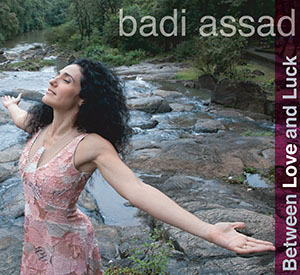 Every time guitarist and vocalist Badi Assad makes a record, she re-invents herself. The album, Between Love and Luck is no exception. But until now, Ms. Assad had shown her propensity for the guitar and genius for miraculous vocalastics, but principally in her native tongue. On this album, however, she stretches with vocals in both Portuguese and English, attempting the latter not simply in the Brasilian rhythmic idiom, but employing more universally held musical stratagems. Thus Ms. Assad—another gifted member of that musical phenomenon, the Assad family—seems to be suggesting that she is ready to take on the world. First off, she has titled the album in English and not Portuguese and then she’s written four songs in English, reaching deep down into her consciousness to sing of emotions that affect every human being almost every day. And she has done a spectacular job of it. Her lyrics are superbly crafted with rhyme and rhythm that is clever; and the feelings are soulful, as is her voice. She is singularly creative and has a unique voice and this oeuvre will go a long way to contributing to post-MPB musical literature. In other words, Ms. Assad, the English-speaking vocalist has arrived.

Surprisingly, to a large extent, Badi Assad eschews her vocal gymnastics where she sings as well as uses her tongue and throat to create vocal percussion. But when she does the effects are breathtaking, as they are in “Ultraleve” and “Spicy Moments,” the latter also features some delightful electronically produced sounds that increase the puckish nature of the song. “Between Truth and Luck” is a deep song and Ms. Assad rises to the occasion with lyrics that are somewhat metaphysical and extraordinarily beautiful too. It bears mention that this “straight” vocalising may be an attempt to suggest that Ms. Assad is, indeed, a serious singer, capable of singing aria-like songs and troubadour-like songs as well as intimate and sensuous lounge music. This goes to the heart of Badi Assad, who unlike many Brasilian stars refuses to stick to a proscribed script, but is rather a free-spirited artist; almost bohemian in many respects. This might actually bode well for Brasilian music at large, as it will truly take someone like Ms. Assad to be prepared to wow audiences worldwide instead sticking to the circle of shows in Rio and São Paulo. That is to say, break away from the insular culture that pervades Brasil given that it is a large country and seems to be satisfied with its own art scene. There is also the fact that the state of Brasilian currency and its laws do not favour “exporting” such extraordinary talent as Ms. Assad’s certainly to North America.

This goes to the heart of a post-colonial culture as Brasil and India and other countries that are attracting enormous attention. Insularity and anti-imperialism are almost rampant, sometimes long after those countries have been liberated. Caetano Veloso wrote brilliantly about this in his book: Tropical Truth—A Story of Music and Revolution in Brasil. But things may be poised to change. Musica Brasileira, a musical assault on the senses as powerful as bossa nova and as idiomatically beautiful as it is strident, as was MPB, has made a loud explosion in Brasil and Badi Assad is at the forefront of this movement.

Badi Assad on the web: badiassad.com/en/

Brazil’s Badi Assad is one of the most innovative, passionate and talented Artists of all times and is lauded as one of the world’s most unique and cross-transcendental performance artists of this generation. She transcends traditional styles of her native Brazilian music with a mixture of pop, jazz and world/ethnic sounds from around the world. As a result, the extraordinary singer, guitarist, and percussionist is successfully forging an exhilarating genre of music that quite literally defies categorization.

What makes Badi Assad so unique is her hungry pursuit of performance experimentation that no other artist has done: She combines an extraordinary guitar talent, a unique mouth percussion, beautiful singing, combining a rhythmic body movement, to create an exciting, fresh music sound, and leaving spectators… simply… BREATHLESS. Indeed, watching Badi perform is like witnessing a spiritual phenomenon. How she does what she does all at once, and delivering an extraordinary performance, is quite unbelievable.

As a singer, Badi is vibrant and electric, responding to her inner passion with deft creativity. As a guitarist, she has inspired audiences and critics worldwide with a unique combination of technical mastery and innovation that has caused many to re-examine their notions about the instrument. Through it all, Badi’s adventurous spirit and buoyant personality have become an integral part of her music.