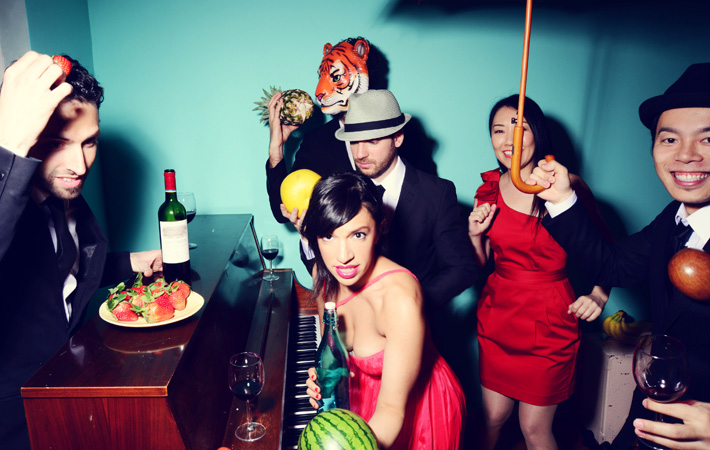 Banda Magda gave notice that a magnificent new group was breaking through at the time they released Amour t’es la?. That linear leap has given way to a vertical propelling of Banda Magda into the rarified realm of magical musical sojourns. This also means that its beautiful leader, Magda Giannikou has established herself as the resident bona fide genius. Only opera singers do better, if at all, by singing in various languages and doing it near-perfectly; which makes Ms. Giannikou in a minority of one for a vocalist to excel in English, French, Portuguese, Spanish and her native Greek. The allure of Magda Giannikou is her sultry and vulnerable tone. Her mesmerising manner, as she breathes into her fluttering lines is another irresistible feature of the vocalist’s tone and manner. The notes and lines of each song seem to glide from her mouth swathed in the warmth of her feverish breath. Notes sizzle and burn as she melts them with her innocent sensuousness. Ms. Giannikou embodies the best qualities of a great artist: a childlike demeanour, the irresistible charm of viewing the world with the immensity of a peeled eye and being in a constant state of childlike wonder. Banda Magda is a reflection of all of these qualities. 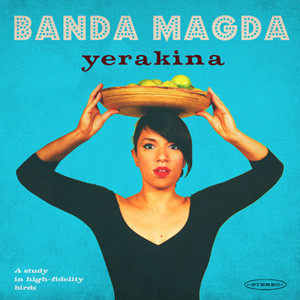 The sophomore record, Yerakina is so magical that each line spun into song as gossamer-like. From the perky choro, “Sabiá” by Luis Gonzaga to the majestically dream-like versions of “Doralice,” “El Pescador” and “Cucurrucucú Paloma” it is impossible to find anything but perfection in Magda Giannikou and her collective doppelgänger, Banda Magda. Then there is the uplifting samba “Senza Paura” that closes the album and everything in between that fills it with untold beauty and ingenuity. Writers will be rushing to wax eloquent about the album, but words will fall short of its masterful craftsmanship and intelligence. Words will also fail to describe enough the tremendous reach of its musical showmanship; the breadth and scope of its ingenuity—all this in a near-flawless package of CD and DVD. In fact the only drawback, if any, is that the length of the album leaves the listener gasping for more; wanting the music never to end. But making up for the shortfall in length and time is the DVD—a wonderful collection of videos showing how much the group—and Ms. Giannikou—have grown. Moreover, matching the musicianship is the breathtaking showmanship that these musicians show in front of the camera.

Ms. Giannikou is fortunate to have at her command, a wonderful team of musicians, such as guitarist Ignacio Hernández, who works tirelessly to shape the musical content harmonically, playing with great virtuosity on his various guitars. Percussion colourists Marcelo Woloski and Keita Ogawa and bassist Petros Klampanis, joined here by bassist Haggai Cohen-Milo hold up not only the rhythm elements, but also all the melodic content with their astute mingling of exquisite time-keeping and, magically, some melodic playing, while the vibraphonist Mika Mimura, playing with sliding angularity, make for the breathtaking polyphony that uplifts the music of this band. And then there is the sophistication of the arrangements, all of which are Ms. Giannikou’s, which raises the ante of this album a thousand-fold. Finally there is the unmasking on the ever-present tiger-face on both album covers: this is percussionist Keita Ogawa, who it is important to note, gives the album a certain playfulness that only Banda Magda seems to be able to pull off while they blur and break the boundaries that restrain musical agility.