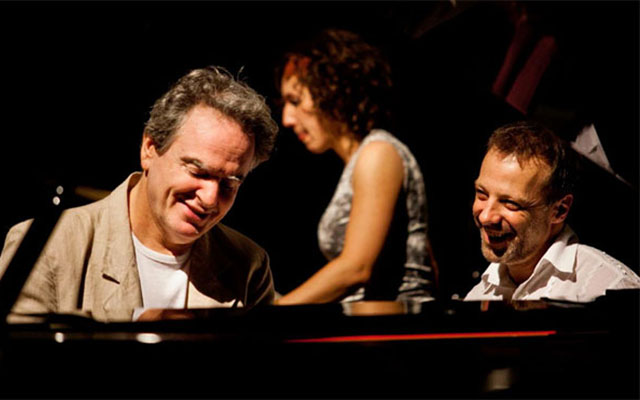 There is never any precedent for the work of pianist Benjamim Taubkin. Here he is again traversing music’s topography with drummers/percussionists Simone Sou and Guilherme Kastrup. The result is an album of startling brilliance that once again pushes the boundaries of music’s borders, while blurring the lines that separate musical genres with idioms and metaphors that recall the poetry Arthur Rimbaud and Nazim Hikmet, and Geraldo Carneiro and Thiago de Mello making music with poetry of its own. Mystery and magic surrounds the music of Sounds of Life. In its dazzling evanescent state lies an odd permanence, like Salvador Dali’s the great work, “The Persistence of Memory”. That the music has such a surrealistic quality to it is some marvellous happenstance. I cannot think of any reason why this should have happened any other way except in an impromptu setting where the pianist and the percussionists stirred the music in a veritable cauldron of rhapsodic fantasy. The only given here is the sheer sense of adventure that all the musicians have brought into the recording studio. 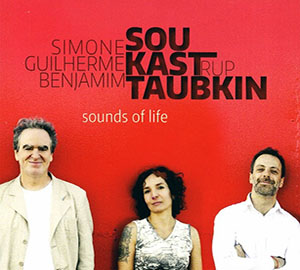 Benjamim Taubkin’s sleek and unruffled technique, stylish intelligence and watertight structures justify his reputation as the prototype modern pianist and ultimate role model for conservatoire students and competition contestants. His playing here is increasingly angular, unfettered and bracingly communicative. For example on “Fábrica de Sapos” Mr. Taubkin is expansive, though more sharply accented and contrapuntally complex than in his reading of, say, “Choro Bororo”. While in “Improviso (E o que veio depois) broken chords playfully capture the composer’s purported depiction of a pianist who can’t keep his hands together and the staccatos of the piece have a lovely woodwind-like edge to them. Benjamim Taubkin is also one of the most chameleonic pianists I know; a shape-shifter, if ever there was one. He seems to assume the architecture of the music in dramatic fashion, turning colours and textures almost at will, as the music ebbs and flows graciously.

This unparalleled musical genius has been perfectly cast with two other musicians of great ingenuity: Simone Sou and Guilherme Kastrup. These two percussionists have distinctive styles that seem to flow from a primordial almost visceral source where the heart of the musical mystery of mysteries. This duo boasts a uniquely robust style. Ear-catching details abound in their music, no matter what percussion instruments they are playing at any given time. Their performances individually as well as together are piercingly accurate. The “shock and awe” with which the music is despatched percussively as a duo as well as with Benjamim Taubkin contains marvellous trickery. Musical adventures fly off their instruments and foam at the proverbial mouth of each of the percussionists. Impetuous fingers put a magisterial spin on their music and like the lofty pianistic paradigm the percussionists are confronted with they are never out of step, their chains and trills and rapid left and right hand figurations make treacherous leaps across the wide open vistas created by Benjamim Taubkin. Overall this disc amounts to a most attractive issue and who better to make it happen than Adventure Music, one of the most daring music labels today.

Brazilian music has been the playing field for this instrumentalist, arranger, composer, and producer. Benjamim Taubkin started his studies at the age of 18 and soon begin to dedicate himself fully to this career, working in important plays such as Ópera do Malandro from Chico Buarque de Holanda, and 39 of Flávio Rangel; and at contemporary dance studios like Ruth Rachou, Klaus Viana and Clarisse Abujamra. Inspire by the desire of playing jazz and bossa nova, he performed in music venues in São Paulo. Read more…