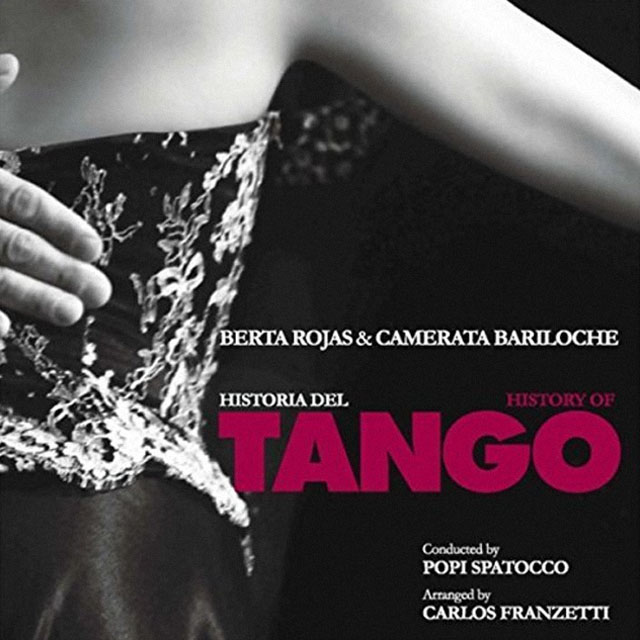 We hear so much about tango these days that we may be at risk of forgetting how preciously beautiful it really is. But there’s not much danger of that happening, or with tango receding from our consciousness with this beautiful disc Historia del Tango by Berta Rojas. It may be my imagination but the flow of tango recordings seems to have slowed in recent years. If so, that’s a pity, because when this music is played right it can course through the room like a sensuous splash of crepuscular moonlight. Certainly this is true of Historia del Tango for here is where the spark of Gardel’s and Piazzolla’s inflammable brilliance is eternally ignited.

Perhaps the wait has been worth it, because these performances by the absolutely lovely Paraguayan guitarist Berta Rojas and Camerata Bariloche have the heat to make your blood run faster. Not the kind of hard-driven, percussive kind so often encountered today; on the contrary – and especially with extraordinary arrangements by Carlos Franzetti – line and twirl is always respected, tempos are up there with pace, but never over-pushed, and Ms. Rojas’ magnificent is allowed to speak with sensuous warmth and humanity. There is plenty of detail, but it is natural and never fussy, and ornamentation is always clever, sometimes humorous, and often delightful.

All of this takes place with technical excellence of the highest order – the exactness with which only Ms. Rojas can articulate – with cutting precision of the scurrying continuo in the finale of Piazzolla’s “Historia del Tango” Add to that a recorded balance that hits the perfect combination of blend and clarity, and you have the ingredients of something forever memorable. But what shoots this recording to the top of the pile is the sheer joy of it, the surging musical energy of its many graceful feints and sallies. How grippingly, for instance, the tension climbs in the often polite movements of the Gardel tango; how liltingly the off-beat theorbo strums add springy definition; and how invigoratingly the taut energy of those semiquavers in “Paloma Blanca” find release in a glorious chain of suspensions, and the seductive interplay of characters is suggested in the final bars of that tango as it spills over into a final-note twiddle that is pure natural exuberance.

Such things we have come to expect of Berta Rojas of course, but in these pieces her musical personality finds a home so congenial that it simply bursts from the speakers. Not that it is all fireworks and explosives, however, as the best-known soli are subtly-drawn, with slow movements of concentrated stillness and lyrical beauty and a gently coaxed repertoire that exudes pure joy in its delicate dynamics, perfect tempos and free-spirited attitude to ‘rubato’ likewise creates a winsome expressive world of its own.

There is no doubt that Berta Rojas has the ability to empower the minds and bodies of the 18 players in Camerata Bariloche too. The results of this are performances with a wonderful sense of mutual bonhomie and spirited team-play. The performances are such that they easily surpass those by any other chamber orchestra under any other baton playing any other arrangements. Perhaps that can also be ascribed to the true century of the tango, but another factor is that there is probably no more inspirational musician working today than Berta Rojas, and she is playing arrangements of iconic music by no better arranger than Carlos Franzetti.

Renowned for her flawless technique and innate musicality, Berta Rojas ranks among today’s foremost classical guitarists. She has been praised as “guitarist extraordinaire” by the Washington Post and by Classical Guitar Magazine as “Ambassador of the classical guitar.” She has been nominated twice for a Latin Grammy Award; in the category of Best Instrumental Album for Día y Medio – A Day and a Half, a duet with Paquito D’Rivera (2012), and in the category of Best Classical Album, for her album Salsa Roja (2014). Read more…