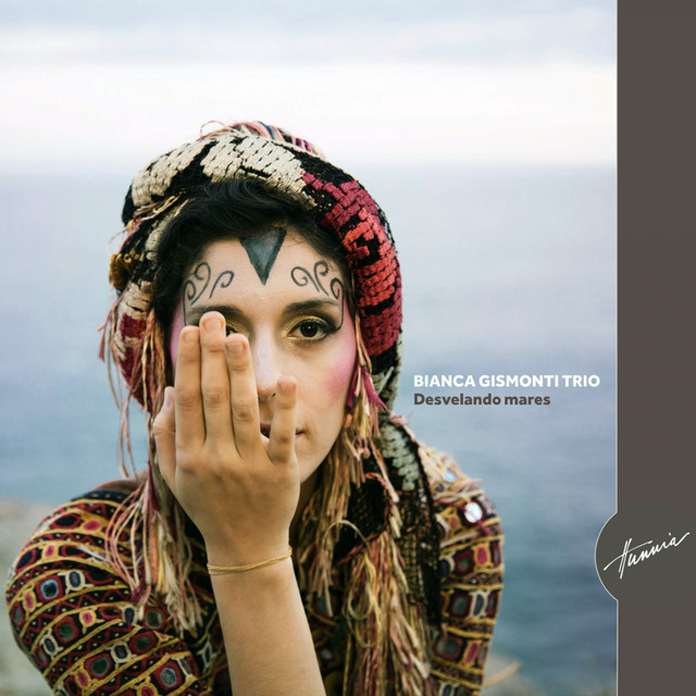 Perhaps the greatest gift a father as famous as Egberto Gismonti could have bestowed upon his children would be a questing one; that boundless yen to dig deep into his or herself, to discover what it is that makes the singular “Gismonti” heart beat and to describe its melody and rhythm in harmony with the surroundings in which they were born. This is certainly what we seem to have in Bianca Gismonti. Far from being hidden this gift is manifest, in her music, in all its radiant brilliance. Like the work on her other recordings, once again on Desvelando Mares the fingers of her hands have become diving rods that seek inner wellsprings of music both within her own body and in her environment outside.

Miss Bianca Gismonti is far from a musician similar to her famous father (although many liken her music to his). The comparison between the two ends with the restless curiosity for that which is most ephemeral about the poetics of music and the determining the elemental truth of sonic expression. Although both also share the good fortune of being born into a cultural topography that is teeming with terrestrial and celestial life and both will do everything to bring the melody and rhythm of it all to fruition. And yet, just as her father, Miss Gismonti does a fine job of making the black dots that she may have put down on paper leap and pirouette in the air, creating great arcs and parabolas of questing song.

The composer and pianist describes the impulses from whence these songs sprung in her pithy liner notes. But she needn’t have to; the works themselves present all of the beautiful stories and paint vivid pictures that they need to in order for us to be swept away on a kind of epic musical odyssey with Miss Gismonti, bassist Antonio Porto, drummer Julio Falavigna and the many other musicians who join her and the core trio on this journey which, in keeping with their impulses reference the metaphor of a tumbling sea being slowly revealed one song at a time.

The wheezing accordion played by Bebe Kramer on the meditative “Salteo” sounds as if it were a kind of old apparatus bringing the musicians’ maritime vessel to life, which is then propelled by Miss Gismonti’s piano on its endless quest that takes her like a modern-day Vasco Da Gama on a seemingly endless journey – only hers is a musical one. The journey is a long and fascinating one during which we may be appropriately mesmerised by the rhythms and that that leave us spellbound (“Feitiço” is so-appropriately labeled one of these times). Miss Gismonti displays a fine sense of the surreal in “Aonde Planam os Pássaros” and on the seemingly endless (fortunately for us) “Ventos do Sul” as well as “Celestial Sphere”.

On other music she celebrates her virtuoso pianism leading us through a hypnotic dance on the music of “Ostinatos”, “Piano Station” and the indescribably beautiful “Majo”, which is laced by the incredible vocalastics of the great Maria João. Meanwhile through one of the most compelling charts – “Aonde Planam os Pássaros”, aided and abetted by Mr Falavigna’s superb performance on tabla, Fabio Mentz’s on the Indian bansuri (flute) and Ganapati’s sitar – the album achieves a kind of musical creation as if reaching for the mythical birds described in the song itself as we continue to remain in a sort of suspended, animated state of wonder through “Celestial Sphere”, which brings Miss Gismonti’s (and our) magical journey to a close.