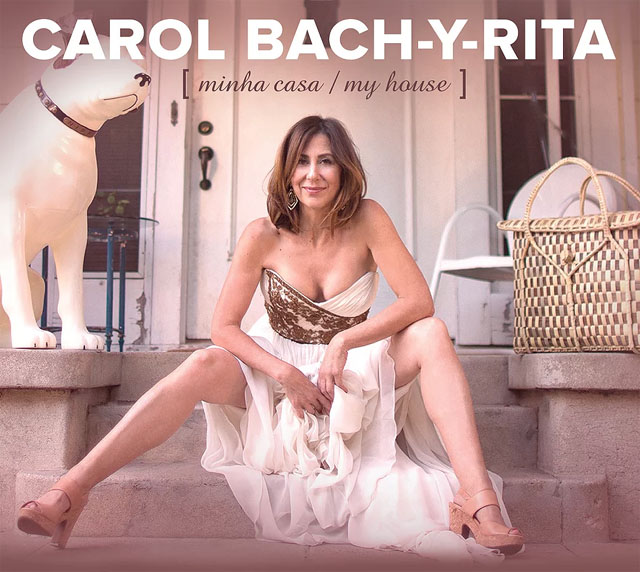 Although there is a proliferation of American musicians – especially vocalists – who are dipping into Brasilian repertoire, mostly singing phonetically, it is an adventure fraught with complexities, danger and ultimately failure. Voice-coaches can only do so much and even some of the best students fall short. However, the ones who get through can be quite convincing, not only in the manner of their renditions of Brasilian music, but also in capturing the elusive ‘saudade’, for which there is no real English translation, except to say it’s similar to ‘The Blues’. And here lies the rub; because if you thought that singing ‘The Blues’ was the same as feeling it then perish the thought. Likewise with ‘saudade’, which is a feeling that is so hard to explain, and impossible to feel if you have not been born with or gifted a Brasilian soul. Among those who have been gifted with one is Carol Bach-y-Rita.

Minha Casa is only her second recording, but Carol Bach-y-Rita had made the leap into the ‘big pond’ even with her first album, rendering such challenging music as that of Moacir Santos and Kleber Jorge with much more than metronome tempos. Bending beats, delaying, and slurring and shuffling on or around rhythmic pulses as Brasilian rhythmists do, Carol Bach-y-Rita made you believe she was a Carioca, or a Paulista and sometimes, as on her exquisite maracatu, “April Child”, native to Pernambuco. By the end of that programme, she was palpably ‘Brasilian’. On Minha Casa you will warm to her blithe Brasilian spirit that much more. Her music is much more relaxed and supremely confident, shedding a jazzy skin and putting on her Brasilian one with transcendent sensuousness; a beckoning sexiness that you won’t find in even Guinga playing Guinga. So much so that one might find a little bit of ‘heaven’ here on earth in the form of “Pra Quem Quiser Me Visitar”. And her maracatu, “Trust” is exceptionally authentic; more proof of her Brasilian musical domicile.

Carol Bach-y-Rita has also raised the bar considerably on this recording showcasing not only her skill at composition, but at arranging – even re-arranging – classic American songs and Jazz standards. Her wonderful stroke of the open on Dizzy Gillespie, Frank Paparelli and Eddie Jefferson’s “A Night in Tunisia” is not only a worthy homage to Eddie Jefferson’s vocalese original, but a wondrous jazzy turn in itself. The singer’s version of “Nature Boy” is certifiable masterpiece and “Love Look Away” is a close second, but by a hair’s breadth. And then who would have thought that she would be crazy enough to even attempting a Joni Mitchell song, and that too one on which Mitchell had collaborated with the great Charles Mingus. That’s certainly not for the faint of heart. But Carol Bach-y-Rita pulls off “The Dry Cleaner From Des Moines” with transcendent artistry. I would be remiss if acknowledgement was not made of the splendid support of Bill Cantos, Larry Koonse, John Leftwich, Mike Shapiro and Dudu Fuentes (on the wickedly witty and deliciously risqué “Gardening With No Pants”).

So what really is this mesmerising appeal of Carol Bach-y-Rita? By the end of Minha Casa it becomes more than simply a matter of exerting her Brasilian soul, although its quintessence is eminently plausible. Common to the entire repertoire on this recording is an irresistible brightness and freshness, a clarity that fascinates the ear with internal detail, and a glowing vocal sound. Above all it is an almost fragrant refinement and an impeccable combination of sensuality and percussive weight that enables Carol Bach-y-Rita to zone in on the rhythm and poetry of what she sings with formidable richness.

Kenia Presents: On We Go