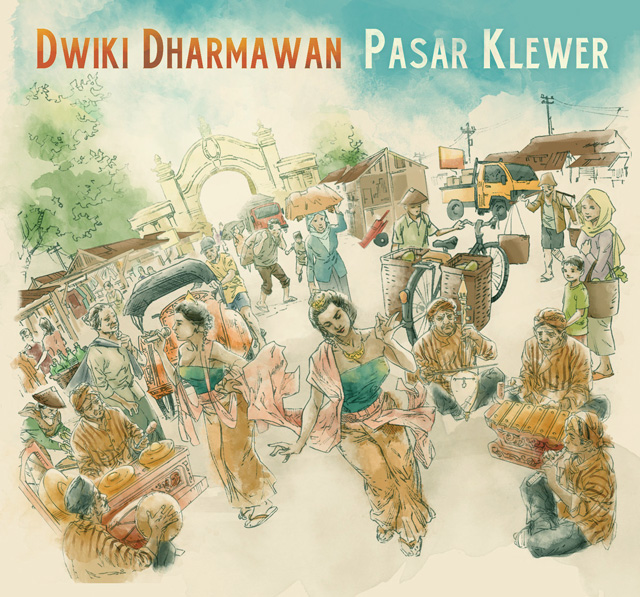 It is almost possible to listen to Pasar Klewer by Dwiki Dharmawan as more than analogous with Klewer Market, the largest textile market in Solo City, the Indonesia, if you let its diaphanous aural fabric embrace you and vice-versa. This two disc set makes an urgent case to broaden the musical horizons with its cultural topography that extends from the Far East via India through Europe and America. This album is like an elegant and fabled railway system that links composed and improvised music, traditional Indonesian music, Hindustani and Carnatic music, middle eastern music and post-modern chamber music style of the European conservatoire. But to describe it as such gives the impression of over-cooking when in fact it is a work of great subtlety.

Dwiki Dharmawan may not be known – not even to musicians – beyond Britain. But he ought to be. The Indonesian pianist and keyboardist is an icon in his own country and, under the auspices of Leonardo “MoonJune” Pavkovic and his MoonJune imprint has been introduced to musicians and audiences in Europe and Britain. And just as well. Dwiki Dharmawan is a pianist possessed of an aristocratic elegance. He is a master of mood and atmosphere, with the ability to coordinate colour and structure to a rare degree. Pasar Klewer reveals his exceptional versatility and resourcefulness in this regard as he brings a unique cocktail of juicy, jazzy brilliance to song after song. Moreover he is a true entertainer who, even in this large studio recording, is able to convey a sense of dramatic and lyric theatre song after song, sometimes with justifiable volcanic eruptions.

On both “Pasar Klewar” the opening of Disc One, and on “London in June” from Robert Wyatt’s ineffably beautiful songbook he is a fire-breathing dragon lighting up the music with mysterious depths and sinister shadows glimpsed by moonlight. The surprises, when they come on both discs are effective but discreet. The gamelan-like riffing that begins “Lir Ilir” on Disc Two is played with arpeggiated harmonics before giving way to a delicate curlicue of a bass line that explodes into a meandering passage featuring breathtaking guitar by Nicolas Meier and otherworldly vocals by Peni Candra Rini, while Dharmawan goes on to reveal the full extent of his tonal palette. This is par for the course throughout the music on both discs for Dwiki Dharmawan. In sheer colour and variety, in the depth of its characterisation and the range and refinement of his pianism, Dharmawan imparts a power and stature to his music, which no amount of ‘bigness’ (the route some might take) can achieve.

Having the reeds player, Gilad Atzmon on the set lends a magical air to any music that he touches. His breathy clarinet on “Bubay Bulan” is truly inspired and so full of delicate touches that it feels almost mystical. Bassist Yaron Stavi enhances the bottom end of the harmonic bed with deep gravitas, while Asaf Sirkis on mallets maintains the insistent pulse and Dwiki Dharmawan magnanimously recedes from the limelight. “Frog Dance” is marvelously upbeat and sees Atzmon put away the bittersweet sound of the clarinet in exchange for a soaring soprano saxophone. The energy from this piece and its infectious vamp that brings about a brighter key change in its second half features a monumental piano solo by Dharmawan, who together with this extraordinary group of musicians light up the rest of the disc.

All in all, a world of piano styles evoked by Dwiki Dharmawan, as few could even hope to try, beautifully recorded by Phil Bagenal, and mixed and mastered by Mark Wingfield (who also contributes a stunning guitar solos, especially on the instrumental “Forest”) with near-audiophile perfection.