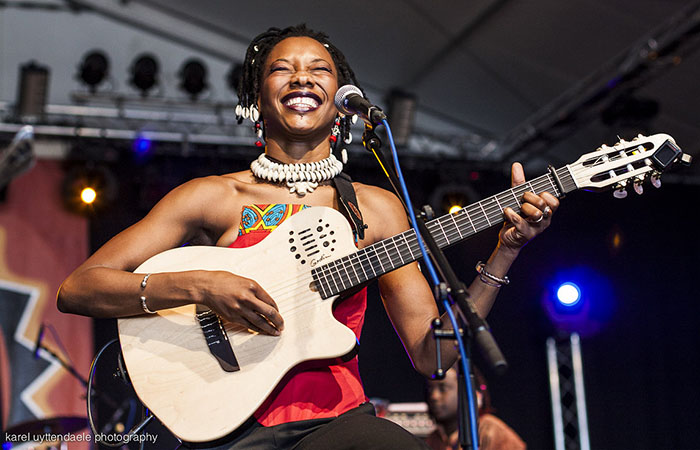 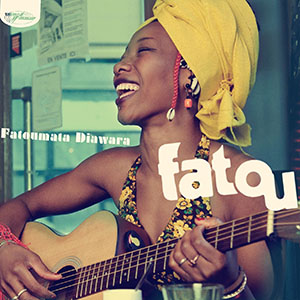 The Malian sensation Fatoumata Diawara is fast making her name around the world. The move to France first got her recognised and now she is one step away from the world. A woman who has near perfect-pitch, Ms. Diawara, like most African singers does not necessarily rely on pitch to the extent that an European or an American vocalist would. Rather she sings in minute quarter-tones, modulating her voice with great skill to negotiate even the most wildly undulating lines. This she does in her album Fatou with great effect, despite sounding somewhat low-key most of the time. Ms. Diawara is also an accomplished guitarist and accompanies herself as she sings. She is also a fine composer, writing lyrics that swirl with romanticism. Her lyrics contain inner rhymes and when combined with the rhythm of her music have a wonderful lilt to them. This beguiling and often hypnotic rhythm is informed by the swagger of camels in a caravanserai making their way across one of the great deserts of Africa.

On this recording Ms. Diawara has assembled a magnificent ensemble and she varies the combinations of rhythm sections as she strives to make minute changes in the tone of her music. She is a clever musician and makes her ensembles do her bidding like Malian diva who is singing short narratives in her native tongue. There is also, at times, an intimate aura about her vocals, almost as if she is shy of the effect that she is having on her audience. This should not be seen as a weakness because of course it is not. Only that she is being beguiling and seductive. Consider the wonderful undulations of “Sonkolon” where the vocalist is absolutely mesmerising as she sings just half a beat ahead of her own guitar and that of electric guitar and the n’goni. There are several other moments on the recording where Ms. Diawara makes her presence felt by eschewing flash in favour of allure. Musically, the recording is a generous fusion of roots-orientated Malian music with gently rocking western guitars and bass introduced in the mix. But this is never intrusive.

The Malian-French production also includes such luminaries as the great kora player, Toumani Diabate, who plays magnificently on “Mousso”. Ousmane Keita is equally memorable on Kamel n’goni, a hunter’s lute that he plays with great virtuosity. Other notable performances are by the former Led Zeppelin organist and bassist, John Paul Jones, who lays down the bass line with a great deal of gentility on “Sonkolon” as the chart makes its ululating way through chorus after lyrical chorus. This album may not have the flash and spin of some of the more popular African albums, but like the great Berber ensemble, Terrakaft, it is charged with an emotion that burns with a cold blue flame. That is the kind of crepuscular beauty that Fatoumata Diawara imparts to her extraordinary music, one lyric at a time. And this is what makes the album so endearing and memorable in its own way.

*Concert for Mali: Fatoumata Diawara with Bassekou Kouyate (A Celebration of African Music) – Saturday, February 1 at 8 pm | Koerner Hall, Toronto. Tickets are $30-$70 and are available online at www.performance.rcmusic.ca, by calling 416.408.0208, or in person at the Weston Family Box Office.

Fatoumata Diawara on the web: fatoumatadiawara.fr

Malian singer Fatoumata Diawara (aka Fatou) was born of Malian parents in the Ivory Coast in 1982. As a child she became a member of her father’s dance troupe and was a popular performer of the wildly flailing didadi dance from Wassoulou, her ancestral home in western Mali. She was an energetic and headstrong girl and at the age of twelve her refusal to go to school finally prompted her parents to send her to live and be disciplined by an aunt in Bamako. She was not to see her parents again for over a decade.

Her aunt was an actress, and a few years after arriving, Fatou found herself on a film set looking after her aunt’s infant child. The film’s director was captivated by Fatou’s adolescent beauty and she was given a one line part in the final scene of the film ‘Taafe Fangan’ (‘The Power of Women’). This led to her being given a lead role by the celebrated director Cheick Omar Sissoko in his 1999 film ‘La Genèse’ (Genesis).

At the age of eighteen Fatou travelled to Paris to perform the classical Greek role of Antigone on stage. After touring with the production she returned to Mali where she was given the lead in Dani Kouyaté’s popular 2001 film ‘Sia, The Dream of the Python’. The film tells the story of a West African legend called Sia, a young girl who defies tradition. To many in Mali, Guinea, Senegal and Burkina Faso, Fatou is Sia thanks to the film’s enormous success throughout the region. Offers for further acting roles poured in but Fatou’s family wanted her to settle down and marry and forced her to announce, live on Malian television, that she was abandoning her career as an actress.

In 2002 Jean-Louis Courcoult, the director of the renowned French theatre company, Royale de Luxe, travelled to Bamako to offer Fatou a part in his new production. An unmarried woman is considered a minor in Malian society so her family’s permission was required. They refused. After much soul searching Fatou took the daring decision to run away and at Bamako airport she managed to board a plane for Paris, narrowly escaping the pursuit of the police who had been alerted to the girl’s ‘kidnapping’.

With Royal de Luxe Fatou performed a variety of roles around the world including tours in Vietnam, Mexico and throughout Europe. During rehearsals and quiet moments she took to singing backstage for her own amusement. She was overheard by the director and was soon singing solo during the company’s performances. Encouraged by the reception from audiences she began to sing in Parisian clubs and cafes during breaks from touring. Here she met Cheikh Tidiane Seck the celebrated Malian musician and producer who invited her to travel with him back to Mali to work on two projects as chorus vocalist; ‘Seya’ the GRAMMY nominated album by Mali’s star Oumou Sangaré and ‘Red Earth’ the GRAMMY winning Malian project by American jazz singer Dee Dee Bridgewater. When the albums were released Fatou toured worldwide as singer and dancer with both projects.

On her return to France Fatou took the role of Karaba in the popular touring musical ‘Kirikou and Karaba’. She was encouraged to take the role by her friend Rokia Traore who also inspired her to take up the guitar: “To me it was a wonderful and daring thing: a Malian girl with an acoustic guitar. Why should the guitar be only for men?” Fatou bought herself a guitar and started to teach herself, and at the same time began to write down her own compositions.

She made the decision to dedicate herself to her passion, music. She worked to complete an album’s worth of songs and started recording demos for which she composed and arranged all the titles, as well as playing guitar, percussion, bass and singing lead and harmony vocals. An introduction from Oumou Sangaré resulted in a record deal with World Circuit and the recording of her debut album.

Fatou’s EP ‘Kanou’ was released on 9 May, followed by her debut full length album ‘Fatou’ on 19 September 2011 to much critical acclaim. The album was awarded No.1 album 2011 in the world music charts, where it remained for 6 months. It was also given No.1 in several end-of-year album polls including The Times and Mojo.

Following the release Fatoumata performed as part of Damon Albarn’s album and live project ‘Rocket Juice and the Moon’ (Honest Jon’s) which featured himself, Tony Allen and Flea. Fatou also featured Roberto Fonseca’s recent release ‘YO’ and on Bobby Womack’s album ‘The Bravest Man In The Universe’ (XL) which was co-produced by Damon Albarn and Richard Russell.

In September Fatou 2012 boarded the Africa Express Train with Damon Albarn, Baaba Maal, Amamdou and Mariam, Nicolas Jaar, and the Noisettes, amongst many others. The tour was a huge success selling out each venue it played in. The show culminated in a 4.5k venue in Kings Cross where Fatou performed with Paul McCartney.