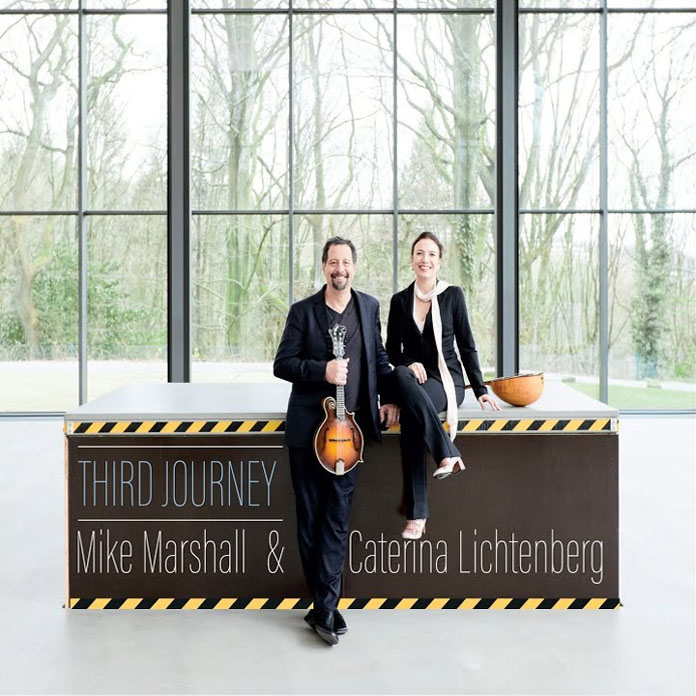 Like both their previous recordings Third Journey by Mike Marshall and Caterina Lichtenberg is a benchmark one; historic in so many ways, just as the very instrument they both play with a vastly different kind of virtuosity. Factually speaking the mandolin was first heard believed to have existed in 13,000 BC when frescos of it were made in cave found in France and that it rose to eminence principally as a Middle Eastern lute – some would say as a precursor to the modern oud – then in the classical music realm in Italy long before making it in country music and Bluegrass music in America. But in the hands of both Mr Marshall and Miss Lichtenberg all of this history in time and stylistic development seems to have come full-circle, despite the fact that if you listen very carefully, the singular touch of each musician brushes the mind’s ear in subtle, feather-soft strokes of restless fingers on pliant strings. It doesn’t get any better than this.

In the hands of these two great technically sublime musicians the history of disparate musical worlds collides and Time seems to melt in the heat of their playing. While partnerships between performers playing the same instruments particularly of the lute family are uncommon among classical musicians, in the world of popular – or more contemporary musical styles – some celebrated duets and trios come to mind. Perhaps the most famous of these have been the ones that included guitarists Paco de Lucía, John McLaughlin, Larry Coryell and Al Di Meola. Miss Lichtenberg and Mike Marshall have – in their three encounters – created some of the finest collisions of musical cultures and the music of Third Journey is probably the finest result of this excursion among all of their magical encounters on record.

Miss Lichtenberg first: Hers is a playing style derived from the exacting Swabian style that owes much to Sicily. History apart, Miss Lichtenberg employs what might be construed as classically produced dynamics; minutely nuanced variations of touch, articulation and expression that not only define her playing, but also make her one of the greatest performers on the bowlback mandolin. A fiercely driven technician, she also displays a myriad of tonal and colour gradations in her playing, while emphasising the softest possible timbre of the instrument. Mr Marshall, on the other hand, comes from the American Bluegrass tradition, one given to a roistering adaptation of the western European folk tradition that came to the New World and developed at the hands of Jethro Burns and Bill Monroe – and now David Grisman. Mr Marshall picking style is born of a harder edge, but he is also quite master of caressing the steel blending the more rustic voicings of Bluegrass with the pliant swing and the molten glissandos of jazz.

Both “Prelude from Partita #3 for Solo Violin in E Major” and “Ground in C” bristle with ideas and exchanges that seem to herald the uncorking of a kind of musical time capsule where styles and periods in music dissolve in the masterful exchanges between Miss Lichtenberg and Mr Marshall. But it is in songs such as the puckish “Cat Got the Mouse” and “Mara’s Sleeping Song” that the symbiotic relationship between the two players shines brightest as each broaches a melodic subject and tosses it forward for the other to catch it and take it to a rarefied realm. The work in all of this repertoire is fabulously playful, heart-stopping and utterly masterful.

No recording with Mr Marshall on it would be complete without a deep dive in some Brasiliana and what better than “Diabinho Maluco”, a diabolically challenging composition by the master of the Brasilian bandolim, Jacob do Bandolim to show off the performers chops and a transcription of Waldyr Azevedo’s “Queira-me Bom” to close out this benchmark recording by two of the world’s most mesmerising players on the mandolin?