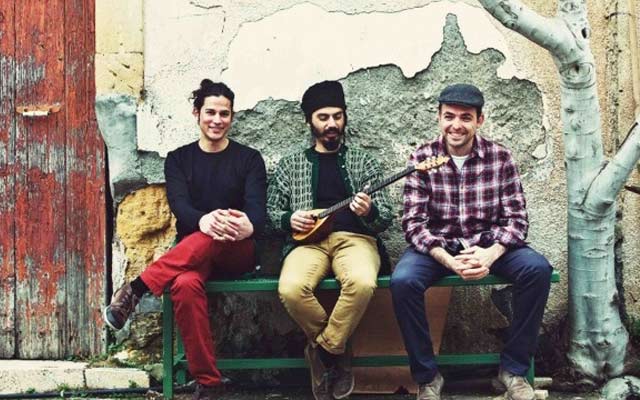 Demettris Yiasemides, Angelos Ionas and Antonis Antoniou, collectively Monsieur Doumani, have put together a diverse programme with some thought, though personal connections predominate – the group’s ancestry links to Cypriot folk songs. Here a wondrous and myriad array of stories abound. The group also plays to their strengths, and indulge their skills in personal and artistic tendencies. So here, we have the title Sikoses conjuring the rituals during the ten days before lent when no meat is eaten. However before the oncoming season is a ritual celebrated with joi de vivre in the music that Monsieur Doumani have created. 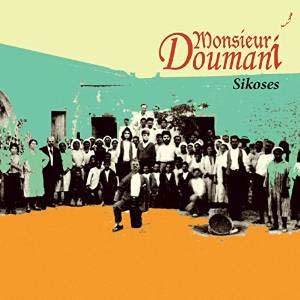 Fierce, political awareness also informs the music written by these three talented gentlemen and there’s evidence of real imagination behind their music. For instance there is no polemical words, only a wistful lyricism; a yearning for an end to melancholy. Everyday life is celebrated in beautifully imagined accompaniments which emphasise the folksy figurations interpreted by both indigenous as well as other European instruments. What makes this seem so easy is the remarkable arrangements that feature extraordinarily beautiful melodies woven into musical brocades using all of the tone colours that explode in the local rhythms of the music.

Each of the musicians and their guests make distinctive contributions to the music, which is not simply original as in freshly composed, but also unusual and full of surprise. Words are chosen for their spirited meaning and the singing is distinctively sardonic while also being playful and meaningful. Example: “The Pert Breast” which is loaded with sensuous double-entendre while at the same time being completely free of malice. Each of the musicians make distinctive contributions to the music, which makes important advances in melody and harmony from the band’s debut album, Grippy Grappa.

The folksy Cypriot repertoire is delightfully twisted yet it is rich in local allusion. The group is wonderfully assisted by two vocalists Symis Shukuroglou, who leads the way on “Mandra” and Efthymia Alphas who is the lead vocalist on “A Wee One”. Both are wonderful additions to the group’s efforts. But it is most definitely the trio of musicians comprising the group that must have the lion’s share of the credit for their superb music, wonderfully arranged and most expertly and lyrically executed.

Track List: Gongs; The Bland; The Suitcase; Sikoses; A Beating; That’s What the Kitten Wants; Black-Eyed Girl; Dissonant Judgement; The Popayes; Mandra; The Pert Breast; Good Tidings; A Wee One.