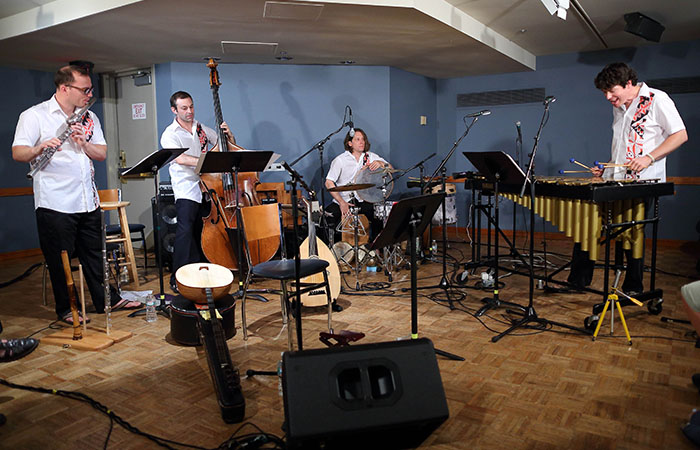 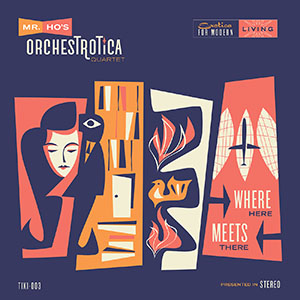 It seems almost trite to talk of where cultures collide, when it comes to the music of Brian O’Neill, or Mr. Ho—as he likes to sometimes call himself. The musical big bang theory is centuries old and that would necessarily make that epithet old hat. The question that arises when Mr. O’Neill makes his music—certainly on this recording, Where Here Meets There–calls to mind that age-old conundrum: that of the timelessness of music; it is tempting to suggest some music, but that would be inappropriate. Perhaps great music is appropriate because all great music—be it in classical idioms and forms, blues and jazz idioms and forms; even the popular music from the great American songbook—is timeless and almost accidental. Johann Sebastian Bach, Ludwig van Beethoven, Johannes Brahms, Wolfgang Amadeus Mozart and Bela Bartok did not set out to compose great music; their music became great despite its frailties and then too the great composers were never sure of its greatness sometimes long after their deaths. This accounts for why Charlie Parker and Thelonious Monk and Herbie Nichols, and Charles Mingus did not conceive of “great and timeless music”; it became so after the fact. It is to this realm that Brian O’Neill often brings Mr. Ho’s Orchestrotica. That is he gathers his melodies and charts his harmonies in to the nebulous realm where the music of different times resides, becoming timeless and great, and in doing so, makes timeless music himself.

What an extraordinary name for a recording, but so appropriate for the music that Brian O’Neill makes. It is music that nestles in the cradle of timelessness. It is music that traverses the cultural anthropology of continents—from Africa and Asia, to Europe and the Americas. The musical topography of the world comes to rest on his percussion colourings, whether it is the vibraphone, bass cajón; the bells and whistles; and the effects that he creates with found percussion and other handmade instruments. The glue of it all is held together by the vibraphone as well as the bass flute. Soli on both instruments are sparingly used, but it is the sum of these parts that make the whole of the music so outstanding. Mr. O’Neill understands orchestration as well as he understands composition. Thus he can make a trio sound symphonic—albeit the fact that he may be using the technique of overdubbing to enhance some of the music contained in this recording. Still it is the nature of the compositions that is special. Mr. O’Neill’s grasp of Brasilian polyrhythms is particularly outstanding and this is wonderfully displayed on “Maracatune For Chalco,” incidentally also an apt vehicle for flutist, who plays with ethereal beauty, with echoes of the rustling of leaves in the Amazon, while the bassist Jason Davis—splendid throughout—and the percussion rings true (especially when played on the pandeiro). This after it seemed the Orchestrotica could not top “Chiseling Music” a wonderful chart to start off the musical sojourn.

“Would You Like Bongos With That Fugue” is a composition cast in the timeless vein of the classics. First using the form of the fugue, Mr. O’Neill proceeds to build the chart with exquisite counterpoint; then play his brief solo as he would a cadenza in a veritable suite that is at once European in its polyphony and African in its polyrhythms. The music here is quite transcendental and makes a wonderful introduction to the second set of the suite in which Mr. O’Neill proceeds to recast some of the great music of past eras. The melding together of Manuel de Falla with Chano Pozo and Dizzy Gillespie is gloriously seamless on “Ritual Mallet Dance”. Once again, the criss-crossing harmonies of Mr. O’Neill and Geni Skendo are unusually beautiful. The Moorish sounds of percussion draws the flute in as if seducing the instrument into an interminable dance, which calls to mind the birth of jazz, when (African-oriented) percussion captivated the brass and woodwind instruments associated with European chamber and orchestral music. As the Orchestrotica moves on, Mr. O’Neill begins to tap into what could easily be identified as the world’s hotspots of musical confluence: Brasil (in “Prelude For Piano I”); Moorish North Africa, which in turn boomerangs into New York and its continually evolving avant-garde scene (“Prelude For Piano II) in an exquisitely-crafted vibraphone solo that morphs into an Oriental sequence by George Gershwin that in turn dissolves into a enharmonic codified section that brings the middle part of this suite to a close. The eclectic climax to the suite also leans heavily on Mr. Gershwin, whose worldly-wise influences extraordinarily forward-thinking. Mr. O’Neill’s use of the Middle-Eastern oud in the final part of his superb record is truly inspired and puts a new spin on Cal Tjader, thereby not only acknowledging the contribution made by the West-Coast vibraphonist, but also acknowledging his (Brian O’Neill’s) own musical lineage. In making all of this music in a seamless manner, Mr. O’Neill has created what could easily be described as a timeless magnum opus.

Gordon Grdina: The Poetics of Music