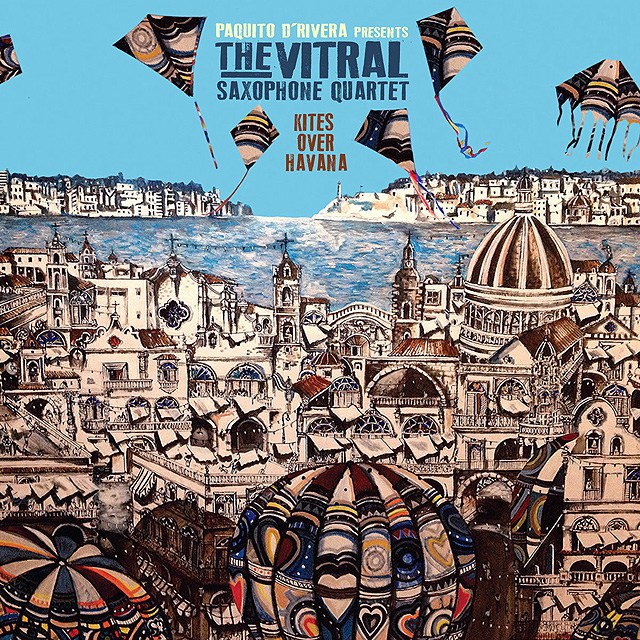 The saxophonist’s fascination in his instrument and with counterpoint is much older than the one expressed by Charlie Parker when he invented a wholly new melodic idiom in the course of pioneering bebop and professing a fantasy about playing Bach, Brahms and Bartók. It goes back more than 200 years to Adolphe Sax who invented the instrument itself, designing a set with different keys for orchestral performance, thus making it possible contrapuntal music as well as music for soloists. In recent years we have heard Grover Washington Jr. record a whole album of arias. Branford Marsalis did so too. The Colorado Saxophone Quartet recorded its Preludes and Fugues composed and arranged by Michael Pagán (Tapestry, 2010). Yosvany Terry and his Bohemian Trio also released an iconic album Okónkolo (Innova Recordings, 2017).

Kites Over Havana by The Vitral Saxophone Quartet is the most recent and fascinating recording of contrapuntal music. Its music comprises the “Cuarteto Latinoamericano Para Saxofones” a fantasy tracing the passage of music from Spain to its erstwhile colonies in South America, while traipsing through Brasil. The fascinating repertoire is beautifully through-composed but is also quintessentially expressive and one which courts an inextricable relationship with jazz and is therefore music played with unrestrained swing. Roman Filiú, the lone soloist from The Vitral Saxophone Quartet tells wonderful ‘stories’ as he breaks formation in “Zapateo Orientale” and “La Nana”, the former is based on a dance rhythm of Spanish origin, now incorporated in the traditional music of Latin America.

“Dance” is the key operative word and it is the flavour of much of the music; the music that traverses many regions of South America where culture is still expressed in folk forms. Appropriately enough the repertoire begins with “Wapango”, written in a particularly beautiful vernacular that somehow throws the spotlight on Raul Cordies and his baritone saxophone as does the subsequent piece, “Afro”. This latter piece has the lead voice change from alto saxophone at times reaching for the mighty wail of the soprano. The introduction of Yosvany Terry and his shekere gives this piece added swing as it recalls the African origin of all things rhythmic and gives rise to a dissonant crescendo before stating the melody again. Paquito D’Rivera’s clarinet brings much energy to the performance.

The two lullabies, “Berceuse” and “Berceuse Campesina”, despite the gentle nature of the music they also swing the hardest. And when Dr. Adonis Gonzalez is added on piano, especially on “Tan Tango” the reeds, emboldened by the addition of Yosvany Terry on tenor saxophone, are played in unison often giving the glorious impression that a great pipe organ is playing softly in the background, ushering the melody played by Gonzalez heavenward. The palette of tone colours of the saxophone is greatly expanded through the quartet and the subsequent pieces as much due to the range of the instrument as it is by the vertical writing for instruments that keep switching position frequently from the top of the harmonic tower to the bottom, making for utterly beautiful and memorable music.

Bossacucanova Presents: The Best Of…