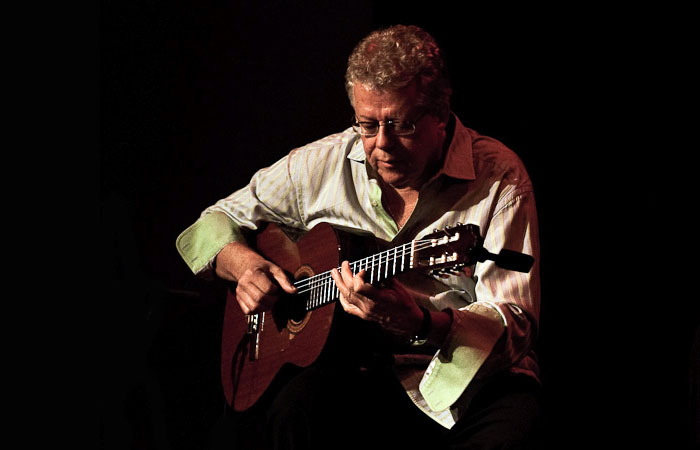 Solo instrumental performances can be solitary pursuits, but not for Romero Lubambo and here is why. More than most guitarists, Mr. Lubambo has an uncanny knack of being able to sound as if his performance were a sort of chamber orchestra. And he makes this appear so easy. His ability to play multiple lines: a melodic line, several harmonic lines—many of them staggering contrapuntal ones—and a bass line which doubles as the equivalent of a baritone voice in a choral element of this imaginary chamber orchestra. Part of this is because he is Brasilian and Brasilian guitarists are simply the most gifted instrumentalists/guitarists; just as Cubans are pianists and Puerto Ricans are horn players. Now with Romero Lubambo there is something else: he is an unbridled genius at his instrument and here being Brasilian, although it plays a role in this fact, it is only a part of it. Mr. Lubambo has a world-view that enables him to sound exquisite whether he is playing with Herbie Mann, or playing second voice to Luciana Souza; or bringing a rare delight to Claudio Roditi or to Dave Douglas and a host of other luminaries who have all attested to the fact that Mr. Lubambo contributes the guitar/percussion near-orchestra by being seamlessly, the steady rhythm they seek, the bass, and the grace notes all of which are provided by Mr. Lubambo’s fingering.

Expect nothing less from Só—Brasilian Essence the solo sojourn that Mr. Lubambo undertakes shortly after his historic duets with Luciana Souza for the same imprint. There is something of the maestro Laurindo Almeida in his playing on the album. His playing is inspired and informed by shimmering glissandos; sudden rushes of arpeggios that race up and down the fret board of his burnished guitar, but most of all there are these harmonic lines angled against the melody of his charts that run as wide arcs and gentle ellipses. And then there are his changes that sound as if this guitar master is leaping from one musical plane to another like a sprite; a spriggan only not a Celtic one but a Brasilian one from one of the many wishing wells in that country; something he brought to New York and with which he continues to charm musicians and listeners alike. His mesmerising performances on “Aquarela Do Brasil,” “Brigas Nunca Mais,” “Paquito in Bremen” and the classic “Insensatez”, where he is everything described in the glories of the chamber orchestra.

On Só—Brasilian Essence, Romero Lubambo does something more. He sings. While this is not the voice of Mr. Sinatra from that charmed session that put the Chairman of the Board together with Antonio Carlos Jobim, it is a performance reminiscent of many of the songs that Joao Gilberto sang slightly off key; or that Vinicius de Moraes recited and sang with Toquinho. This is to say that Mr. Lubambo sang off-key in a charming and memorable manner. His “Coisa Mais Linda” is so reminiscent of Mr. Gilberto’s “Garota do Ipanema” that it is utterly and unforgettably beautiful. Of course, in the end Mr. Lubambo has made a guitar album and he has captured the essence of his gorgeous instrument not only in brilliant technical fashion, but also in all its essential spirituality. And this only a true master of the instrument can do.

In 1985, Romero Lubambo came to the United States, and brought with him a new sound in Brazilian jazz guitar. Romero’s guitar playing unites the styles and rhythms of his native Brazilian musical heritage with his fluency in the American jazz tradition to form a distinctive new sound. From the cool, sophisticated rhythms of his native Brazil to hard bop, Romero is a guitarist who’s comfortable in any musical setting. He is an uncommonly gifted soloist and musical improviser with a steady stream of unpredictably creative musical thoughts and the virtuosity to deliver them ever so tastefully.

He has also established himself as a composer and performer on his own critically acclaimed recording projects as well as on those of Trio Da Paz, a Brazilian jazz trio Lubambo formed with Nilson Matta and Duduka da Fonseca. Romero Lubambo is considered by critics to be “the best practitioner of his craft in the world today… the guitarist’s facility, creativity and energy are in a class all their own.