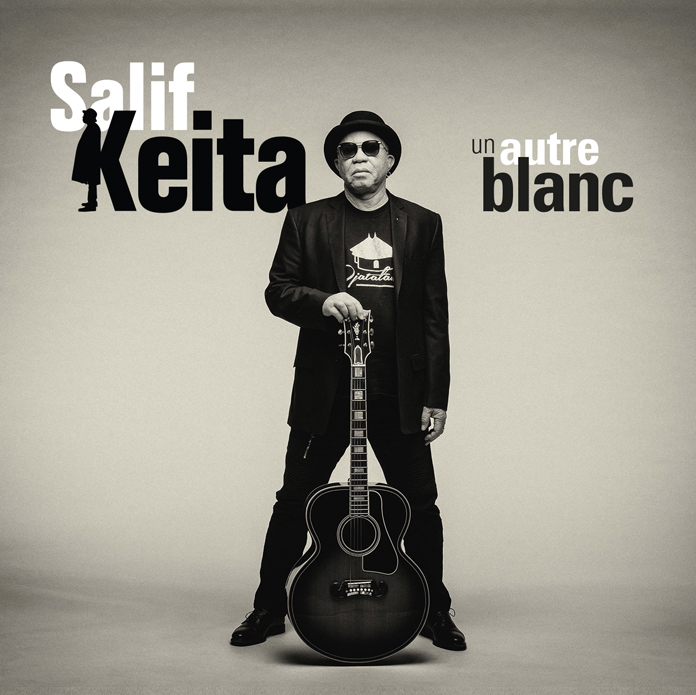 Salif Keita is a griot who has a royal bloodline and has descended from one of the great Mandinka people of Mali. Albinism not only threatened to prevent him from performing in the role which he was born to play, but also endangered his life, resulted in his being banished from the kingdom in Mali which he ought to have inherited… but extraordinary fortitude is probably how he has not only prevailed but become one of the greatest living griots in the Mandinka tradition, a vocal critic of the kind of discrimination he was subjected to and – because of his high and lonesome falsetto voice – one of the most iconic vocalists and musicians to come out of Africa in modern times. His bittersweet farewell – for he is retiring from active performance – is an appropriately and ironically entitled recording: Un autre blanc.

The Paris-based superstar has gathered together musicians who have both transitioned and remained within his seemingly interminable orbit and has created a wondrous collection of music sung in the Mandé language. Fittingly he is also joined by some of the most enduring names in African music – from Angelique Kidjo and Alpha Blondy – to modern master-musicians in the griot tradition such as Mamadou Diabate, Aminata Dante and Mory Kante, as well as superstars who have crossed over into Jazz, such as Paco Sery. The message of his music is a radical one, not always strident although among his heroes was Patrice Lumumba and Samora Machel. The clamorous messaging is tempered by the concept of peaceful ubuntu that was ceremoniously espoused during the Truth and Reconciliation hearing convened by Bishop Desmond Tutu when Nelson Mandela won freedom for South Africa. But he cannot resist expressing the pain of the bigotry and ignorance that drove him away from home.

And so, while the programme is replete with songs such as “Were Were” and “Tonton” that advocate for an alternative to tribalism and the old way of Africa, there is much music about the pain of the people that struggle in the countries of the continent. We hear in this music what sounds like heraldic choirs formed by the background singers – perhaps the word “background” does them a disservice – as they form with Mr Keita and the other lead vocalists an important call-and-response partnership and the lyricism with which they both describe pain and how it’s overcome in a heady mix of ebullience and the story of African blues and redemption is edifying. “Bah Poulo” is a wonderful example of this.

Amidst the profound nature of songs that examine social issues are also some that are just plain romantic. These feature stories set in the past and present and although the romance of the vocals drives this music the message of freedom and triumph of the human spirit is never very far away. The finest of these is “Tiranké” and “Lerou Lerou” – both rueful melodies sung in the inimitable manner that only Mr Keita could perform. It is music like this and the rest of the repertoire on this disc that will make Mr Keita’s legions of fans all across the world hope that they have not seen or heard the last of this great artist.

Idan Raichel: And If You Will Come To Me