Released in 2015, the same year that Mamblue made its appearance this two-disc set World Music 5 is every bit as spectacular. In fact in many respects it might just be a tad better. There is much more Ed Calle to love and the album also features the great Uruguayan violinist Federico Britos, heard here playing in less traditional modes and rhythms and in a more jazz oriented style. The disc also features the Negronis, José and Nomar and the Negroni’s trio bassist Josh Allen. The repertoire is quite eclectic but that is par for the course for Calle who can inhibit any realm of music. The saxophonist may have a penchant for Latin Jazz, as he has proved on many occasions, however time and again, especially on this album, Calle blurs the artificial lines that exist between the so-called genres that exist today and it’s not just on charts such as My Favourite Things, Thinking of You and Night and Day, you can hear that on Granada, America and many other tracks too. 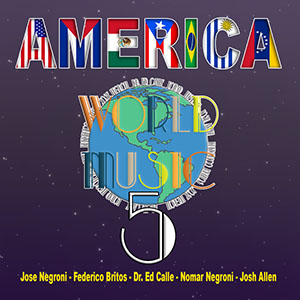 The same can be said of the great Federico Britos. Here is a violinist who soars like a condor, high and lonesome with vaunted arpeggios, mighty glissandos and accelerated double stops. Britos is also a violinist who accentuates the beauty and simplicity of melody with his silken lines that he weaves into gossamer-like sheets of sound; harmonies that are sewn into the fabric of the song to make it the most memorable thing that you will have ever heard, no matter who or what you might have heard recently. Listen to Um A Zero, Pixinguinha’s famous choro, which gets the real treatment by both Calle and Britos. You might have thought that you had heard everything before you listen to this song but after it you are likely to wonder if you did. The Negroni family of José and Nomar bring a certain something to this project as well. Jose Negroni’s playing can be delicate and emphatic all at once and Nomar is a drummer known for dropping mighty depth bombs as much as he is a sensitive melodist who finds his way into the heart of a song.

World Music 5 is a mighty record that has been somewhat submerged under the attention that Mamblue has been getting. On the latter album, Calle proved himself as a poetic arranger who could seek and find the exact beauty of any instrument’s timbre. On this album he gets to make the timbre of his instrument sing and register along with the tone colours that he brings to the various reeds and woodwinds that he plays. His is broad palette and he brings out a whole range of saxophones, clarinet and flute on this record. The two discs have excellent fare of each one. Disc one boasts a wonderful version of My Favourite Things which has the power and creativity reminiscent of John Coltrane. On disc two Calle pays tribute to his Spanish antecedents on Granada. All of the players raise the spirit of Duke Ellington on Juan Tizol’s classic Caravan. This album will grab you like few albums do and is too beguiling and memorable to resist.

Born in Caracas, Venezuela to Spanish parents – father Joaquin Calle from Madrid and mother Maria Begoña Calle from Barcelona – it was obvious from the very start that Ed was a gifted musician whose energetic, passionate, and distinct sound captured the attention of audiences and musicians alike. His teachers and schoolmates often suggested that Calle’s sound is actually part of his DNA. Now, Calle can be heard on more than 1,200 albums, almost 9,000 singles, and countless movie and television soundtracks both as a soloist, sideman, composer, arranger, conductor, and producer. Read more…