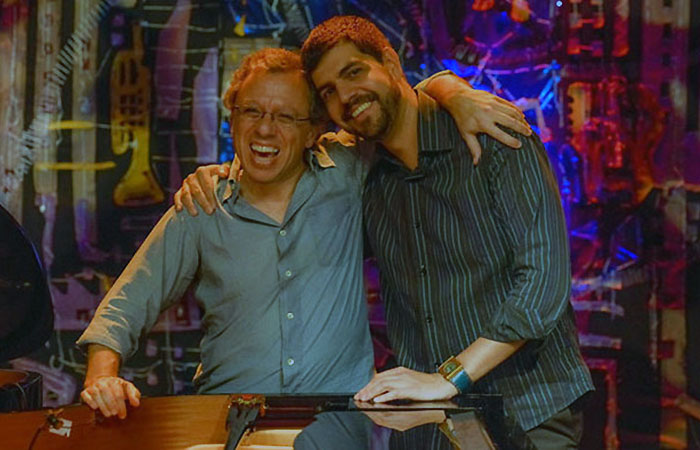 André Mehmari represents a new generation of musicians and pianists, who, like Benjamin Taubkin and Clarice Assad, is causing a sensation all over Brasil and in many parts of the world. His genius and musicianship is quite unmatched even across instruments. This comes from a conception of music that weaves in and out of various metaphors and idioms in music; he plays with rhythmic instinct that would suggest he dreams in meter and tempi; and his gift for melodicism and advanced harmonics make him a rarity among all pianists—whether classical or jazz or in the Afro-Brasilian realm. He has delighted the world with music in many settings: vocal, solo and ensemble—nothing classical has been recorded. However this duet with the brilliant Portuguese pianist Mário Laginha, on the live album Ao Vivo no Auditório Ibirapuera comes close to the feeling of sitting in on a classical recital; an astonishing lesson in virtuosity on the part of both pianists, who are at their expressive best as they employ subtle dynamics to make one piece after the other to die for. On this recording Mário Laginha is no slouch either. Once influenced by Keith Jarrett, Mr. Laginha is now a singular voice on the piano who seems to inhabit the third and the fourth dimensions of music at once. The ethereal beauty of his playing suggests a spectral nature in his music. Compositionally sound, Mário Laginha writes and plays his music like a clever sleuth who provides exquisite clues to the whereabouts of long loping lines; who dives into a world that is dangerously exciting breathlessly coming up for air once and awhile to dazzle his listeners with music that only moments ago might have seemed quite impossible. Mr. Laginha is known for his collaborations with the fine chanteuse, Maria João and his famed four-handed piano sessions with Bernardo Sassetti and Pedro Burmester have been heralded as impossibly brilliant. This new piano duet with André Mehmari is just as equally so.

Among the highlights of the music on this album “Corale,” a piece of breathtaking beauty swoops down on the sensibilities like a great soaring albatross come to gladden the heart. And then there is “Sunt Lachrimae,” an otherworldly piece so quintessentially beautiful that it makes the hair on the nape of the neck stand up in awe. But not all of the music is ethereally beautiful. Some of it is earthy and can be tasted just for fun. “The Song is You” and “Um Choro Feliz” are racy, witty pieces filled, frevo and other Brasilian forms and rhythms with spectacular inversions; the former, a classic American standard has been turned upside down as the pianist cut loose in the idiomatic rhythm of a choro. The latter is, of course, a choro that has all of the signature of greatness not only as a composition, but also with the devastatingly beautiful melismas that inform the virtuosity of the two pianists.

Andre Mehmari is considered one of the most talented young musicians of his native Brazil. His activities as pianist, composer, arranger and instrumentalist are highly regarded both in popular and classical music. As his compositions and arrangements have been performed by important Brazilian orchestras (OSESP) and chamber ensembles (São Paulo String Quartet), his career in jazz and Brazilian popular music has also attained wide attention as he has gained wide recognition for his music in jazz festivals and concerts. Born in 1977 in Niteroi (RJ), he began to study music with his mother at the age of five, and completed an organ course in the Conservatory of Ribeirao Preto (SP). At the age of ten, having been self-taught in jazz improvisation, he wrote his first compositions. Read more…