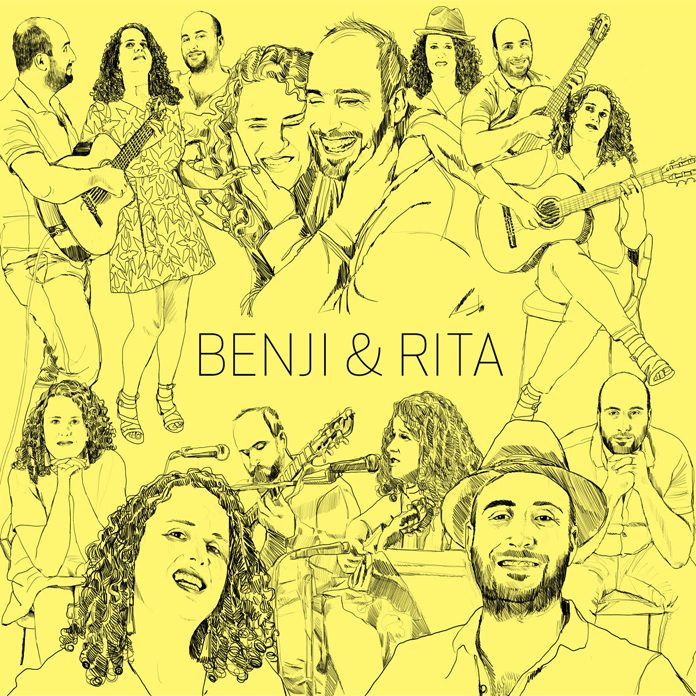 This recording by Benji Kaplan and Rita Figueiredo is a benchmark recording in many more ways than one. The biggest deal may be the fact that – more than anything else – it provides incontrovertible evidence that Benji Kaplan is a bona-fide Brasileiro. As an artist Mr Kaplan has become completely subsumed by the Brasilian ethos; something that has enabled him to “go native” in every form and metaphor of his music – both as a guitarist and a composer. But equally important is the fact that this time he has not done it alone. Rather he has been accompanied – fulsomely speaking – by his partner in music and life: Rita Figueiredo, an animator, graphic artist and (we now know) an accomplished storyteller and lyricist as well. In fact it is impossible to overstate how completely Miss Figueiredo’s poignant lyrics have affected this album, somewhat diffidently entitled just Benji & Rita.

If in previous albums such as Chorando Sete Cores and Uai Sô have begun the mighty task of shaping Mr Kaplan’s voice as a guitarist and songwriter, this album Benji & Rita has brought resolution and completed the process like the dénouement in an epic Homeric journey into something bottomless and relatively unknown; something that Mr Kaplan seems to have completed with the not insignificant guiding light of Miss Figueiredo. For her part the lyricist and vocalist has brought something dynamic to Mr Kaplan’s music. In many ways her lyrics have also resulted in bringing a sense of epic drama to the music, which might have always been seen as the work of an “expatriate Brasilian” in the best sense of the term. Moreover, as Miss Figueiredo quite literally “cries” (rather than sing) her songs, the true voice of chorinho adds the lagrima dimension to this repertoire.

One has always had a sense that Mr Kaplan’s music might contain broad hints of the music of Brasilian masters such as Guinga in terms of their rootedness to both the Brasilian tradition of the violão. However, with the repertoire contained here, there is also a greater sense that this music now rises from the very urban dust of a Carioca and Paulista and also the soil of Brasilian sertão. Songs such as “São Francisco é brasileiro” and “Piocerá” are awash with the lyricism and the poetry of everything Brasilian. In “Santa Efigênia” (and more completely) in “Lundu dos orixás” Miss Figueiredo and Mr Kaplan reach the heart and soul of the Afro-Brasilian paradigm. In these examples – and indeed throughout this vivid and exciting repertoire we become witness to music of rare beauty as the artists illuminate the lyricism and infectious rhythms of their writing.

Indeed Miss Figueiredo’s voice melts into Mr Kaplan’s guitar in a spectacle associated with the tradition of the finest Brasilian duets of voice and violão. Clearly the fact that Mr Kaplan’s music has been now cast with Miss Figueiredo’s authentic Brasilian voice is an enormous step towards success in his work that depends so much on idiomatic delivery, not just in pronunciation, but also in poetics and phrasing and in a musical setting that prioritises a natural declamation, based on (Brasilian) Portuguese speech patterns. Add to all of this the masterful arrangements that expand the music’s tonal palette enormously and the interiorised performances by a splendid group of musicians and you have the best case for Benji & Rita; a record that sparkles from end to end.