By now it is somewhat apocryphal to hear that “you have never heard something like this”. This is especially abhorrent when you add the word “fusion” to that and the cherry on the cake is surely when the music is a mix of Indian and Mediterranean. Now consider the group: Bolo, a trio of the most accomplished ethnomusicologists: drummer Surya Prakasha, who has spent a great deal of time in West Africa and India, immersing himself in the lives of West African griots, learning from them and from Indian Hindustani and Carnatic scholars and musicians; Evan Fraser, who also made the journey to West Africa and is a master on the kamale n’goni, the West African lute and Eliyahu Sills, a multi-instrumentalist who paid his dues in Turkey, mastering the nai and then in India doing the same with the bansuri and also plays oud and double bass. You can be damn sure that nothing this trio would do is ordinary. 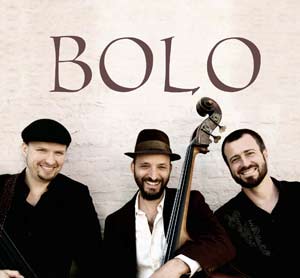 And you would be absolutely right. Bolo has just released their first eponymously entitled record and what a masterpiece it is. This seductively imaginative CD excels in every facet of the musicians’ art. It is the enormous personalities of the three musicians and their tales that predominate. They seem to have lived for the love and danger of their art and it shows in the inflamed passions and in the wealth of nuance culled from the topography of this art. What impressed most about the individual elements of Bolo’s musicianship is not simply their mastery of ethnic instruments but the ability of each musician to make the listener aware of the emotional import of each phrase played on their instruments – spontaneously, as though they only just considered playing the instruments that way. Such is the ability of each musician to make his instrument work from his soul outward.

This is remarkable – even more so – as the instruments come from such disparate cultures and musics that it is hard to even imagine them together. But the musicians of Bolo make this work in a truly special way. They are able to find new tone colour in magical compositions. In their hands music becomes like a living thing; one senses that each performance will have its own individual character. Certainly as the music progresses from “Xangô” propitiation to the Orishas of the Afro-Cuban diaspora through Jai Uttal’s vocal melody, “Sunshine” down to Ali Farka Touré’s celebrated “Mahini Nei” the listener will be stopped in his tracks and left gasping for breath at the beauty of each track. It becomes clear by the end of this CD that the trio of musicians value musical character over sheer brilliance, showing also a strong feeling for drama.

I am most impressed by the fact that these musicians also challenge traditional ways of playing traditional instruments. For instance, while soloing they make little use of familiar embellishments that are normally associated with the instruments themselves. However, in balance, the instruments never sound outlandish and so far away from their cultural environment that they would sound odd. This comes from virtuosity that cannot be learned, but is something innate in the musicians’ character. This is why they are able to play these difficult instruments immaculately and make music that is powerfully expressive. Bolo is a group that plays music that deserves to be heard on a wider stage and this is sure to happen sooner rather than later.

BOLO is a dynamic ensemble with Surya Prakasha (Lavay Smith) on drumset, vocals and harmonium, Eliyahu Sills (The Qadim Ensemble) on ney & bansuri flutes, oud, and upright bass, and Evan Fraser (Dirtwire) on West African kamale ngoni (harp), kalimba, and percussion. With a fresh improvisational approach, the group creates music that will move, uplift and transport. Featuring African sourced grooves with sacred folk songs, African and Indian melodies, BOLO speaks to the heart in a musical language that bridges continents and unites us all. Read more…