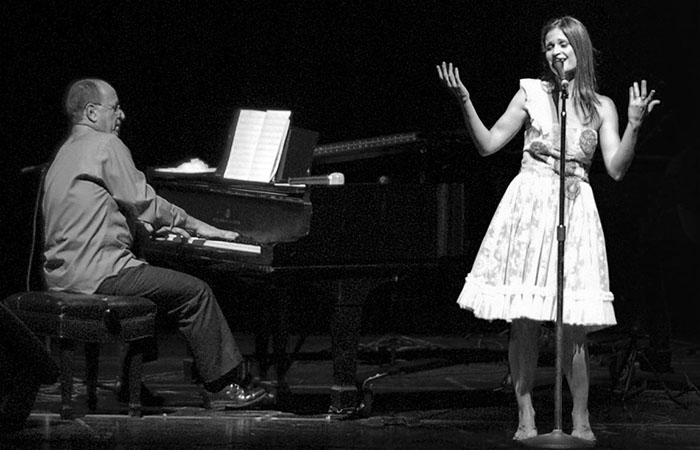 The concept of a kind of Rio de Janeiro/ New York mash-up—Copa Village—as it is called might not be anything new. Many years ago Antonio Carlos Jobim first brought his iconic song to New York studios and later once again to Carnegie Hall. But here lies the rub. Pianist Antonio Adolfo and his daughter, the ever wonderful Carol Saboya have not only brought the song, but a whole album of exquisite repertoire to from Rio (and Sao Paulo) to New York. There to team up with the harmonica wunderkind, Hendrik Meurkens. And that is what makes this album all the more memorable. This is justifiably so with this super constellation of stellar musicians who grace the recording. The music devolves in a kind of three–way in which the shimmering voice of Ms. Saboya is reflected, bouncing off the dazzling melodic inventions of Antonio Adolfo and Hendrik Meurkens. With her bright tone and brilliant technique, Carol Saboya is an ideal interpreter of the sparkling, sensuous charts. She is equally adept in the gentle and interminable unraveling of songs such as “Agua de Beber” and “Pois é”. In the latter she is joined by Mr. Meurkens who plays with unhurried elegance on his chromatic harmonica, pursuing Ms. Saboya, “singing” in his own singular way. It is easy to say that everything on the disc gives clear evidence of the most scrupulous preparation of the music in a constant search for the intrinsic features of each piece. Not only that, but the recorded sound is magically clear: every detail is heard. That is, of course partly a function of the singing, which is astonishingly clean and sharply focussed. All of this is swathed in the energy and musicianship of pianist Antonio Adolfo and multi-instrumentalist Hendrik Meurkens, who breathe life into each piece.

The close partnership between Antonio Adolfo and his daughter, Carol Saboya is immediately heard in “Visão”. This is perhaps the most magical evocation of Rio and the rippling flights of fantasy that Mr. Meurkens contributes with his harmonica conjure up the rhythmic lapping of the surf and the sea. Throughout of course, Hendrik Meurkens plays with keen edged tenor, grace of phrase and sensitivity to mood and verbal nuance. This makes for an ideal bed for Ms. Saboya to lay down her vocalise, while Antonio Adolfo’s left hand sings in affectionate colloquy with his daughter’s voice. None of this intense, achingly beautiful music would be anything without the brilliance of its other contributing musicians. They provide a matchless fullness and character to harmony and rhythm.

In its fine balance of subtlety and devastating emotional directness, this is certainly a recording of unusual glamour and class. Its attractions are enhanced of course by Ms. Saboya, who plays not only off the lyric, but also the melted beauty of the instrumentation. This is why the record ends up being so special; a tribute largely to the music of Antonio Carlos Jobim, graced here by the wonderful musicality of Ms. Saboya, backed by the virtuosity and emotional fullness of Antonio Adolfo and Hendrik Meurkens.