Debussy’s two sets of Images (1905 and 1907) are musical homages to pure sensation, conjuring the sound of bells through leaves, sunlight reflected from the scales of goldfish scales, and a multitude of other transient moments. The opening piece “Reflets de l’eau”, straight away establishes Debussy’s unique understanding of the keyboard’s potential, translating the rhythms of water into hypnotic, refreshing music that’s as vividly pictorial as anything Liszt could have created. The two books of Préludes (1910 and 1913) are the last of his descriptive piano works. Titles such as “La cathédrale engloutie” indicate an affinity with the allusive world of Images, while others such as “La danse de Puck” are indicative of a more outgoing element to the Préludes . They might be slightly more accessible than the Images (though bear in mind that Debussy did not intend all 24 to be heard in one session), but if anything they are technically more demanding – only the Études require more of the pianist. 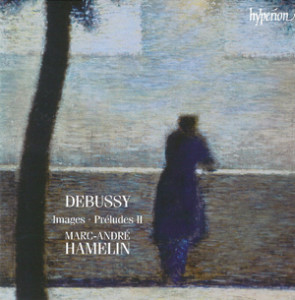 Michelangeli’s performances of the Images and the Préludes are astonishing, creating an ever-shifting and constantly fascinating world of sound. These are among the finest accounts of Debussy recordings ever made. His Epicurean style, with its marvelous gradations of dynamics and timbre, are perfectly suited to Debussy’s most macroscopic piano music. However, Michelangeli is too preoccupied with seductive sonorities at the expense of musical depth, and his playing of these pieces is sometimes idiosyncratic. Marc-André Hamelin performances are vivid and characterful at every level, a wake-up call to an alternative point of view, to a more familiar misty-eyed evasion. A key to this approach – one of a very personal conviction – comes in Marc-André Hamelin’s fine accompanying essay, where he speaks of “a gently delineated haze… along with a clarity of vision (the two are not mutually exclusive)” becoming hallmarks of style.

Clarity of vision certainly; and if there are times when he can sound more forceful than subtle Images (Book II/No. 2), his conjuring of a bleak rather than opalescent poetic world is superbly commanding and authoritative. Even the central section of “La terrasse des audiences du clair de lune” cannot tempt him away from a clear-sighted even remorseless vision. In “Ondine” the piece is more animé than moderato and in “Canope” a pianissimo subito direction cannot lure him into whispered confidences. But what eerie desolation he achieves in the final descending autumnal swirl of “Les tierces alternées” and what enviable poise in the following “Feux d’artifice”. His “Hommage à S. Pickwick Esq. P.P.M.P.C” is spikier than affectionate yet entirely convincing in its own entirely individual terms. These recordings are absolutely brilliant. We are blessed indeed at having such a thrilling and audacious artist in our midst.

Marc-André Hamelin begins the 2014/15 season with a round of recitals in Aspen, New York, Verbier, La Roque d’Anthéron, the Duszniki Festival in Poland, Orford, and in the Montreal Symphony’s Virée Classique. There, he also performs Mozart’s Piano Concerto, No. 27, K. 595, with Kent Nagano and the Montreal Symphony, followed by performances of Beethoven’s Emperor Cto. at the Hollywood Bowl with Stéphane Denève and the Los Angeles Philharmonic. Read more…