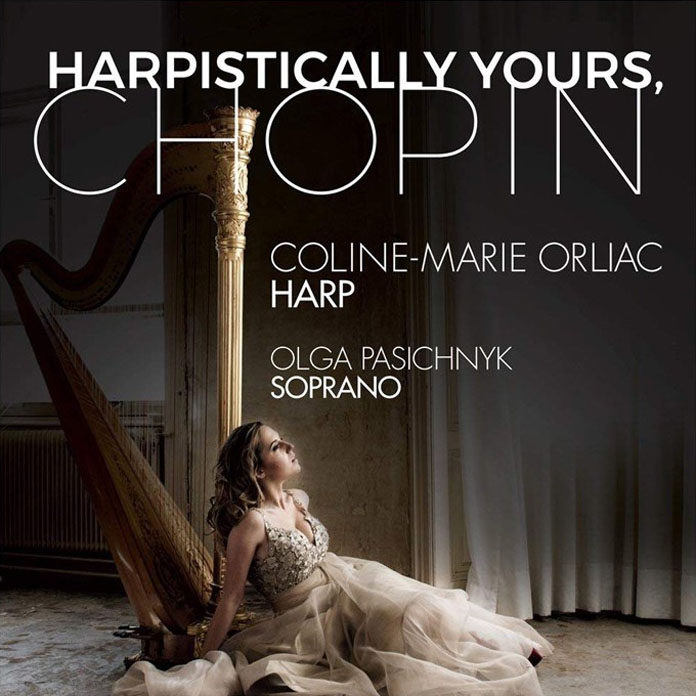 The harp – great ancestor of this pedal harp played so magically here on Harpistically Yours, Chopin by Coline-Marie Orliac – is an instrument that might be traced back to the earliest, Biblical times when Jubal, a descendant of Cain was credited with being “the father of all who play stringed instruments and pipes” (Gen 4:21) and was played by the great King David as he composed and sung the first Psalms. Of course that instrument was continuously refined first by the Sumerians and later elsewhere, importantly in medieval times and down the ages until music was adorned by modern harps, that varying in techniques used to extend the range and chromaticism, enabled players such as the ineffably glorious Miss Orliac to adjusting a string’s note mid-performance with levers or pedals which modify the pitch.

It was probably only a matter of time before a musician of immense ability no less such as Miss Orliac, to make the proverbial philosophical leap, to bravely imagine what it would be like for Frédéric Chopin to have written for her instrument. The result is Harpistically Yours, which features twelve Chopin works arranged for the harp. The album also includes seven Lieder on which Miss Orliac is joined by the soprano Olga Pasichnyk. Alone or as an accompanist, Miss Orliac achieves what might seem unimaginable, which is to have successfully adapted Chopin’s highly expressive and emotional miniatures to an instrument he could not have imagined would sound as expressive as his beloved piano.

The absolute perfection of this programme is further enhanced by the fact that Miss Orliac seems to have struck a perfect balance of expressing the music in which Chopin’s poetry of feeling has been expertly curated, ornament for ornament in Etude, Ballade, Prelude, Nocturne and Song, as well as inserted her own meltingly tender character into this iconic music. Miss Orliac unfolds the “Etude” into music of real depth and feeling – traversing a wide range of moods, while at the same time exploring its boundaries of the technically possible and harmonically acceptable. Likewise the singing quality of the “Nocturnes” has been derived from the bel canto arias of a Bellini opera, from where Miss Orliac seems to have transformed and extended Chopin’s original into something of great emotional range, with a sense of enormous wistfulness.

The “Ballade” – one of four that Chopin wrote – is performed with extraordinary power, abounding in quite startling contrasts, with moments of lyric tenderness being followed by passages of tumultuous energy. Similarly, the “Prelude” – one of twenty-four that Chopin wrote – is celebrated as a highly concentrated poetic miniature where every note sounds fresh and alive, Miss Orliac’s touch perfectly matching the mood of the piece. In her booklet notes Miss Orliac describes Chopin as “my oxygen” and indeed the music of the Songs seems to breathe their rarefied air, but also anomalously, an air rich in the melodic and harmonic life-giving of her proverbial “oxygen”. Miss Pasichnyk’s voice is a perfect femininely-sinuous foil for the lithe lines of the harp: she is high-sprung and soars unfettered into that glorious realm magnifying the beauty of the music exponentially.