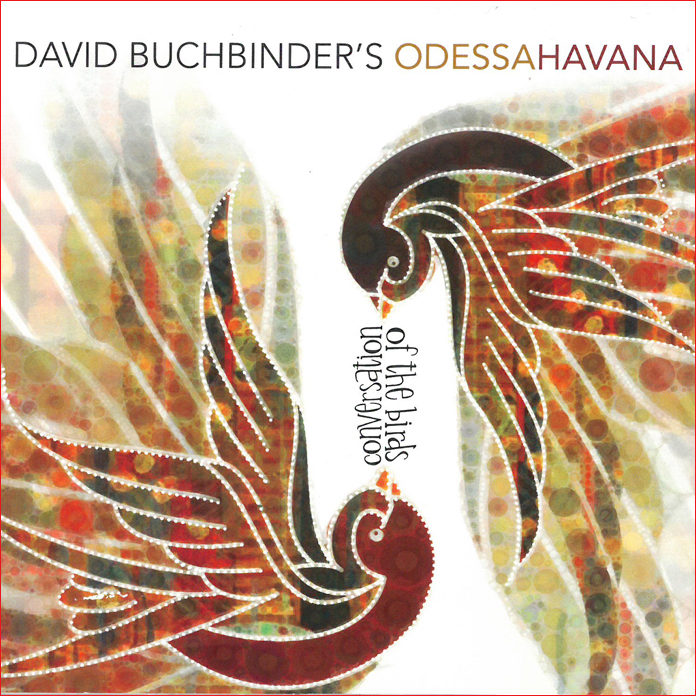 David Buchbinder’s Odessa/Havana’s 2018 release Conversation of the Birds invites the listener to journey back into fabled countryside, gliding mellifluously through a musical topography that transports the listener from Africa through the Mediterranean and beyond. The experience finds one at the heart of a fantastic railway system that links jazz, folk, tango, son, danzón and bolero with middle eastern music and the chamber music style of post-serialist 20th century conservatoire. But to describe it as such is to give the impression of overcooking when in fact the whole project is a masterpiece of subtlety.

David Buchbinder’s take on the lineage of le jazz hot is less than conventional; less so because of the percussive tumbling grooves of Hilario Durán’s piano, that melds in with Mark Kelso’s sparkling drumming that cuts loose and furious along with Joaquin Nuñez Hidalgo’s battery of percussion and Justin Gray’s thundering bass. Lest this seem like a kettle on the boil, about to explode its contents, it is opportune to mention the calming undulations of Maryem Hassan Tollar’s voice and the soothing strains of Aleksandar Gajic’s violin. None of this takes the edge off the music which is a mistura fina; a veritable cultural collision of a myriad musics that pour their collective heart out into Mr Buchbinder’s monumental “Odessa/Havana”, a band of merry men (and women) that brings the world alive in each expression – loud and visible as well as soft and subtle.

Much of the music is instrumental but we are also invited ourselves to be lost in the music of the ineffably beautiful vocals of Maryem Hassan Tollar. Here you can hear a sense of freedom in her voice as she remembers the elegance of the proverbial bridesmaid in “La Galana”, while the elegance of the band sends her spirits soaring during another visit to Iberia in “Bembe Andaluz”.

Throughout the elemental excitement of this music, we feel transported to a rarefied realm all but becoming a part of the vivid soundscape that mixes beauty and danger, and that conjures the locales of the exotic in the keening ululations of Miss Tollar as well as in the drums, and timbales, congas, bongos, chekeré and the darbuka. All of the musicians are completely attuned to David Buchbinder’s unique vision and artistry. Saxophonist John Johnson, Flamenco guitarist Benjamin Barrile and percussionist Joaquin Hidalgo and Raquy Danziger also deliver hugely powerful performances evocative of steamy Cuban and Turkish afternoons as well as freezing Baltic nights on this inspiring musical journey.