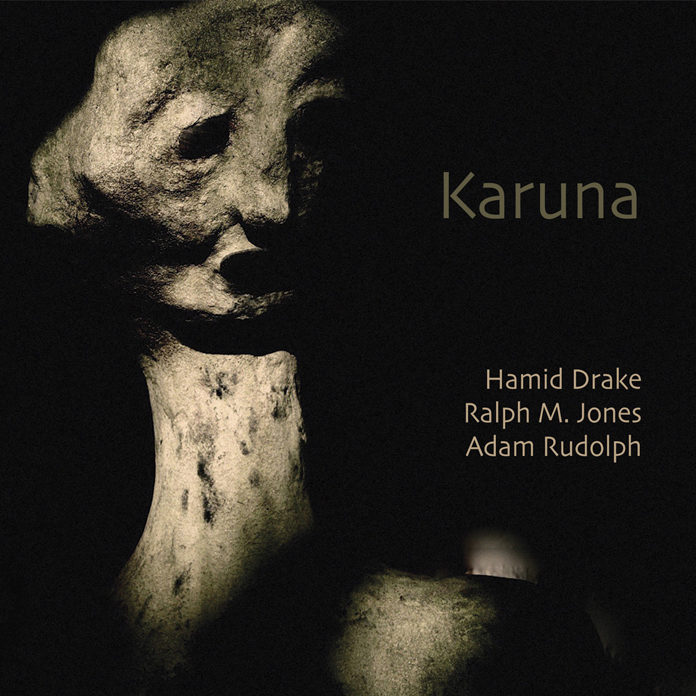 If you have ever listened to the music of any of Hamid Drake, Ralph M. Jones and Adam Rudolph, alone or together, you are almost sure that what drives their every impulse if something that puts them in tune with the melody , harmony and rhythm of life. With Karuna as with all of their recordings in their music serves to reinforce this belief. More importantly with the music of this album which translates to the word “compassion” there a way to also become part of that primordial way of life. Try it, they seem to say, for whether you – in silence, with all but ears wide open – gaze into the elemental inkdark night or bask in the nuclear blast from the corona of the sun on any given day you are hardly likely to escape the fact that the earth is but a teeming symphony, and that your action, and that of every person in this life around you is the playing of your particular part in the music.

It was Yusef Lateef and Don Cherry – each in his own separate way – who first taught the three to open their minds to the extent that this music shows it to be. Using the rhythmic codes of various struck or plucked instruments that provide percussive colouring to communicate their musical dialect, in the case of Mr Drake and Mr Rudolph; or whether it is the projection of the voice through a compendium of reed and woodwind instruments the effect is to unlock the secrets of a preternatural morphological expression which requires no words to communicate human emotions; awakening the nervous system in terms of feelings and responses to what the ear hears and translates to what the inner eye can see. This is the theme, for instance of “Visions of Beyond” in all its profundity and toe-tapping sonic excitement. The same holds true of music such as “Watergoddess Blues” and “Water Voices” – that which no amount of learning can put you in touch with until you give yourself to the magic of the meditative spirit.

This is not the music of the obscure and intellectual even though it may have taken years for Mr Drake, Mr Jones and Mr Rudolph to have come this far in their respective musical journeys. What it does reveal, however, is a strong alignment of the musical mind, theoretical learning and the giving up of themselves to the instruments they play. It is not something new. Charlie Parker always refused to acknowledge that his virtuosic abilities were the result of pure talent. He said “study is absolutely necessary, in all forms…like a good pair of shoes when you put a shine on it, you know” and who also famously declared “You’ve got to learn your instrument. Then, you practice, practice, practice. And then, when you finally get up there on the bandstand, forget all that and just wail.” Miles Davis was also a goldmine of many similar aphorisms, which – not surprisingly- also led him to make numerous magical recordings.

And so it is with Mr Drake, Mr Jones and Mr Rudolph here on Karuna. What a treat it is to hear these incomparable players together in a sparkling show that belies all the combined years of dedicated musicianship. Meandering through this twelve-piece programme on which each musician responds intuitively to the other with not just hands and breath but body and spirit adding worldly tone colours by means of all manner of struck, stroked, plucked and blown instruments. Then suddenly a poem is recited by Mr Jones that puts into context what the sound of life is seemingly all about, in the “Cry of the Bamboo Flute” which closes out this magical performance.