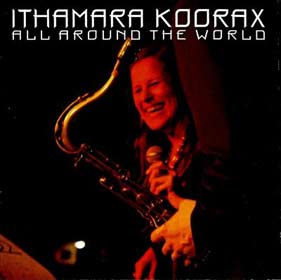 This compilation of live performances reminds me very much of the double-CD of iconic performances of Elis entitled Saudade do Brasil that Cesar Camargo Mariano produced in 1980. The visceral energy of the performances is palpable here. The overall tenor of the performances is of the kind that suggests a strong personal involvement with her audiences. At its core is performances that are dense in their textures, earthy in colour and yet there is also an airiness that is breathtaking. There is also some chaffing at the bit when Ms. Koorax sings Herbie Hancock’s “Butterfly” but she overcomes this in short order to create the intoxicatingly primeval backdrop of the amazon, thereby turning Mr. Hancock’s composition into a creation quite her own.

The instrumental playing throughout the disc has an affecting physicality of folk, whether tugging at your emotions in a lament or stirring at your melancholy feet with the bite of a forró. Ithamara Koorax is very much the chameleonic singer here as well. But she is cast herself very differently here. She is commanding and fragile, singing from the highest reaches of the soprano to the dark and fetching depths of a contralto. Each time she hits the right spot demonstrating just what a haunting and sublimely beautiful singer she is. With its authenticity of atmosphere and quiet ability to move, it is one to lose yourself in on a long summer afternoon or a longer winter night as well.

Although Rio de Janeiro-based vocalist Ithamara Koorax has long been established as a recording artist in her native Brazil as well as in Europe and Japan, it wasn’t until 2000 that American listeners were introduced to her unique vocal stylings on Milestone’s Serenade in Blue. That release helped position her for a 4th-place finish in the Female Singer category–behind Cassandra Wilson, Diana Krall, and Dianne Reeves–in the 2002 Down Beat Readers Poll. Read more…