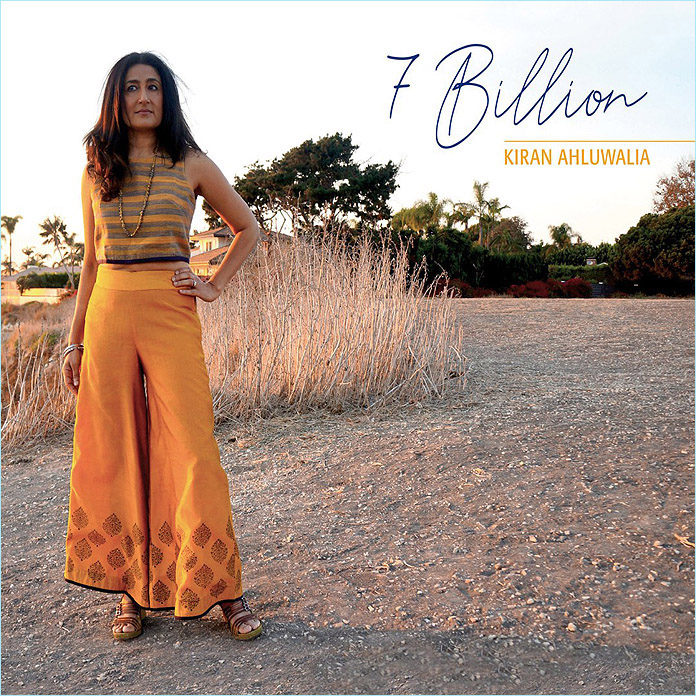 Kiran Ahluwalia occupies a very special place in the vocal music of the Indian subcontinent. Her chameleonic versatility enables her to move seamlessly between classical, traditional (folk), Sufi and contemporary styles. If she chose to, Miss Ahluwalia could also conceivably be a highly successful singer of Bollywood film songs – a unique style exclusive to Indian film music. But her vocal gifts are so flexible that she can swing from naturally flat and sultry vocalastics to an astonishing kind of vocal style that is informed by a stunning coloratura usually natural only to classical singers. Miss Ahluwalia can also employ the most delicate melisma to express the lyric with lattice-like delicacy as she soars into the upper reaches of her vocal range.

Like her other highly successful recordings this 2018 one, 7 Billion comes with an aesthetic that is wonderfully expressed in an easily accessible aesthetic. However, unlike much music by stars similar to her who rule the roost in India, Miss Ahluwalia expresses a wider world view and also inhabits a more universal sound-world. She has, for instance, been expressing her music in a sharply socially-conscious manner longer than anyone else on the music scene. Her Indian sensibility has long-since prompted her to tackle issues such as brother-and sisterhood between the fractious elements of the Indian subcontinent (her husband, producer and guitarist Rez Abbasi is of Pakistani-American heritage). More to the point, on 7 Billion, that is, she does not shy away from gender issues such as in “Khafa” and “Kuch Aur”; nor is she diffident about sexuality and dives right in on “We Sinful Women”.

Much of her electrifying music also has to do with accompaniment by the finest Canadian (Miss Ahluwalia is from Toronto) and American musicians such as her husband, Mr. Abbasi, who has long since contributed significantly to shaping the sound of her music – both as producer and with his singular guitar sound that often melds the whine of a sitar, the viscous fluidity of a dobro and the round dyads of a rock guitar all into one. The other familiar face on 7 Billion is the tabalchi, Nitin Mitta, a mainstay of the unique “Kiran Ahluwalia sound-world”. Davide Direnzo on drums, Mark Duggan on African and other percussion and Toronto’s prodigiously gifted bassist Rich Brown create rhythmic miracles and the great multi-instrumentalist Louis Simao “rocks” the Hammond B3 organ like he was born to rule it, and also uses accordion and synthesizer using the instruments to draw from the myriad colours of a voluptuous musical palette.

Perhaps the one drawback – if one can at all call it that – is that at just over half an hour the album is just a little bit short on time. Having said that though, this wonderful music more than makes up for it.