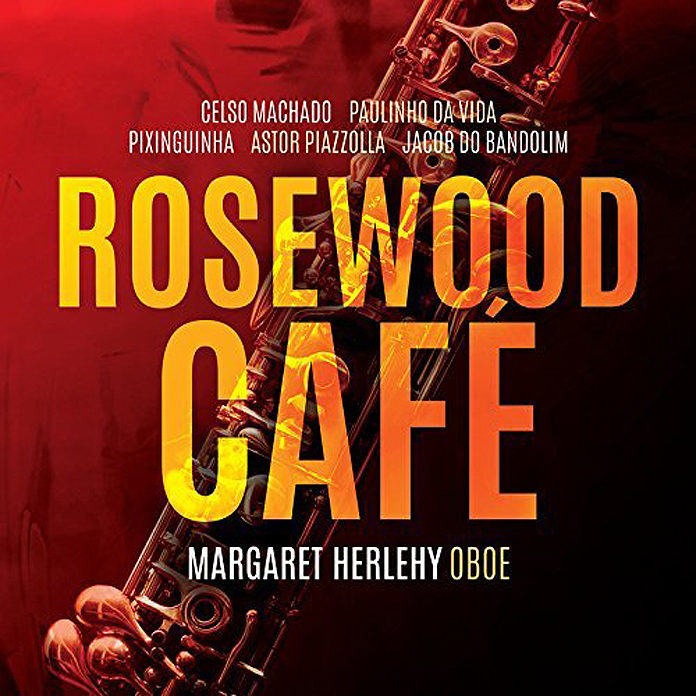 The oboe will do very nicely – thank you very much – for Brasilian music as the traditional one that has been played by Margaret Herlehy on Rosewood Café and it adorns every piece, especially the beautiful choro music here. Its burnished woody sound rivals even the great Luis Rossi clarinet played by Paquito D’Rivera on his records and is uniquely suited to the glorious lament “Choro Negro” from Paulinho de Viola and Fernando Costa; the clarinet, of course, being an important fixture in Brasilian music – most notably choro. Truth be told, one has rarely heard the oboe outside its traditional symphonic space unless, of course, one thinks of Paul McCandless, alone, with Oregon, or the Paul Winter Consort who almost single-handedly not only brought the instrument out of relative obscurity, but also extended the scope of its sound.

Now, it seems that in Miss Herlehy we will surely have another champion of this rather forlorn-sounding instrument. And what a wonderful champion she is. On the face of it she is playing a wooden pipe roughly 65 cm (25.5 in) long, with metal keys, a conical bore and a flared bell. But what a world of sounds Miss Herlehy can create with it. Apart from the extensive range of technique that she effortlessly realizes, the confidence and maturity of her musical language is stunning, and always harmonically and texturally beautiful. And make no mistake, on Rosewood Café we have a truly big performance. This is amplified not only by the resonance in the recorded sound, but more especially in the fact of the cast of musicians that Miss Herlehy has assembled for her sojourn to Brasil.

And although she finds her lyrical heart most often with the guitarist David Newsam – irresistibly so on the music of Celso Machado (while we knew of his abilities, no one suspected just how great they were) – another prodigious musicians here are the pianist Henrique Eisenmann, who oozes genius and youthful impetuosity on “Nachele Tempo” and “Choro Negro”. It doesn’t stop there, of course. Miss Herlehy is also joined by flutist Fernando Brandão, whose glimmering work is heard on “Nachele Tempo” and “Diabinho Maluco”. Negah Santos bursts forth on both features playing the uniquely radiant pandeiro. These are enigmatic studies of Brasilian music, none of which are the easiest nuts to crack, but Miss Herlehy’s insightful colours have the measure of their limpid introspection and fantasy… quite memorably so.