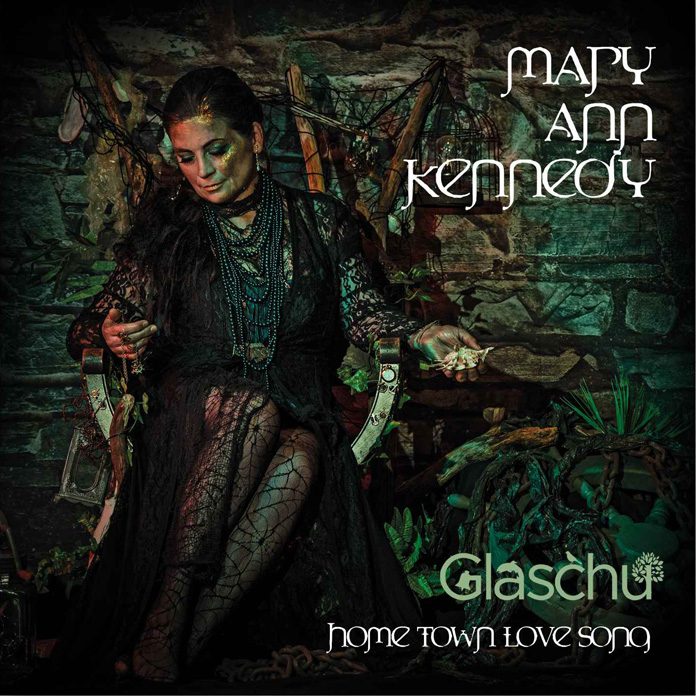 Glaschu, an epic hometown love song, by Mary Ann Kennedy is a glorious record. Simply glorious. A Scot from Glasgow, Miss Kennedy is possessed of a full-bodied, highly expressive and breathtaking mezzo whose music is drenched in the culture of the Celtic Diaspora that has seeped into Breizh (Brittany), Kernow (Cornwall), Cymru (Wales), Mannin or Ellan Vannin (Isle of Man), Éire (Ireland) and the Alba (Scotland) of her birth. As a result the magical repertoire of Glaschu is subsumed by a mistura fina of the delicate and langorous Gaelic idiom with the livelier heritage of the Celts, making each of the songs echo with a vibrancy that’s ravishing, luxuriant and redolent of a soundscape that is by turns meditative and passionate.

Miss Kennedy is a celebrated singer with a light vibrato. She reveals herself as an artist of the first order broadening out from traditional Gaelic repertoire for which she is best known. Her instrument is gorgeous: lustrous, precise and feather-light. Her musicianship is fierce as she digs into the expression of each word – an extraordinary magical experience as she sings in Gaelic – as she brings ceaseless variety to soft dynamics and gives each phrase a special grace. She is accompanied by masterful musicians who bring their own kind of mystic beauty to her enchanting sound-world. While it would be unfair to single out one or two of the

virtuoso musicians presented here, it is impossible not to be floored by the breathtaking performances of the genius of Nick Turner and the inimitable piper Jarlath Henderson. The special treat may be experienced on “Margadh an t-Salainn (Song of the Saltmarket)”.

Mr Turner is a bass player, he seems to morph into a Ghillie Dhu whose low growl belies a shape-shifting and solitary male fairy that’s at once kindly and reticent yet sometimes wild in character. Fortuitously he is charged with the task of “sound design” and it works magically on the aforementioned track. Jarlath Henderson is a legendary Irish uilleann piper whose work has a gleamingly dark tonal quality and he brings a mightily focused sound, with fluid dynamics to a song that many – if not all Celts of a certain generation – were brought up to sing. Both musicians join Miss Kennedy to bring a deeply interiorised reading of the 19th century poet of Scotland’s song of the epic tribal clash. One would be remiss if did not mention the performances of Bill Paterson, and Miss Kennedy’s sister, Wilma Kennedy, both of whose evocative recitations are enchanting and atmospheric.

The sweetness of blend among the musicians held together by the riveting percussive colourings of Allan MacDonald, the guitar and bass of Mr Fraser and Miss Kennedy’s longtime musical partner guitarist Findlay Wells and Lorne MacDougall’s whistles adds much beauty to the works here. The result: each song is a benchmark performance. Each musician – including strings players and vocalists – make this traditional music something entirely new. Meanwhile Mary Ann Kennedy emerges as perhaps the most imaginative artistic touchstone of her generation. No matter where you look and listen, Glaschu is, by any measure, great music-making.