It is becoming ever more routine to meld acoustic and electronic instrumentation, so much so that the resultant musical efforts have begun to sound almost lackluster. However, there is certainly something quite fresh and ear-catching about the music of Niogi on their maiden voyage, Landing. It has to do, no doubt, with a clever mixture of musical ingenuity on the part of each of the contributing members of the group, and superb engineering (predictably) from the great Jan Erik Kongshaug. 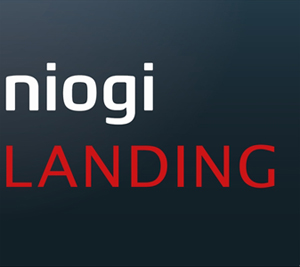 Mindful, perhaps, of the weighty history of electronics in music apropos of the Jan Garbarek Group that that included pianist Rainer Brüninghaus and bassist Eberhard Weber, Niogi have managed to carve out a niche for themselves. They do this through music that is oceanic and inclusive in scope, and informed by a myriad flavours, subtle chord layering and widely varying melodic changes, but without neglecting – thanks to masterful drumming from Utsi Zimring – the rhythmical flow. Although much of the spine comes from the compositions of pianist Guy Shkolnik, there is no shortage of support from his colleagues who bring out the music’s lyrical qualities to the full, with no shortage of momentum where required from their ever-wonderful Norwegian bassist, Per Mathisen. The recorded sound of his bass – no matter which incarnation is played – is fulgent and graphic, and prominent. And what playing! What structural and dramatic power especially through the movements of the ‘Images Suite’, an ambitious piece by Shkolnik.

The spider’s web of counterpoint that characterises Shkolnik’s other music – ‘Getting it Wrong and Right’ and ‘Mercury Enters Virgo’ – accrues with such apparent spontaneity that you might believe the music is created in the moment. This is an illusion, though: Shkolnik’s assiduously tiered dynamics and dovetailed phrases have been observed almost to the letter. The programme also features two pieces by saxophonist and EWI-specialist Omri Abramov. The structure of ‘Jane’s Balloon’ bends gymnastically around harmonic landmarks and the theatrical tension in ‘Faces’ is tempered by balletic lyricism, which plays out in the masterful articulation on Abramov’s woodwinds, given to sustained pitches and chords.

The music of Niogi builds up in energy and momentum to a quite thrilling climax in the ‘Images Suite’. But, perhaps inevitably for music that demands such high levels of precision and accuracy during the rhythmic transitions the final critical piece is always the engineering. By sparing no effort and working with Kongshaug, arguably one of the best in the business when it comes to scrupulous capturing of sound on disc Niogi have gone to great lengths to make an impact right out of the gates.