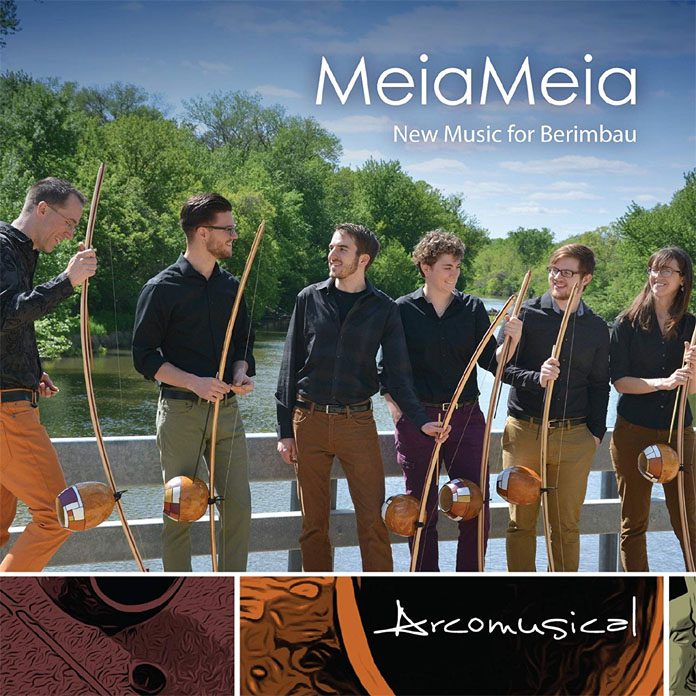 The musicians of the American sextet, Projeto Arcomusical, have dedicated their 2016 release Meia Meia to the legendary Brasilian musician and one of the greatest Ambassadors of Brasilian music to the world: Juvenal de Holanda “Naná” Vasconcelos (2nd August 1944 – 9th March 2016) and justifiably so. For among other things, Naná Vasconcelos single-handedly brought the Berimbau, now virtually ubiquitous, out of Brasil, to the rest of the world. And even though other figures such as the great Brasilian musicians and percussionists Paulinho da Costa and Airto Moreira have performed with enormous zeal and prodigious facility on the instrument, no one has really added to its language and literature as Naná Vasconcelos. But the Berimbau and its storied entry into Brasilian music is fascinating:

Originally from Africa, the instrument was incorporated into the practice of the Afro-Brazilian martial art capoeira and was given its name Berimbau (the soul of capoeira) as it traditionally leads the capoeirista’s movement in the roda —the faster the Berimbau is playing the faster the capoeirista moves in the game. Naná Vasconcelos made it part of his battery of traditional and modern instruments that travelled with him worldwide, creating memorable music on, and for it throughout his career. His passing has not only left the world poorer for it, but left the baton in the hands of a handful of musicians. Not many would have imagined, or likely drawn Vasconcelos’ fabled instrument and its music into the mainstream of modern composed music.

So, already Projeto Arcomusical are probably in a minority of one and the work put in by the composers of this music, Gregory Beyer and Alexis Caitlin Lamb is significant on two accounts. Firstly: it is music that takes “a compositional approach to the instrument which emphasises its melodic and harmonic potential”, as the album notes remind us. And, secondly: the music itself represents wholly new music in entirely different stream that has been composed exclusively for the instrument. This latter fact cannot be emphasised enough. Add to that the fact that it has taken since 1999 to bring the music of a “Berimbau” ensemble together and you have a compelling case for recognising its composers and the players of this extraordinary music.

But the reality is that it has a long time for music such as this (of the written, scored nature) to be brought to fruition. No wonder. It’s fiendish to write for, thanks to the intricate possibilities and limitations of two fingers holding the string taut and moving a coin or stone slowly and/or rapidly up and down the steel string, all the while holding it taut, whilst the fingers of the other hand beat or tap a stick onto the string, or the resonating gourd, or the wooden bow to create its music. So it is almost certain that easy-looking music on paper will be next to impossible to play. However, thanks to the ingenuity, first of the Brasilians, especially Naná Vasconcelos, and now Beyer and Lamb a whole new generation of aspiring musicians will have not only Naná’ Vasconcelos’ genius but also these composers’ work as reference. Alexis Lamb’s use of a caxixi, baqueta, and dobrão in her composition “Um so” is a fine example.

The music on Meia Meia (half-half in Portuguese) is made up of works for solo, duo, trio, quartet, quintet and sextet players. The range of harmonics and pizzicato techniques to exotica such as ‘stick sizzle’ and bi-tone tapping’ (plus a battery of percussion possibilities is utterly mesmerizing. What is creditable also is that Beyer and Lamb have managed to incorporate these fascinating possibilities into their music and not least create transference from the sound from the aural realm to dots on staves – sometimes, as in “Berimbau Trio no. 1: “Harmonica”, even incorporating the hissed shout that Naná Vasconcelos was known to utter while playing. In Lamb’s “Queda de quatro” that follows the percussive elements of the music are wonderfully articulated and performed by Projeto Arcomusical.

The music for multiple players is most fascinating of all because it makes both the Berimbau and this music “larger” than ever, as it is makes for – for want of a more descriptive term – an almost choral-chamber music. Thus in the larger ensemble music – quartet, quintet and sextet performances – the soundworld is so wonderfully big that it embraces the virtually limitless richness of the instrument. Now this is something Naná Vasconcelos achieved on his own, but no one else has approached the instrument with a view of enlarging this soundscape, and thus literature in praise of it but Projeto Arcomusical. And that is the existential value of this repertoire and its capture on record.