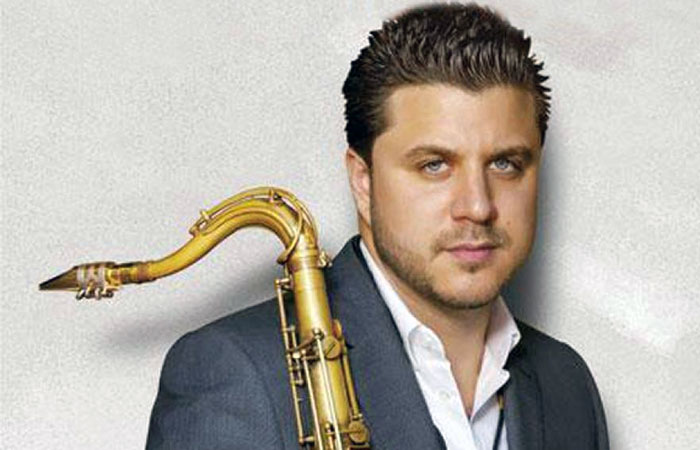 Tango Nostalgias is the new album of the Argentinian saxophonist Julio Botti, a pure and new voice of the tango movement that maestro Astor Piazzolla started in Argentina decades ago. Ten poignant and profound themes are part of this cd where Pablo Ziegler, Piazzolla’s longtime pianist and a prolific composer, is the arranger and pianist. Many things are exciting about this work. One of them is the way the album was produced; Most of the tracks were recorded in Buenos Aires by Mr. Ziegler’s regular trio which includes Quique Sinesi, playing the guitar; Walter Castro, playing the bandoneon; and the maestro himself, playing the piano. Horacio Hurtado (bass) and Quintino Cinalli (percussion and drums) joined this team to put together a wonderful musical production. 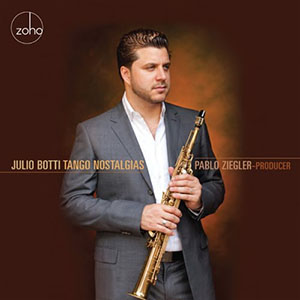 In each song, Julio Botti puts his soul and technique to express all the feeling the tango itself has. The long, precise and emotional notes this Argentinean musician spreads on the air show the respect and love he has for tango music. Julio Botti was born in the tango land where the bandoneon and love are one. Mr. Botti grew up in the little town of Belle Ville, in the province of Córdoba, Argentina. After watching the marching bands many times, the little Julio joined his first musical school called Escuela de Música Popular La Colmena. Later the young Julio would go to other countries to continue learning. Years later, in 1998, Mr. Botti had the chance to move to New York to study the tenor saxophone with Donny McCaslin and Bob Franchescini. In 2002 he went to Havana to study at a conservatory, and in 2003 he started playing with musicians in Madrid.

After studying jazz in different places around the world, Julio Botti started feeling homesick. During his long trip he met other Argentinean musicians who made him think about his roots. The young Julio had many things to express about those times in his little town, in Córdoba (Argentina), but he needed to experience and learn more.

In those days of decision making, Julio knew that the saxophone had never really been part of the tango tradition so he had to play more Argentinean folk music. Finally, in 2008 Julio met Pablo Ziegler. With him the young saxophonist began understanding the tango as a universal jazz language. Julio played with Ziegler’s band during 2009, discovering his passion for tango inside his saxophone.

After years of musical connection with Mr. Ziegler (his mentor), here we have his album, a great sample of talent, discipline and love for his home music. If you get into this cd, you can feel how your heart moves and your eyes change as you listen to each track. Just listen to the song “Elegía Sobre Adios Nonino”, you surely will be moved in the most profound place of your soul by the dialog of Julio’s saxophone sound and Walter Castro’s bandoneon pure voice.

In this work, there is no theme that we can question. Each song is a very structured, harmonious, and moving group of beautiful musical lines where bass, piano, guitar, bandoneon, drums, violin, viola, and sax dance and play together like the children do when it rains, in the middle of a street in a little town.