Despite the praise he receives from critics for his unbridled genius, it will probably be years before the world really catches up to Tcha Limberger. Just when you thought you came to terms with his wizardry on the guitar and his expressive Manouche music, he reveals his genius for czardas. Now you discover he is the master of czardas, but soon you find he has excelled at music of Kalotaszeg. You experience the thrill at this discovery but it isn’t long before he also has mastered the Magyar Nota style of Budapest with celebrated primas Horvat Bela. And now Mr. Limberger and his Hungarian Gypsy Orchestra. He has moved his reputation as the king of Gypsy music with the brilliantly produced Fekete éjszaka borulj a világra (Black night please fall over the world) his best record yet. 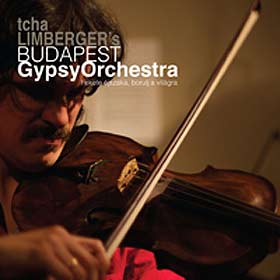 So Tcha Limberger’s stock has increased beyond all expectation after performance of the achingly beautiful Fekete éjszaka borulj a világra (Black night please fall over the world). Not many thirty- (okay) perhaps forty-something musicians can lay claim to capturing the heart of audiences in Britain and Europe the way celebrated Gypsy musicians of the past have done so. Certainly no one since even Birélli Lagrène ought to conquer America with such pomp and circumstance as Tcha Limberger. If this does not happen tomorrow it surely must in the months to come. A genius such as his will not be denied. And yet it will be years before we catch up to it this side of the pond.

But here, the true test of Mr. Limberger’s creative prowess is to be judged against his ability to sustain such lyrical and transcendent serenity over the course of an entire recording. That impression only intensifies as the colours grow richer with the progress of the album. This programme recalls both the nature of a tradition that swept Brahms and Bartok off their feet and I would even go as far as to say that in emotion and mood it is made of the same rich tonal colours of the great Lieder of the 18th and 19th centuries. Most remarkable of all Mr. Limberger’s vivid performances will drive many a musicologist to examine the traditional texts in order to appreciate the violinist’s sudden bursts of vocal colour. Moreover, throughout the programme Mr. Limberger gives the characters in the songs a near-physical presence.

The music here is luminous and in many respects the actual title song Fekete éjszaka borulj a világra (Black night please fall over the world) typifies this character. But this is also true of the rest of the music, which despite its impossible-to-pronounce Hungarian titles, still stirs the soul. It is Tcha Limberger who imbues the melodic lines of each of the songs with a wonderfully sustained quality. But it is also true of the quartet that the violinist fronts here who pull out all the stops at the right moments. As a group – and ultimately we must consider them so – the Budapest Gypsy Quartet (in solo and ensemble passages) creates plenty of drama and dynamic control in the songs that seem to bring a way of life considered almost dead, alive again.

Track List: Rácz Bela emlékére (In memory of Rácz Béla); Szomorúan zúg-búg a szél (The sad sound of the world); Fekete éjszaka borulj a világra (Black night please fall over the world); Klarinét szóló (Clarinet solo); Csókolom a kis kezedet (I kiss your little hand); Cimbalom szóló (Cimbalom solo); He lem lenne nepfény a virág sem nyilna (If there were no sunlight, flowers would not blossom); De szeretnék, de szeretnék (Oh how I would like, Oh how I would like); Cello szóló (Cello solo); Szakadozó, rongy vonódat mit sajnálod! (Don’t pity your old bow); Kiballagok a vasúthoz (I saunter out to the railway station).

Since picking up his first instrument the guitar, composer, singer and multi-instrumentalist Tcha Limberger is one of a handful of world class musicians to have become accepted and respected in a style of music culturally not their own. His showcasing on the international stage of his Transylvanian Kalotaszeg Trio and Budapest Gypsy Orchestra, and his nurturing approach to teaching almost forgotten traditional musics has made him one of the most prominent and ‘important figures in folk music of the Carpathian Basin’. Read more…