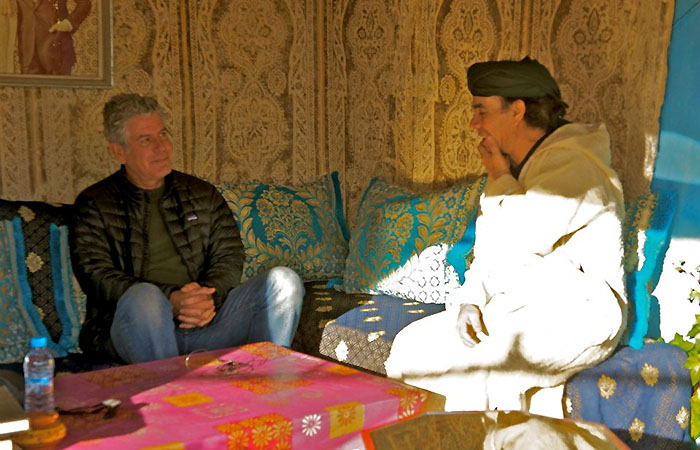 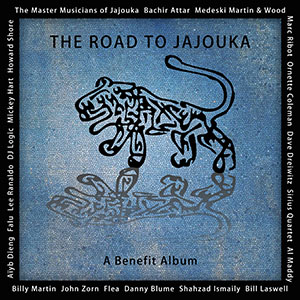 The master musicians of Jajouka have existed in the southern Rif Mountains of Morocco for over 4000 years; their music celebrated largely by the populations around their village. The only Europeans and Americans outsiders to discover them were possibly the writers Paul Bowles and William Burroughs until—in 1971—Brian Jones of the Rolling Stones discovered them and made a record with them, called The Pan Pipes of Jajouka. The next significant recording was Ornette Coleman’s Dancing in your Head (1973), followed by The Master Musicians of Jajouka (1974) and these were followed by the next noteworthy recording, Apocalypse Across the Sky by Bill Laswell with the Master Musicians. Many other recordings have been released, all celebrating the Musicians, but The Road to Jajouka is significant because it also has an altruistic motive: to raise money to continue to keep that secret culture alive and to provide healthcare for aging musicians—all of which hopes to stop the radical decline of this wondrous musical culture. All profits from album sales will benefit The Jajouka Foundation, a non-profit organization established in 2013 to foster awareness and preservation of this ancient ceremonial music.

On this record as in those mentioned earlier, there is a dramatic collision of cultures. This should also come as no surprise as the Master Musicians of Jajouka have, by now, come to understand the process of musical osmosis with a sense that suggests considerable degree of fine tuning. What is surprising is how well the European and American musician adapt to this complex enharmonic musical system. The dramatic meeting of minds remains Ornette Coleman and Bachir Attar and music where Bachir Attar is present in some shape or form. His majestic narration on “Hand of Fatima” is one of the tracks that stand out as does his chart with Mr. Coleman “Jnuin” as well as “Ghaita Blues,” with drummer Billy Martin, bassist Dave Dreiwitz and guitarist, Al Maddy. Two other outstanding charts here refer to the meeting of minds between the East Indian singer Falu and the Master musicians. This certainly has the hand of Bill Laswell in no small measure. It was Mr. Laswell who practically “discovered” the Indian singer and facilitated her wings to fly. What Falu brings to the trance music is Indian spirituality that is equally, if not older than the tradition of Jajouka. And then there is her floating lyricism that unwinds like a fabled snake, uncoiling and captivating everyone who hears it, as she chants Sanskrit Shkolas. It seems the Ghaita, that Jajouka oboe, also produces a frequency of sound similar to the shenai of Northern India, seeming to further facilitate a comfort zone for Falu’s celestial voice.

While the saxophonists emulate ancient sounds, it is the bass and drums that facilitate the trance consciousness, in this instance. The incessant rumble of drums—African or American—and the drone of the bass seem to egg the ghaita and the other woodwinds and flutes of the Master Musicians on to the dizzying heights of their repertoire. In this respect it is the incredible work of Billy Martin, Aïyb Dieng that is hauntingly beautiful. The guitarist Lee Ranaldo is another one of those musicians who seems to have found the right sonic platform from which he launches himself as he runs riot alongside the drummers of Jajouka. His visceral sound seems made for the music and Mr. Ranaldo, finding inspiration in the accelerating drums lets his music soar above the Rif Mountains like an eagle. The chart, “Into the Rif” is also spectacular not the least because of the outstanding primordial wailing of the Sirius String Quartet. Finally, there is a mighty score for “Al’Aita,” which suggests that this music might also have its day in the auditoriums of Europe someday. For now there is this awesome recording, to dive deeply into and certainly cherish.

The Master Musicians of Jajouka

Jajouka is an ancient village perched above a long valley in the blue Djebala foothills of the Rif Mountains in northern Morocco. The village is home to the Master Musicians of Jajouka as well as the sanctuary of Saint Sidi Ahmed Sheikh, who came from the East around 800 AD to spread Islam to North Morocco. As founding members of the village of Jajouka, the Attar family maintains one of the oldest and most unique surviving musical traditions known on the planet. The music and secrets of Jajouka have been passed down through generations from father to son, by some accounts for as long as 1,300 years. Read more…