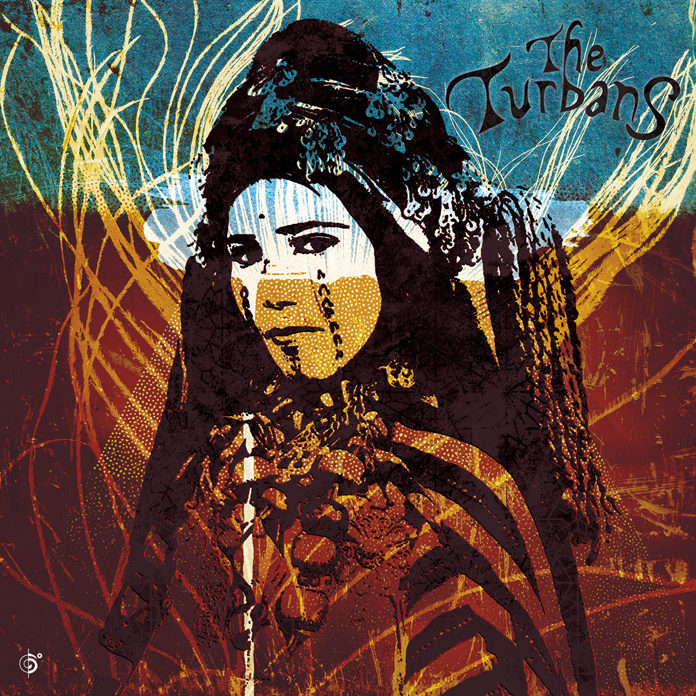 The Turbans, a large England-based ensemble have, in their remarkable music and on this their eponymously entitled recording, created a vast network connecting jazz, klezmer, Moroccan, rai, gnaoua, Sufi and other Middle Eastern music that collides in an explosive earthy, yet mystical style that makes most contemporary, so-called World Music, seem pallid in comparison. Yet, somehow, to call it “world-music” or to even suggest it is network connecting many musical styles would give the impression of overcooking. This music is, after all, a masterpiece of subtlety by an quirkily named ensemble that is rooted in a rather real future musical topography, looking back at a rich and colourful musical born of a myriad cultures; a musical ornament that could well be designed anywhere in the world, but is, in fact, almost classically contemporary British.

In song after song you feel as if in just a couple of beats a latch is slipped and you are swept into some kind of musical portal that opens out into an effervescent musical world woven by threads of numerous musical idioms. Invariably guitars and percussion collide to ignite music with a rippling (usually) African, Middle Eastern or sometimes Indian groove. But just when you think you can guess where the melody or rhythm is going, out pops a funky new phrase and line from the violin, oud or guitar – or all of the above, glued together by a veritable battery of percussion – taking the music somewhere else. Surprises abound in “Sinko Moy”, “Kansianitsa”, “Hamouda”, “Chubby” and especially in “Hackney” where the band swings mightily, launching itself into a broodingly percussive tumbling groove.

No one, and everyone, leads the music. And each of one in turn continues to ring the changes in mood, structure and tempo, making for a constantly interesting programme. There is a considerable degree of balance and integration of melody, harmony and rhythm, of composition and improvisation, of deep exploration, individuality and tradition. All of this is impressively maintained throughout the disc. The music is contagiously melodic and this makes for a sparkling show with party-time thrills and spills at every turn. Through it all The Turbans maintain a high-wire act that is effective and enviable with music sounding as if it were born of a gnaoua cleansing ritual, a gamelan, played with pizzicato harmonics and a delicate curlicue of a bass line that goes on to herald the coming of an Indian wedding party, celebrated Bollywood-style at a rave party under a bright, white moon on a beach, somewhere in Goa. It’s a disc to die for…